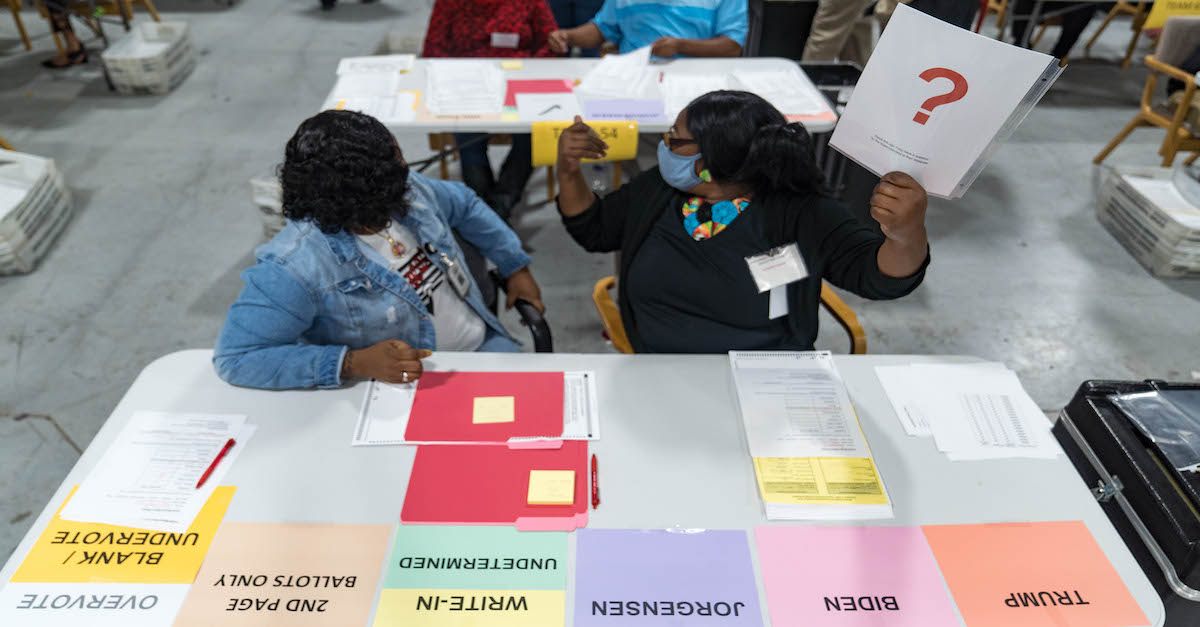 Two Gwinnett county workers raise a card that lets the officials know they have a question as they begin their recount of the ballots on November 13, 2020 in Lawrenceville, Georgia.

A Georgia judge has dismissed a lawsuit brought by Donald Trump supporters who sought to inspect some 147,000 absentee ballots, claiming that the 2020 presidential election was tainted by voter fraud.

In a 14-page ruling Wednesday, Judge Brian Amero said that the plaintiffs in the case simply didn’t have standing to sue.

“[E]ven if the Court construes the allegations in Petitioners’ pleadings, including their attached affidavits and exhibits, in the light most favorable to them, the Court is constrained to Conclude that Petitioners lack standing to pursue their state equal protection and state due process claims,” Amero wrote.

The plaintiffs, led by Garland Favorito of the “election integrity” organization VoterGA, claimed equal protection and due process violations.

Favorito had originally sued Fulton County, the Fulton County Board of Registration and Elections, and the Fulton County Clerk of Superior and Magistrate Courts. Amero dismissed those claims in July, but allowed Favorito to sue individual members of the county’s election board.

Favorito argued that his vote and the votes of others were diluted by the “‘substantial likelihood’ that fraudulent ballots were introduced during ballot processing for the General Election,” and that the Fulton County election board “negligently oversaw” this process.

Amero disagreed, and looked to a recent U.S. Court of Appeals for the 11th Circuit ruling in a case with similar allegations for support. The plaintiff in that case, led by pro-Trump “Kraken” lawyer Lin Wood, also claimed vote dilution.

“The 11th Circuit, in a unanimous opinion written by Chief Judge William Pryor, disagreed,” Amero wrote. “Although it recognized that vote dilution could be a basis for standing, such as in malapportionment and gerrymandering cases, the 11th Circuit also noted that these cases typically required the plaintiffs to be compared to another group of voters,” adding that “no single voter” is specifically injured if a vote is improperly counted.

Amero noted that judges across the country found that plaintiffs making similar allegations, ostensibly related to voter fraud in the 2020 election, also could not state a claim for a particularized injury, and therefore did not have standing to sue.

“Other cases that have tangled with the issue of vote dilution in this context have concluded similarly,” Amero wrote, citing election-related cases in Arizona, North Carolina, and Vermont.

Amero’s ruling is the latest legal defeat for people seeking to challenge the results of the 2020 presidential election. Judges in at least eight states have dismissed dozens of lawsuits alleging voter fraud, and conspiracy theories about widespread voter fraud have been repeatedly debunked.

In Georgia, officials conducted three audits of the 2020 election ballots, none of which revealed evidence of widespread voter fraud. The Peach State ultimately went to President Joe Biden, marking the first time a Democratic presidential candidate won over Georgia voters since Bill Clinton in 1992.

Robb Pitts, chairman of the Fulton County Board of Commissioners, called Amero’s decision “a win for democracy,” according to a report in the Atlanta Journal-Constitution.

“This lawsuit was the result of the ‘big lie,’ which is nothing more than a meritless conspiracy theory being spread by people who simply cannot accept that their side lost,” Pitts said in a statement.

Favorito told the Journal-Constitution that he plans to appeal.

“All citizens of Georgia have a right to know whether or not counterfeit ballots were injected into the Fulton County election results,” Favorito said, according to the paper. “It is not adequate for any organization to secretly tell us there are no counterfeit ballots and refuse to let the public inspect them.”

As the Journal-Constitution report noted, the case was highly political throughout. Favorito had sued five election board members—three Democrats and two Republicans. Favorito had wanted the case to proceed only against the Republican members, who didn’t oppose the ballot review. While only the Democratic members brought the motion to dismiss, Amero applied his ruling to all five board members.

You can read Amero’s ruling, below.