A transcript of a rare Sunday hearing in Sidney Powell and Lin Wood’s so-called “Kraken” lawsuit in federal court in the Northern District of Georgia says that the state feared a “security risk” if an attempted forensic review of voting machines, as proposed by Powell and her team, was to occur. In the words of one attorney representing Georgia officials to the federal judge overseeing the matter, “you cannot allow, during the midst of an election cycle, a third party to come in and get the proverbial keys to the software kingdom.” That attorney for the state went so far as to say that “Powell’s minions” could “go in and image everything, download the software, and figure out for future elections a way to hack in so that their preferred candidate can win.”

The case is one of several filed by Powell, Wood, and other Donald Trump allies in attempts to flip the election to favor Trump. Powell and Wood have claimed in multiple press conferences that Trump won the 2020 presidential contest in a “landslide” but have failed to convince any court to take any action which would upend the results of the contest, which went to President-elect Joe Biden.

(1) Sidney Powell Couldn’t Get Her Camera to Work.

Though Powell has no trouble speaking her mind in front of cameras, her own camera apparently wouldn’t work on Sunday. Per the transcript:

You can add technology to the list of things to trip up Powell in various cases nationwide.

The judge overseeing the case, Timothy C. Batten, Sr., asked the state why it objected to Powell’s requests for a restraining order and an injunction against any alterations to the machines. The answer was because a series of runoff elections were quickly approaching and that the machines had to be prepped to be ready for them. Again, the transcript: 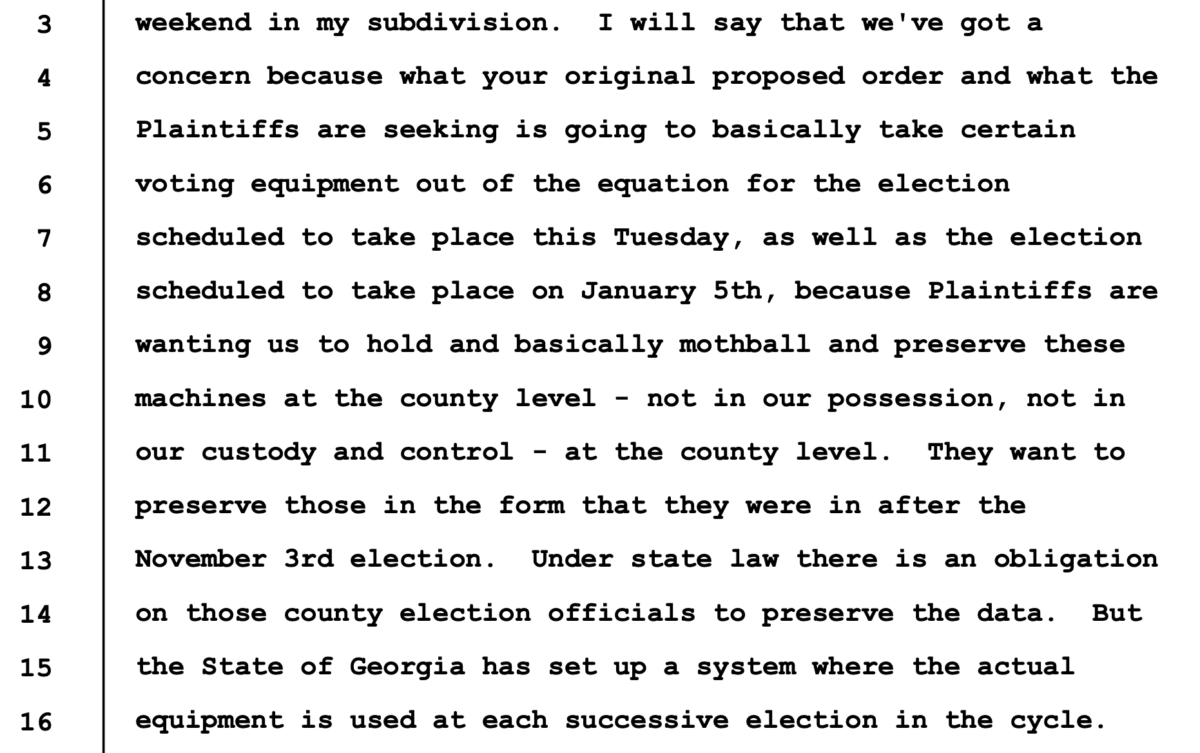 The election being referenced was, as the state described, “any local race that is still out there” as of Tuesday, December 1. Some of those races included contests for local district attorneys. Georgia also has runoff elections looming in the near future that will determine the balance of the U.S. Senate. (Powell and Wood held a press conference on Wednesday urging Trump supporters in attendance not to vote in that election because, in their view, the voting machines are not to be trusted.)

(3) The State Barely Had Time to Prepare.

Lawyers for the state defendants said they were scrambling to prepare for the Sunday hearing after Powell and her team filed requests just before midnight on Friday to prevent voting machines from being touched. The attorney’s words were not necessarily amiable:

(4) The Judge Seemed At Least Willing to Let the Plaintiffs Gather Facts.

One of the arguments was over whether the plaintiffs sued the proper defendants. Since counties maintain physical control of local machines, the state said individual counties should have been sued. “It seems to me hard to believe that the Plaintiffs should have to sue 159 elections commissioners to get the relief they want,” the judge asked the state at one point. Powell and Wood eventually said they would add additional defendants to the case.

(5) Powell Argued She Needed to Examine Machines in 10 Counties. 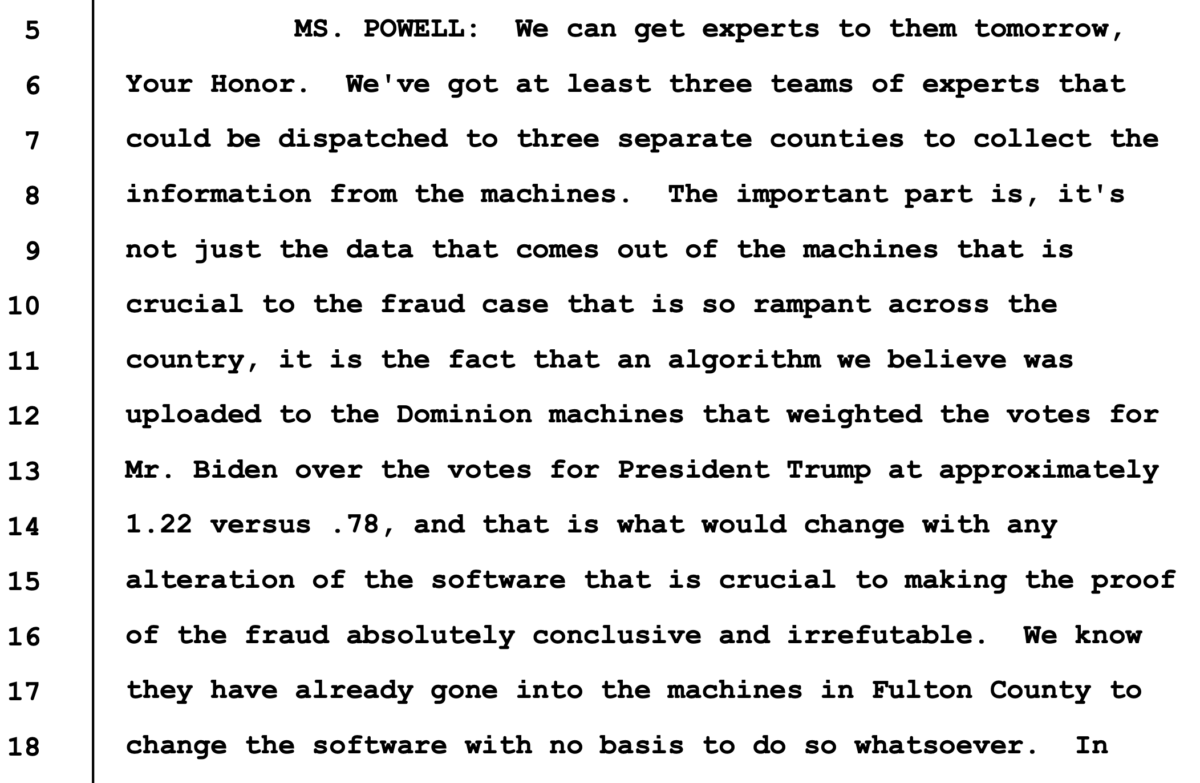 Note that Powell twice in the above passage referred to her case as a “fraud” case. She also uttered that phrase elsewhere during the hearing despite other attorneys allied with Trump saying their respective cases were not fraud cases.

Regardless, Powell said she’d heard from another attorney who claimed to have a witness with concerns about the process. That’s where the state shut her down for uttering “innuendo and accusation,” rather than “facts and law”: 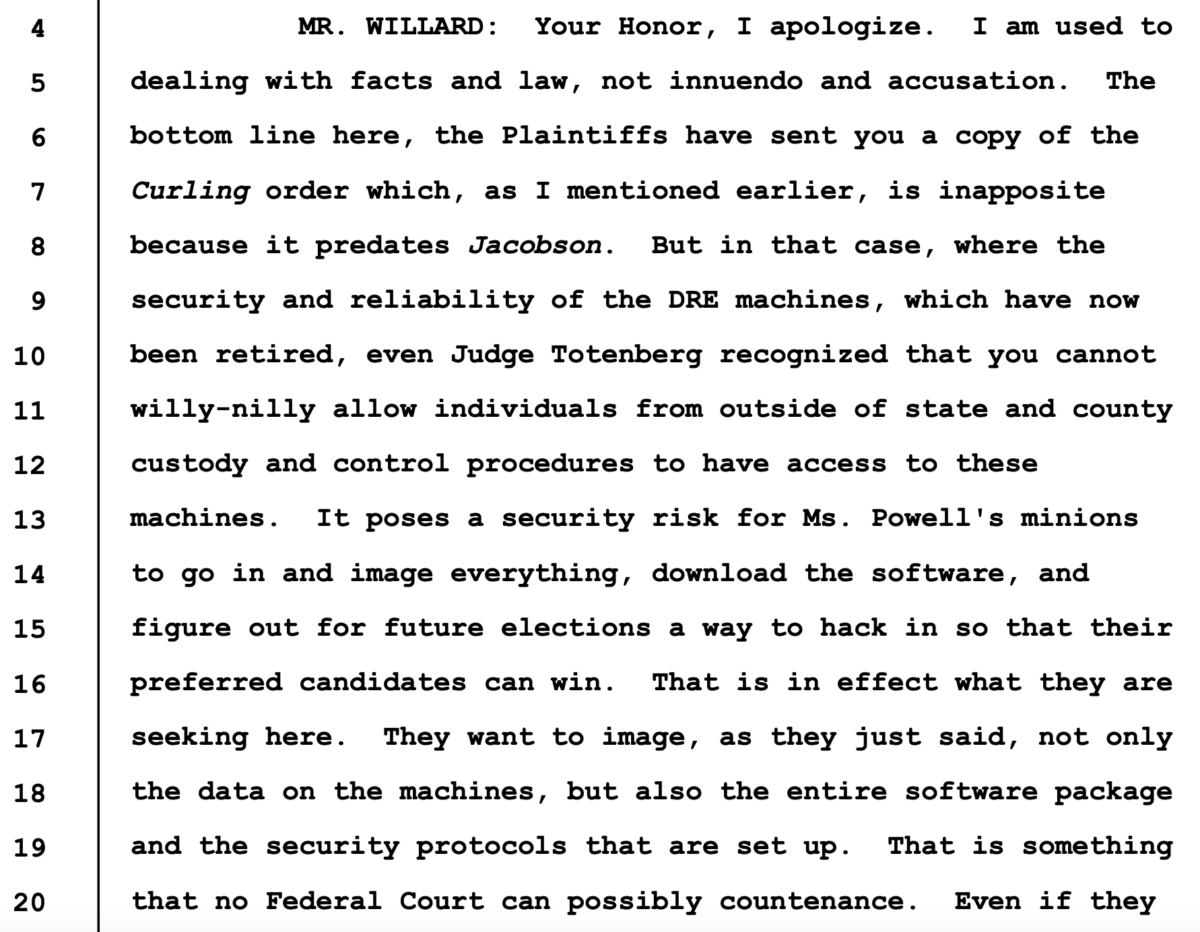 The argument went on to suggest that Powell could not be allowed the “keys to the software kingdom” (as referenced at the beginning of this report). The attorney for the State of Georgia, Russell David Willard, then referenced a procedure for examining elections in Virginia. There, a so-called “white room” was established “where experts were only permitted to go in and inspect a single machine at that white room after security protocols were set in place where they couldn’t remove anything from there” or “take anything that could later compromise the system.”

Powell shot back that it was “a little bit late to be worrying about the compromise of the system,” then repeated her oft-told claims that “both Iran and China were hacking into the system during our election” and that the system used in the State of Georgia was designed to help Hugo Chavez cheat in Venezuelan elections.

The court asked the state whether “proprietary information” was contained on Georgia voting machines “that should not be publicly disclosed.” Willard, the attorney for the state, said there was, and that security protocols needed to be followed.

The judge then cut into Powell directly, saying that her “allegations of worldwide improprieties regarding the Dominion voting machines . . . are supported by precious little proof.”

The judge then shut down Powell’s request for a temporary restraining order or injunctive relief with these words:

Lin Wood jumped in and tried to limit the request—saying that if the defendants had nothing to hide, they would welcome having their system rigorously tested. The judge denied the request again, but Wood kept talking, saying that a limited review might be helpful, and that any data retrieved would be turned over to the court to alleviate the state’s security fears.  (Wood admitted that his review may turn up nothing nefarious whatsoever.)

Powell then told the judge that her team had uncovered alleged trouble in the Wolverine State: 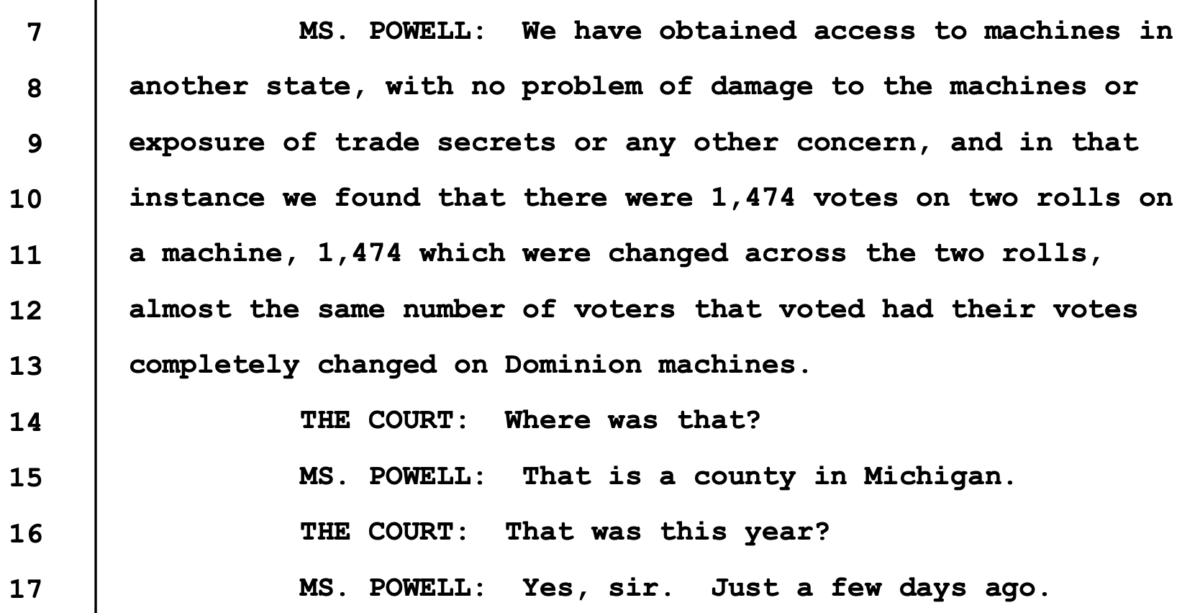 The state accused the plaintiffs of trying to “shift the ground underneath” its feet with a constantly changing series of last-minute requests. The state accused Powell of being “long on rhetoric and short on any [legal] authority.”

The judge chiseled out a decision after much back-and-forth (and pleading by Wood). Future briefs and hearings were also set. Here is some of the order, per the judge:

Machines were thus ordered to remain untouched in Cobb, Gwinnett, and Cherokee Counties.

Powell and her team responded to the possibility that a county actor could mess with voting machines since only state actors were directly named as defendants and thus enjoined by the judge. The plaintiffs said they believed the machines were state property and that county elections officials were under the control of the Secretary of State and, thus, if anyone tried to “play a game,” then the plaintiffs would move for sanctions.

Late Wednesday, the 11th Circuit Court of Appeals announced it was taking control of the case but that it had questions about jurisdiction. (The interlocutory appeal was previously authorized by the district court because of the novel questions presented by the case.) Powell and her team were ordered to file briefs by midnight Wednesday. Briefs by the state are due by midnight Friday, and any reply brief by Powell is due by midnight Sunday.

Read the transcript below.

Editor’s note:  This piece was updated shortly after initial publication to include details about the interlocutory appeal to the 11th Circuit.