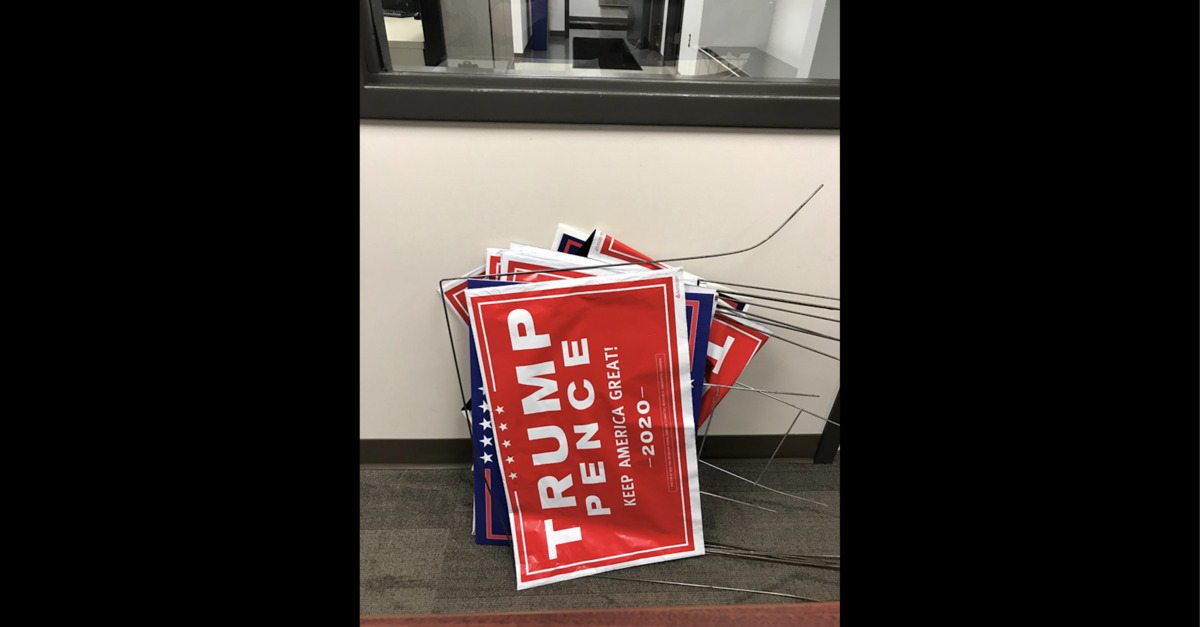 A young woman from Upstate New York was arrested on Thursday after allegedly stealing political yard signs from multiple lawns.

According to the New York State police, 19-year-old Olivia R. Cinquinio was “[c]aught red handed with stolen political signs” and later admitted to committing the crime.

The press release issued by law enforcement does not specify which candidate Cinquinio was allegedly targeting before being apprehended–but a photograph included in the news bulletin gives a fairly decent suggestion; most of the yard signs appear to be in support of President Donald Trump‘s reelection campaign.

Troopers say they were originally dispatched to Clarence, N.Y., about half an hour east-northeast of downtown Buffalo, in order to respond to a call regarding theft of lawn signs in progress during the final debate between the 45th president and former vice president Joe Biden.

The responding officers said the person who complained to them was following the alleged thief in their own car before the troopers themselves initiated a traffic stop after being able to see some of the stolen signs in question.

“While patrolling to [the] location, the complainant started following the suspect vehicle on Main Street and turned onto Transit Road when Troopers initiated a traffic stop,” the press release notes. “Troopers observed multiple political signs in plain view while interviewing the operator, Cinquinio who later confesses to stealing signs off multiple yards.”

Cinquinio was then arrested and charged with petit larceny–the lowest-level theft offense in New York State law. The charge is a Class A misdemeanor in the Empire State with a maximum penalty of one year in prison and/or a $1,000 fine. Imposing the maximum penalty for any crime–let alone a non-violent minor personal property crime–is exceedingly unlikely.

Yard sign theft is a perennial aspect of the American electoral experience and have been especially amplified and pronounced during the Trump political era.

In November 2016, a then-79-year-old woman in Kansas was repeatedly the target and victim of anti-Trump yard sign theft. Her plight elicited multiple stories from multiple media outlets. Notably, theft of Hillary Clinton signs during that same election was also very common.

In a bizarre moment from 2018 with First Amendment implications, Marion Stanford‘s anti-GOP/anti-Brett Kavanaugh yard sign was stolen by local police in Hamilton, Texas–instantly catapulting her story into the national spotlight as the midterm elections were then just one month away. After a massive media backlash, the yard sign was returned to its owner.

Expressions of anti-political symbolism have also often resulted in more extreme alleged crimes over the past few years.

In August 2019, an art gallery owner was allegedly assaulted by a large group of youths over his “Make America Great Again” (MAGA) hat.

Last month, two women were charged with a hate crime for stealing a MAGA hat from a seven-year-old–an incident that was caught on tape.

Cinquinio was issued a bench notice and is currently slated to appear in court on November 3–which just so happens to be Election Day.