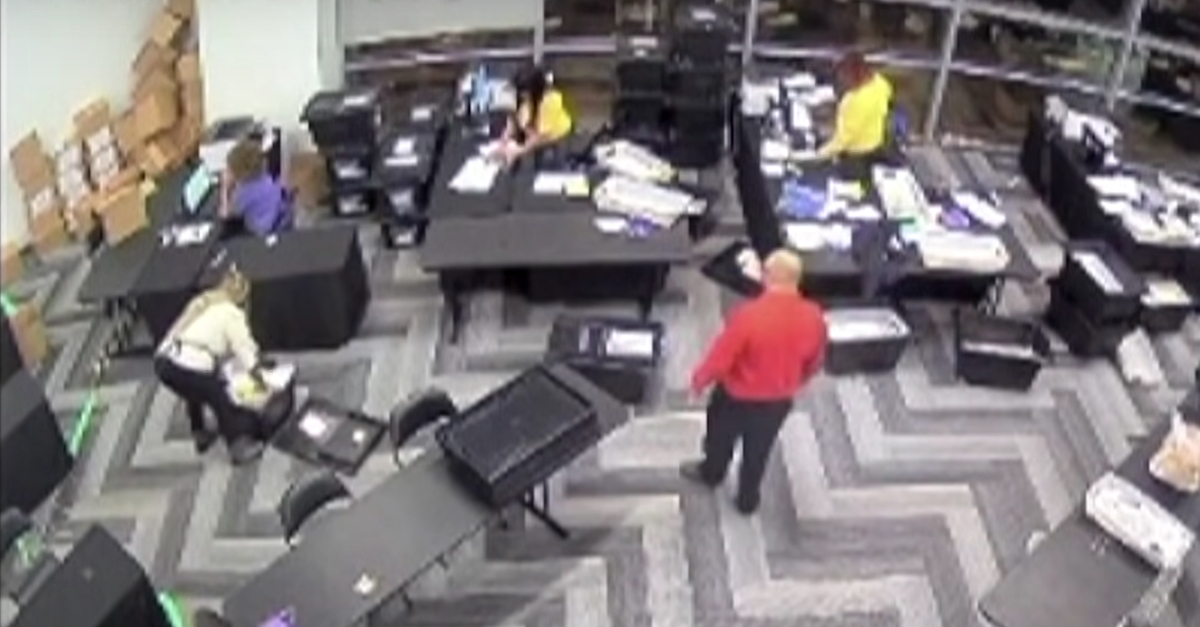 Surveillance video from Atlanta’s State Farm Arena was seized upon by critics of the 2020 election. Officials have repeatedly said it shows no irregularities in the ballet counting process. (Image via WXIA-TV/YouTube screengrab.)

A federal judge in Missouri on Monday pushed a lawsuit filed by two Georgia election workers against The Gateway Pundit back to a Missouri circuit court for additional proceedings.

Plaintiffs Ruby Freeman and Wandrea Moss filed the case against James Hoft, Joseph Hoft, and TGP Communications LLC (the business which operates The Gateway Pundit) in December 2021. The suit  alleges two counts of defamation (one involving Freeman, the other involving Moss) and one count of intentional infliction of emotional distress. It seeks nominal damages, compensatory damages (including general, actual, consequential, and special damages), punitive damages, attorneys’ fees, and costs, but no dollar amounts are listed.

The lawsuit also seeks other forms of relief:

Declarative relief stating that the statements authored and published by Defendants identified within this Petition, individually and collectively, were and are false;

Injunctive relief enjoining Defendants to remove their false and defamatory statements about plaintiffs from any website and/or social media accounts under their control.

The lawsuit opened by pointing to the big-picture realities at play — and their effects on individuals:

The intentional dissemination of known falsehoods aimed at sowing doubt about the integrity of our elections threatens our very ability to function as a democracy. These falsehoods also destroy the lives of America’s election workers, whose service to our system of government places them in the crosshairs of those who seek to undermine it with their disinformation. Plaintiffs Ruby Freeman and Wandrea “Shaye” Moss have been the targets of such a campaign of lies, accused by Defendants James Hoft, Joseph Hoft, and The Gateway Pundit of committing ballot fraud to alter the outcome of the 2020 presidential election in Georgia. The lies about Ms. Freeman and Ms. Moss have not only devastated their personal and professional reputations but instigated a deluge of intimidation, harassment, and threats that has forced them to change their phone numbers, delete their online accounts, and fear for their physical safety.

The lawsuit then argued that The Gateway Pundit proffers itself as a source for “true” content but actually delivers the opposite: “Defendants are among the leading purveyors of false information in the United States, spreading baseless conspiracy theories and disinformation for fame and fortune.”

The Gateway Pundit has been identified as the top producer of false content during and after the 2020 presidential election. In the fourth quarter of 2020, The Gateway Pundit raked in ad revenue by achieving 7.2 million shares on social media of its bogus election fraud stories—far more than the social media shares for such national news sites such as The Washington Post, NBC News and NPR.

“This action seeks to hold Defendants accountable for just some of their knowing lies—their false and endlessly repeated accusations that Ms. Freeman and Ms. Moss committed election fraud by, among other things, conspiring to empty the room where they were counting ballots of poll watchers, producing secret ‘suitcases’ full of illegal ballots, and running those ballots through vote counting machines multiple times,” the lawsuit continued.  “Within 24 hours, the claims had been publicly and definitively refuted by Georgia elections officials through a detailed explanation of what the misinterpreted video actually showed: no suitcases; no illegal ballots; no voter fraud.”

The consequences, the election workers asserted, were allegedly stark: “Ms. Freeman, at the recommendation of the FBI, fled her home and did not return for two months.”

“On at least two occasions, strangers showed up at her grandmother’s home and attempted to push into the house in order to make a ‘citizens’ arrest,'” the lawsuit asserted.

The defendant, however, accused the plaintiffs of “hav[ing] coordinated closely with the media” while bringing the lawsuit and of “demonizing Defendants in the most extreme ways possible.”

The defendants also asserted the potential attorney fees in the case would “be enormous” (emphasis in the original): “Plaintiffs have retained no fewer than four (4) law firms, the Media Freedom & Information Access Clinic at Yale Law School, ten (10) lawyers, and two (2) Yale law students to represent them.”

Several of the defendants tried to remove the case to federal court based on a particular quirk of diversity jurisdiction (that is, “where no defendant holds citizenship in the same state where any plaintiff holds citizenship”) called “snap removal.”

In this case, the plaintiffs are from Georgia, and the defendants are from Missouri and (allegedly) Florida, at least according to the addresses on the original complaint. So, the parties were diverse, but there was another issue at play: the “forum defendant rule.” Defendants generally cannot remove lawsuits that don’t involve true federal questions to federal courts based solely on diversity jurisdiction when at least one of the defendants is “a citizen of the State in which such action is brought.” In other words, even when the parties are diverse (again, where no plaintiffs and no defendants are citizens of the same state), a defendant cannot remove a lawsuit from the courts of his own state. And here, that’s what became a partial issue:  the Georgia plaintiffs sued two Missouri defendants and one Florida defendant in a Missouri court. Diversity existed, but two of the three defendants were (allegedly) in the proper forum state.

That’s a rather clear-cut legal issue under the relevant federal statutes (28 U.S.C. §§ 1332 and 1441, to be precise), but the timing of the removal — called “snap removal” by the courts — made things a bit trickier this time around.

The plaintiffs filed the lawsuit in state court on Dec. 2, 2021. The defendants in Missouri (James Hoft and TGP) were served quickly on Dec. 6, 2021, but the defendant in Florida (Joseph Hoft) wasn’t served until Dec. 14, 2021. The defendants tried to use “snap removal” process to pull the case out of the local courts and into federal court before being served. They filed to remove the case on Dec. 5, 2021, before they were served.

The plaintiffs also argued that the sole defendant with a Florida address was actually a citizen of Missouri, not Florida; the defendants contested that assertion. That issue was ultimately an aside, though; a federal judge said snap removal wouldn’t work this time around.

On Monday, U.S. District Judge Henry Edward Autrey, a George W. Bush appointee, ruled that the case needed to go back to the City of St. Louis’s circuit court system in Missouri. The crux of the issue was that the defendants sought to remove the case before they had actually been officially served with the original lawsuit.

Judge Autrey noted that there was “tension between the plain text” of the removal statute cited for the “snap removal” process and that statute’s “presumed purpose.” The rules allowing for “snap removal” are mostly designed to protect against the filing of bogus claims against defendants that plaintiffs have “no intention of serving” merely to keep the case in federal court.

Here, that was not an issue, Judge Autrey pointed out, and the judge said some of the case law on point did not bode well for hypothetical defendants “engaging in procedural gamesmanship to keep the case out of state court.”

“The Court concludes that diversity jurisdiction is not properly present in this case because Defendant Joseph Hoft removed it before any defendant was served,” Judge Autrey wrote. “Further, a district court is required to resolve all doubts about federal jurisdiction in favor of remand.”

“Plaintiffs filed the action in state court on Thursday, December 2, 2021, and Defendant Joseph Hoft removed a mere three days later on Sunday, December 5, 2021 before any defendant had been served,” the judge reasoned a little earlier in the order. “Therefore, under this Court’s interpretation of the forum defendant rule, the Court cannot maintain jurisdiction over this suit based on diversity, and Plaintiff’s Motion to Remand will be granted.”

The same two election worker plaintiffs are also suing Rudy Guliani in a similar case. That case remains in federal court in Washington, D.C.  Several defendants connected to the One America News Network recently settled their end of that case on what the parties called “fair and reasonable terms.” However, the litigation against Giuliani has continued. Giuliani on Monday filed a motion to dismiss the case and leaned heavily on the First Amendment to support his speech about the 2020 election while so doing.

The original petition in The Gateway Pundit case and the federal judge’s opinion on remand are both here: