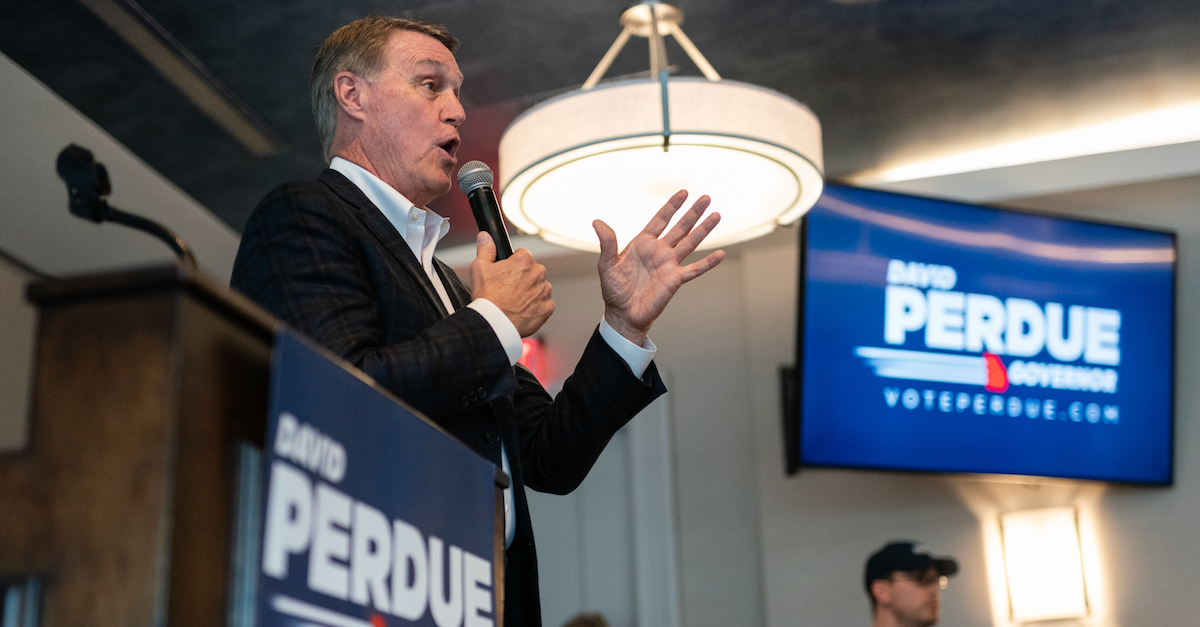 Late last year on Dec. 10, Perdue teamed up with Georgia voter Elizabeth Grace Lennon on a lawsuit filed in Fulton County, Ga. They insisted that they were not still trying to overturn former President Donald Trump’s electoral defeat, but they requested judicial relief that would effectively could have nullified the long-settled results.

Suing 16 current and former county election officials, Perdue and Lennon sought judicial declarations that they violated the Georgia Constitution’s due process and equal protection clauses. They also wanted an injunction preserving ballot materials and unsealing them for the inspection of their so-called “forensic inspector.” They also requested to replace the certified election totals with the results of their partisan review.

“This quixotic journey will not take place,” McBurney wrote in an 8-page dismissal order.

Perdue lost in Georgia to Sen. Jon Ossoff, who—together with Sen. Raphael Warnock—pulled off a stunning upset that dealt the Democratic Party control of both branches of Congress.

“The purported basis for such sweeping relief would be the Court’s declaration that Petitioners’ rights were violated, a backwards-looking declaration that no trial court may make,” the order continues. “Absent the Court’s declaration, Petitioners are left only with speculation, conjecture, and paranoia — sufficient fodder for talk shows, op ed pieces, and social media platforms, but far short of what would legally justify a court taking such action.”

After failing to attain 50 percent of vote, Perdue was forced into a runoff. His defeat became official on the day of the Jan. 6th attack on the U.S. Capitol, and the judge suggested that Perdue refused to let old wounds heal.

“Their remaining requests for equitable relief, absent the declaratory relief they cannot have, are left supported only by sour grapes which make a wine this Court will not serve,” McBurney wrote.

Even if there were support for Perdue’s claims, the judge noted, the former senator cannot seek declaratory relief for past alleged conduct.

“Here, Petitioners are asking this Court to make a declaration about something that, if it happened, already happened — i.e., a violation of their constitutional rights occasioned by Respondents’ alleged mismanagement of the Election,” the order states. “Even assuming that Petitioners could prove every allegation they have made about the Election (and they are legion) and that these allegations resulted in corresponding violations of their rights, this Court cannot issue a declaration about things that have already occurred.”

In a statement sent to Law&Crime, Perdue continued to falsely claim that the 2020 election was marred by fraud, and he characterized his latest defeat as evidence of a “cover up” by the so-called “establishment.” State and federal judges—appointed by Democrats and Republicans, including Trump—have emphatically rejected all allegations of mass voter fraud in the 2020 election. Perdue blamed these defeats on “procedural nonsense,” despite the judge’s findings on the paucity of his evidence.

“Enough with all the excuses – people deserve to know what happened and those who committed the fraud should go to jail,” Perdue wrote, falsely implying that none of the post-2020 election challenges reached findings on the merits.

Trump, his supporters and his loyalists targeted Georgia as one of the key states they fought to overturn results, whether through the courts, local U.S. Attorneys, and Republican Secretary of State Brad Raffensperger. All of those efforts have failed.

Read the dismissal order, below: