With Black and Jewish Candidates in Deep South, Dems Projected to Win Georgia and Take Senate–Putting Biden’s ‘FDR-Sized’ Promise to the Test 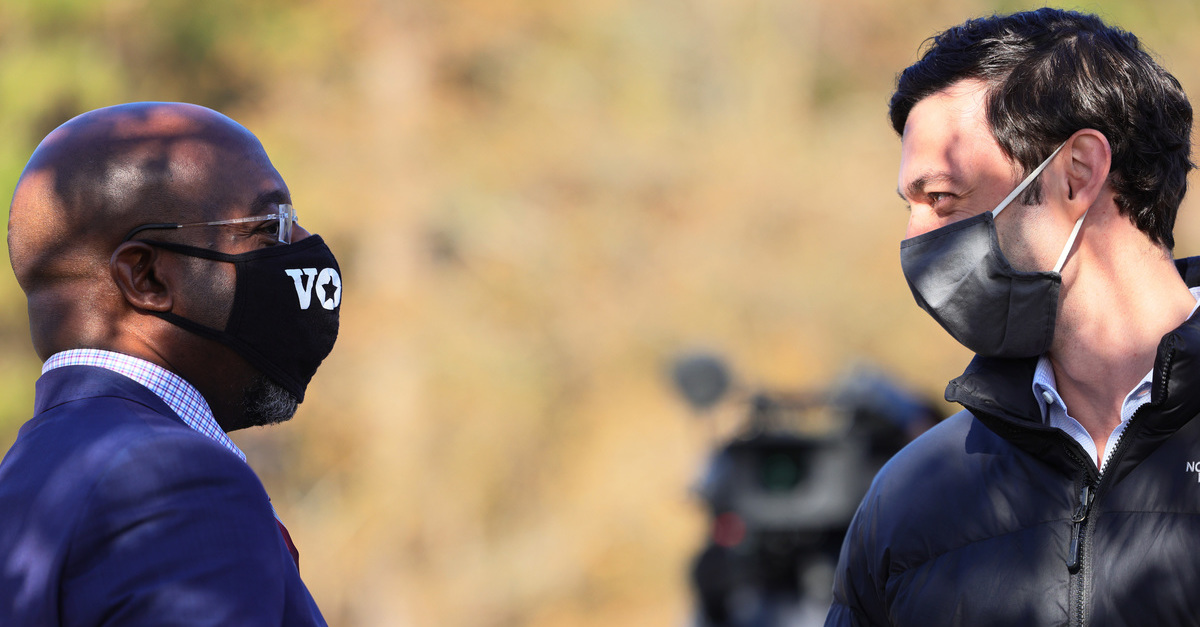 The Democratic party is projected to gain control of the Senate as of early Wednesday morning, sending Georgia’s first Black and Jewish senators to Congress and giving the incoming administration of President-elect Joe Biden a cramped but tangible space to maneuver on a giant promise.

Democrats Rev. Raphael Warnock and Jon Ossoff narrowly defeated incumbent Republican Senators Kelly Loeffler and David Perdue, who were dogged by accusations of insider trading and a party seemingly more determined to discredit the election they ran in than to win it. The Associated Press has called it for Warnock, while Decision Desk HQ and Vox similarly did so for Ossoff.

“Tonight, we proved that with hope, hard work, and the people by our side, anything is possible,” Warnock told his supporters early Wednesday morning before most news organizations officially declared his victory but after the numbers made it all but certain. In the background was a sign that said,”Thank you, Georgia.”

“The 82-year-old hands that used to pick somebody else’s cotton went to the polls and picked her youngest son to be a United States senator,” Warnock said, speaking about his mother.

The duo’s historic wins lock the Senate into a 50-50 split, which will be tipped in favor of the Democrats by another path-breaking politician: Vice President-elect Kamala Harris, the first Black woman to assume that role and the soon-to-be Senate tiebreaker.

The squeaker gives Democrats a Senate edge for the first time since 2014.

“When all the votes are counted we fully expect that Jon Ossoff will have won this election to represent Georgia in the United States Senate,” Ossoff’s campaign said as the votes trickled in to put him over the top–notching the victory that eluded him in Georgia’s most expensive House election three years ago. “The outstanding vote is squarely in parts of the state where Jon’s performance has been dominant. We look forward to seeing the process through in the coming hours and moving ahead so Jon can start fighting for all Georgians in the U.S. Senate.”

As with other elections since the time of the coronavirus pandemic, strong showings by Republicans early on were a “red mirage,” which preceded the counting of Democratic votes in largely Black metropolitan areas and counties. Warnock led Loeffler by 50.5% to 49.5% while Ossoff led Perdue by 50.1% to 49.4% at press time, but those leads might increase as the counting resumes over what could be days to come.

Biden already has promised $2,000 coronavirus relief checks with Warnock and Ossoff’s victory, and whether he will be able to deliver on his more ambitious promises remains to be seen. The former vice president and long-serving Delaware senator has said he intends to mount an “FDR-sized” presidency, at the same time that he repeatedly expresses hope to reach out to a Republican opposition intent on denying his legitimacy. Biden’s declared New Deal-style aspirations might animate the resurgent progressive wing, inspired by Franklin Delano Roosevelt‘s ambitious programs of social uplift. But any suite of legislation the Senate can narrowly pass will face a federal judiciary stacked with hundreds of Trump appointees, leaving cynics believing Biden was prescient during a fundraiser last year about his future presidency: “Nothing would fundamentally change,” he told well-heeled donors, allaying their fears about a restructuring of the U.S. economy in a remark that would long haunt his overtures to the party’s left flank.

Critics remain cautiously optimistic about what the Democrats’ victory in Georgia might bode.

“Biden can’t pass as broad an array of policies as FDR did because his margins are less,” Jeff Hauser, an attorney and the executive director of the Revolving Door Project—an offshoot of the left-wing Center for Economic and Policy Research think tank—told Law&Crime. “And some of the basics for a functioning society already exist due to FDR and a generation and a half of Democratic political dominance that crested with the Great Society.”

Hauser described what he called two assets in Biden’s corner: Legal precedent on the use of his power has given him wide room to maneuver in the realms of civil rights, clean air, antitrust, workplace safety, and other issues among his party’s priorities, and more importantly, the fact that projected-to-be Senate Minority Leader Mitch McConnell’s ability to frustrate his agenda has been “vastly degraded.”

“If Mitch obstructs effectively, Biden and Democrats in 2022 can run against a GOP Congress much like Truman’s Democrats ran against the Do Nothing Congress of 1947 and 1948,” Hauser added.

The powerful Kentucky politician proudly called himself the “Grim Reaper” for his ability to stymie Democratic legislation since he wrested control of the upper chamber from the Democrats during the second midterm election under then-president Barack Obama, who oversaw the largest loss of political power for his party since then-president Dwight D. Eisenhower in terms of governorships and state legislatures.

That power balance is once again in flux.

Up for promotions are projected-to-be Senate Majority Leader Chuck Schumer, a Democrat from New York. Democratic socialist Sen. Bernie Sanders (I-Vt.), whom Biden bested during the 2020 Democratic Party primary, will be empowered as chair of the highly instrumental Senate Budget Committee. Oregon Democratic Sen. Ron Wyden, who had multiple investigations into outgoing President Donald Trump’s family as the Senate Finance Committee’s top Democrat, is on track to chair that body.

“Reverend Warnock has shown what it means to lead with moral clarity as a pastor and community leader, and we need that more than ever right now in Washington,” Schumer said in a joint statement on Wednesday morning with Democratic Senatorial Campaign Committee Chair Catherine Cortez Masto. “Jon Ossoff has been working relentlessly to deliver more direct relief to Georgians during this pandemic and root out the political corruption blocking so much progress in Congress. Raphael and Jon have earned the trust and support of voters across Georgia in a record-breaking election, and we look forward to fighting alongside them for health, jobs and justice in the Senate.”

Others viewed the Georgia developments as a proof-positive mandate for a bold suite of progressive demands.

Brian Fallon, a former Obama and Hillary Clinton campaign alum with an ear toward establishment needs and outside left-wing pressure, is currently the executive director of Demand Justice, a left-of-center judicial advocacy group that supports wide-ranging structural changes and which previously led the fight against the confirmation of Supreme Court Justice Brett Kavanaugh.

Fallon said accepting would-be GOP filibusters was “not an option” and suggested that statehood for Washington, D.C. and Puerto Rico were all-but mandatory measures the incoming administration could not afford to move forward on.

These proposals are the ballgame, and reconciliation doesnt solve for them. Giving it the ole college try and moving on after GOP filibusters is not an option.https://t.co/Q4pTiHyydL

One procedural obstacle looms large for the incoming Democratic trifecta: the legislative filibuster.

The procedure itself is more accurately described as the Senate’s cloture rule. It is not mandatory or provided for in the U.S. Constitution or federal law. Rather, it is simply a function of Senate rules agreed upon by the majority party. It is also not a timeless paean or product of tradition; the current iteration of the Senate cloture rule was developed in 1975.

Many critics of the rule contend that the need for 60 votes to move legislation to the up-or-down vote stage sets the stage for self-hampering, self-inflicted legislative wounds and self-generated excuses. Maintaining the legislative filibuster gave Senate Republicans and conservative Democrats an outsized advantage over Obama’s own legislative agenda.

Obama himself recently advised Democrats to torch the filibuster if the GOP holds up instrumental voting rights legislation during the 117th U.S. Congress. Biden has also expressed interest in such a change.

Then-Democratic Senate majority leader Harry Reid initiated a rules change along such lines in late 2013–colloquially termed the “nuclear option“—which eliminated the Senate cloture rule on federal judicial nominees. McConnell and his Republicans took deft advantage of that new state of play when President Trump assumed office in early 2017—extending the rule to Supreme Court nominees in order to seat eventual Justice Neil Gorsuch and filling the benches of the federal judiciary at a clip unmatched in the modern era.

With the Georgia results swinging decisively in Democrats’ favor, Biden is well-situated to leave his own imprint on the makeup of the federal judiciary at a bare minimum.