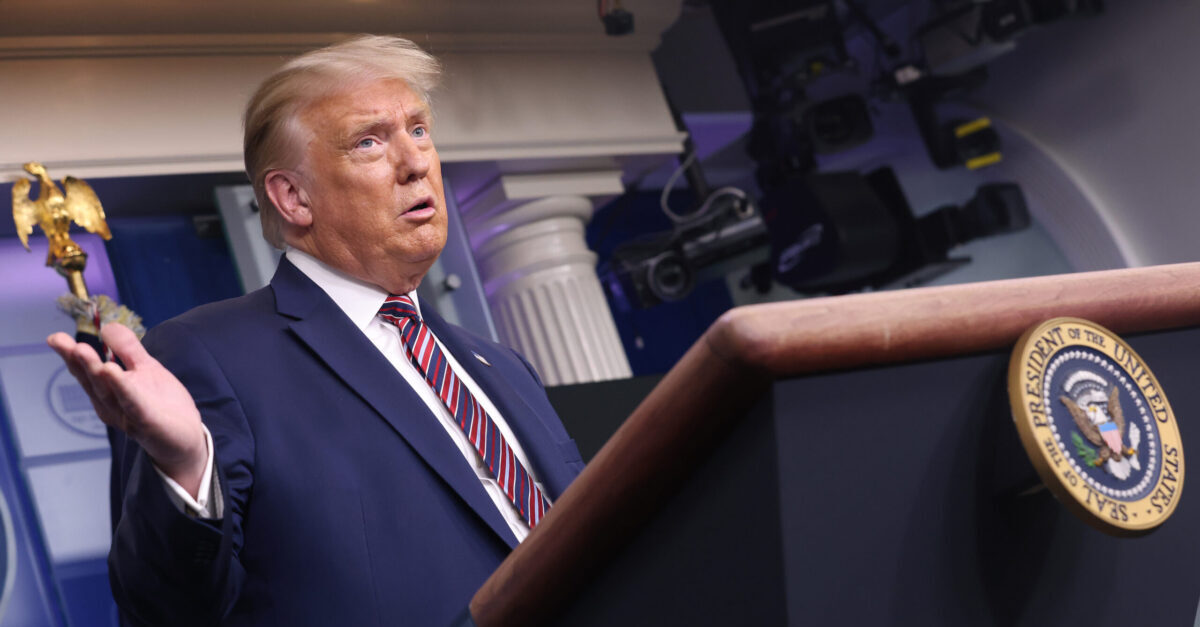 One of President Donald Trump’s numerous election lawsuits was filed in the wrong federal court. Like, the really wrong court. On Tuesday, a campaign lawyer filed a Michigan-focused federal lawsuit in the Washington, D.C.-based Court of Federal Claims–which has no authority to hear an electoral fraud themed lawsuit whatsoever.

University of Texas Law Professor Steve Vladeck noted the mishap on Twitter across a series of posts on Thursday evening.

“The Trump campaign has filed a wide-ranging lawsuit challenging the counting of votes in Wayne County (Detroit) not just in a federal district court in Michigan, but in the U.S. Court of Federal Claims in D.C. — which has *no jurisdiction* in such cases,” he said.

“To be clear, I don’t think this is malicious; it seems pretty clear it’s just a filing error,” Vladeck added. “But it says a lot to me about where we are that we’re seeing these kinds of errors.”

Here’s how the court describes itself:

The Court of Federal Claims is authorized to hear primarily money claims founded upon the Constitution, federal statutes, executive regulations, or contracts, express or implied in fact, with the United States. Many cases before the court involve tax refund suits, an area in which the court exercises concurrent jurisdiction with the United States district courts. The cases generally involve complex factual and statutory construction issues in tax law. Another aspect of the court’s jurisdiction involves government contracts.

Major areas of focus, the court notes, include “equitable jurisdiction in the area of bid protests, as well as jurisdiction in vaccine compensation.” For more information about the court, see Duke Law Professor Marin K. Levy’s lengthy thread on Twitter.

The attorney of record claims the whole ordeal was simply a mistake–and one that certainly wasn’t his.

Trust in the integrity of the Trump campaign’s legal personnel, however, is currently at an all-time low.

“Not credible—PACER doesn’t choose what court a case is filed in,” noted former federal prosecutor Renato Mariotti via Twitter. “The lawyer does.”

The Trump campaign later upped the ante by documenting the mistake in a court filing that pawned off responsibility of the federal court system’s information technology.

The Trump campaign’s lawyers have escalated the situation—from telling a CNN reporter an implausible tale to repeating it in a court filing. pic.twitter.com/XJFFhn5kdb

“Plaintiffs represented by Thor Hearne and True North Law, LLC filed a complaint in the United States District Court for the Western District of Michigan,” the filing notes–a case previously reported on by Law&Crime. “As a result of an electronic error in the PACER filing system this matter was also filed in this court. We understand that this filing error in the electronic filing system is not uncommon.”

This filing only made things worse. After that, #AppellateTwitter sprang into action.

“ECF doesn’t work that way,” National Security Counselors Executive Director Kel McClanahan said via Twitter–referring to the federal Judiciary’s Case Management/Electronic Case Files (CM/ECF) system which allows case documents to be filed online. PACER is the system that allows the public to access files submitted via the CM/ECF. For more information on how these systems communicate with one another see here.

“The systems don’t even talk to each other,” McClanahan continued. “I couldn’t accidentally file something in the W.D. Mich. any more than I could accidentally file it in Australia. What is not beyond possibility is a stupid lawyer who is barred in two courts clicking on the wrong ECF bookmark by mistake [and] not realizing it until later. That might not be uncommon in the legal circles in which Trump’s lawyers travel.”

Ukraine whistleblower attorney Mark Zaid also disagreed that the technology itself was the problem here.

“I have been involved in 100+ federal lawsuits since electronic filing became a thing,” he tweeted–noting that he’s worked in multiple federal courts across the country including the Federal Court of Claims. “I have NEVER experienced such an occurrence, nor have I ever even heard of it happening.”

“I have never heard of this happening,” he said via Twitter. “And we file lots of complaints all around the country. You really can’t do this by accident. It takes a lot of actions to file a complaint on ECF.

University of Washington Law Professor David Ziff attempted a plausible off-ramp but Samberg-Champion wasn’t having it:

The evidence kept mounting against the Trump campaign lawyer.

UCLA Law Professor Sean Hecht pointed out that there are actually two separate login portals for the Western District of Michigan District Court and the Court of Federal Claims:

Hard to see how this could possibly happen. 2 different logins. 2 different websites within the PACER/ECF system. pic.twitter.com/D1NsgYfXLi

Attorney Paul Rosenzweig adamantly insisted that Hearne was lying due to the technological distinction between the two systems:

Given that the systems are logically and digitally separate for each distinct jurisdiction the answer is “never.” This is a lie. It was clearly an error of filing. Accidents happen. I once filed an appeal brief in the wrong case. Ate crow, apologized and moved on.

Oddly enough, despite the snafu, mistake or subterfuge, Hearne might actually be considered something of an expert on the Court of Federal Claims itself–if not the Judiciary’s digital inner workings.

That’s because he sits on the board of the Court of Federal Claims’ Advisory Council Committee with a focus on takings and tribal claims.

Law&Crime reached out to Hearne for comment on this story but no response was forthcoming at the time of publication.