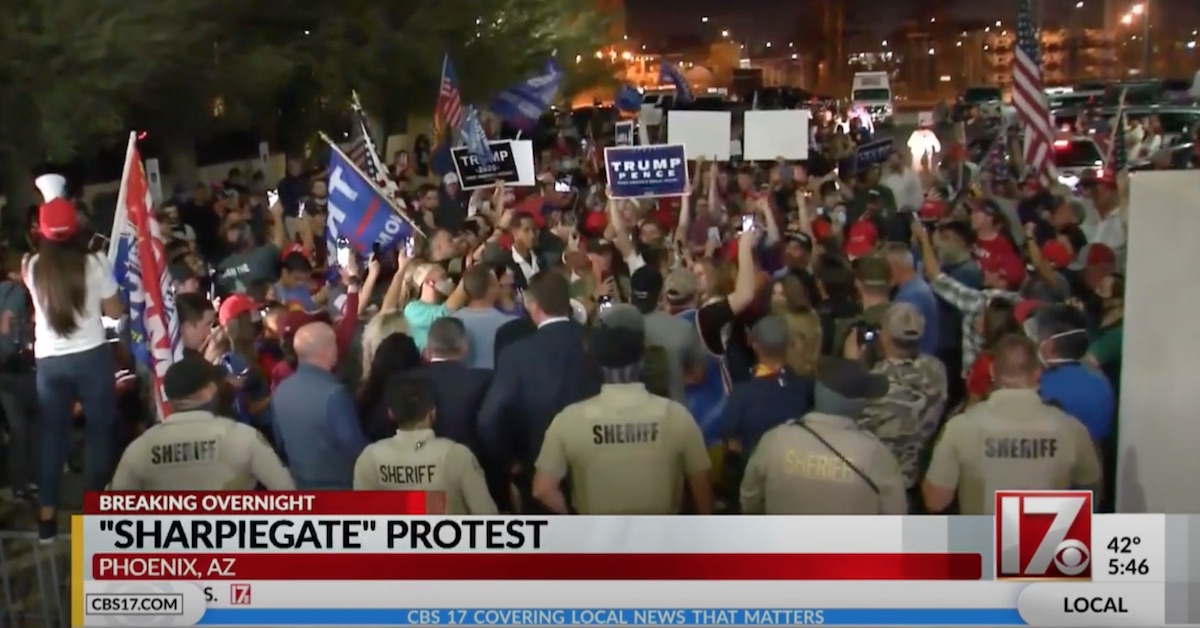 A Trump campaign attorney conceded in court on Thursday morning that he tried to enter hundreds of dodgy form-filed affidavits into evidence, even though their own investigation found that a subset of the sworn statements that they received were filled with lies and “spam.”

“This is concerning,” Judge Daniel Kiley, from Arizona’s Maricopa County, remarked with some understatement.

“How is that a reliable process of gathering evidence?” the judge asked, later blocking admission of the so-called evidence.

Put on the spot by the judge was the Trump campaign’s lawyer Kory Langhofer, who explained the automated process that reflected their post-election evidence hunt. It included an online form whose reliability Langhofer claimed was boosted by the fact that it included a CAPTCHA, which weeded out the bots. The attorneys then visited the complainants’ homes. The Trump campaign said it excluded the submissions of those who swore to lies, but they included the ones they could not prove were lying into evidence.

Judge Kiley replied that this did not show the remaining affidavits are trustworthy.

Shortly after, Langhofer went sharply off-message with Trump representatives telling any media outlet that would listen about their vast voter-fraud conspiracy theory.

“This is not a fraud case,” Langhofer said, casting the lawsuit instead as allegations of flaws within the voting system. “It is not a stealing-the-election case.”

That marked the second time in as many days that attorneys for the Trump campaign disavowed in court what the president and his loyalists alleged in print, tweets and on the public airwaves. On Wednesday, it was the campaign’s Porter Wright attorney Jonathan Goldstein who refused to allege fraud when pressed by a Pennsylvania judge.

“Your honor, accusing people of fraud is a pretty big step,” Goldstein said in Montgomery County Court of Common Pleas. “And it is rare that I call somebody a liar, and I am not calling the Board of the DNC or anybody else involved in this a liar. Everybody is coming to this with good faith.”

Over in Arizona the next day, a Maricopa lawyer played on a Trump slogan to discredit the president’s conspiracy theories. What happened in Arizona was a success story, the attorney said: “Made Maricopa County Elections Great Again.”

The Trump campaign’s admission came toward the beginning of a daylong evidentiary hearing in a case that began as the so-called “Sharpiegate” lawsuit, the outlandish speculation that election workers handed markers to Trump voters to invalidate their votes on Election Day. The hearing is expected to last for five hours.

Due to technical errors with the court’s public access phone line, proceedings went into recess for a few hours before reconvening at 12:30 p.m. Mountain Time. The judge attributed the problem’s with the system to an “external” influence, before witness testimony resumed with Maricopa County’s Director of Election Day and Emergency Voting Scott Jarrett.

Splashing more cold water on the “Sharpiegate” brouhaha, Jarrett explained that markers bleeding through a ballot did not lead to overvotes, the term for when a voter casts a ballot for more than the maximum allowable number of candidates. Jarret testified that this happened in the 2020 election mostly with 19 candidates for judges, not presidential candidates, and Arizona Attorney General Mark Brnovich (R) found no evidence of voter disenfranchisement.

After an evidentiary shellacking on the issue, even Langhofer abandoned the Sharpie issue. He objected to cross-examination of witnesses about the issue on grounds of relevance, saying that issue would not figure during his closing arguments. Judge Kiley overruled that objection: The questions were relevant because the witnesses spoke about the issue in their affidavits, and the Trump campaign detailed it in their lawsuit.

The Trump campaign’s parade of witnesses hardly bolstered their case.

When pressed by the Arizona Democratic Party’s counsel Daniel Arellano, each of the witnesses in turn conceded they did not know whether their vote was counted.

“Do you have any basis to believe your vote wasn’t counted?” Arellano asked voter Mia Barcello.

“Uh, I’m not sure,” Barcello replied with a laugh.

When pressed about it further, Barcello replied: “No.”

Ms. Barcello had plenty of company, with another witness responding “I couldn’t say” to the same inquiry and another replying “That’s correct” when asked if he did not know one way or another whether his vote was counted, a matter that could have been quickly settled by consulting the public record.

“I don’t know whether they were counted or not,” Swoboda said, adding that she could speak to voters’ “beliefs” but otherwise had “no way of knowing” whether or not that was true.

Testimony by the Trump campaign’s expert witness took a turn to the absurd when Zack Alcyone, whose business bio boasts of his experience in “ballot access calculations,” conceded that he is the business partner of Langhofer, the lawyer who argued the president’s case all day. The website of the Phoenix-based software company Signafide lists them as co-founders.

Sarah Gonski, another lawyer for the Arizona Democratic Party, marveled at the changing theories advanced by the Republicans.

“Your honor, it’s not exactly clear what they’re asking for because it’s been a moving target,” Gonski noted, pointing theories about Sharpies, overvotes and a green button.

The voice of Maricopa County’s lawyer Thomas Liddy swelled with indignation as he reflected upon how Arizona Republicans’ claim of “Stop the steal!” whittled down to small-bore complaints about less than 200 ballots that ultimately got counted.

“The ballots are as the ballots are, voted by the voters,” he said later, adding that changing the process at this late stage would amount to “overriding voters’ intent.”

Some six hours later, with passions riding high and an anxious nation awaiting a decision, Judge Kiley adjourned the proceedings and took the matter “under advisement.” He did not commit to a date to deliver a written ruling.