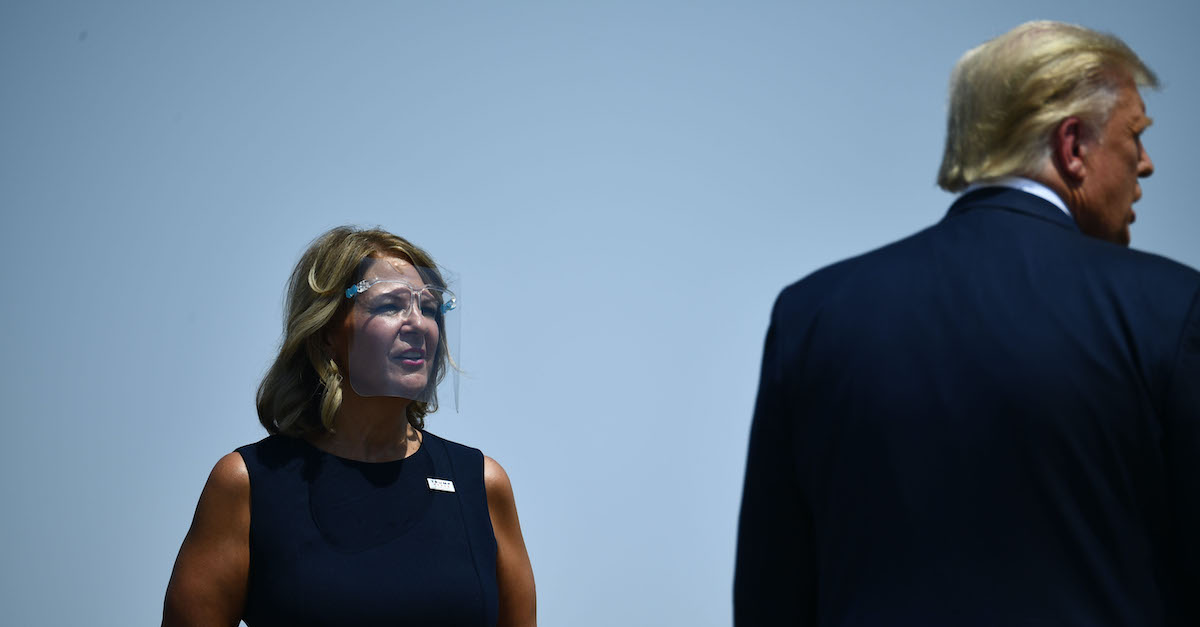 US President Donald Trump (R) is greeted by the Chairwoman of the Arizona Republican Party Kelli Ward as he arrives to deliver remarks on immigration and border security at the international airport in Yuma, Arizona on August 18, 2020.

The Arizona Republican Party could face court sanctions for filing a lawsuit even though the state’s audit debunked its allegations, a judge suggested in a ruling tossing the case.

“What exactly the Arizona Republican Party and its attorney knew or had reason to know about the status of hand count audit, at the time of filing the complaint, will be an issue on the application for attorneys’ fees,” Maricopa County Superior Court Judge John R. Hannah, Jr. wrote in a footnote of a 13-page ruling on Monday.

“The Republican Party appears to have had constructive knowledge, at least, of facts that contradicted the allegations in the complaint,” he added.

The Arizona GOP’s chairwoman Kelli Ward fought and lost multiple lawsuits trying to topple President-elect Joe Biden‘s victory in her state, before appearing to lose faith in democracy as a form of government in a tweet urging outgoing President Donald Trump to “cross the Rubicon.”

Entering the lexicon as a point of no return, the phrase comes from Julius Caesar’s action that brought the end of the Roman Republic and turned himself into an all-powerful emperor. Ward’s proclamation has been widely condemned as pining for dictatorship, and it was shared by disgraced General Michael Flynn, who has goaded Trump to declare martial law.

The Arizona Republican Party itself lost the latest round of litigation, in which the presiding judge emphasized in all italics: “The hand counts verified that the machines had counted the votes flawlessly.”

Like Trump, the state GOP refused to graciously accept defeat.

“The plaintiff baldly asserted that this relief was necessary to maintain ‘confidence in the integrity of our elections,’ without alleging any facts to show that the machines might have miscounted the votes. The plaintiff could not explain why the suit had not been filed before the election, or what purpose another audit would serve.

“This order explains why the Arizona Republican Party’s case was meritless, and the dismissal order filed November 19, 2020 was required, under applicable Arizona law. What remains is intervenor Arizona Secretary of State’s application for an award of attorneys’ fees. That application will require the Court to decide whether the Republican Party and its attorneys brought the case in bad faith to delay certification of the election or to cast false shadows on the election’s legitimacy.”

In her application for attorneys’ fees, Arizona Secretary of State Katie Hobbs’s attorney Roopali Desai argued for that the state’s Republican party should be punished for their litigation tactics.

“They brought a meritless claim, prosecuted it in truly amateurish fashion by failing to seek necessary relief and half-heartedly seeking to enjoin Maricopa County’s canvass, and thought so strongly of their claim that they didn’t appeal when it was dismissed with prejudice,” the 11-page application states. “Their motives were transparent: delay final election results and sow doubt about the integrity of Arizona’s elections system.”

“That’s simply not what litigation is for, and this abuse of the judicial system should not go without sanction,” it continues.

The Arizona GOP’s attorney Jack Wilenchik did not immediately respond to an email requesting comment.