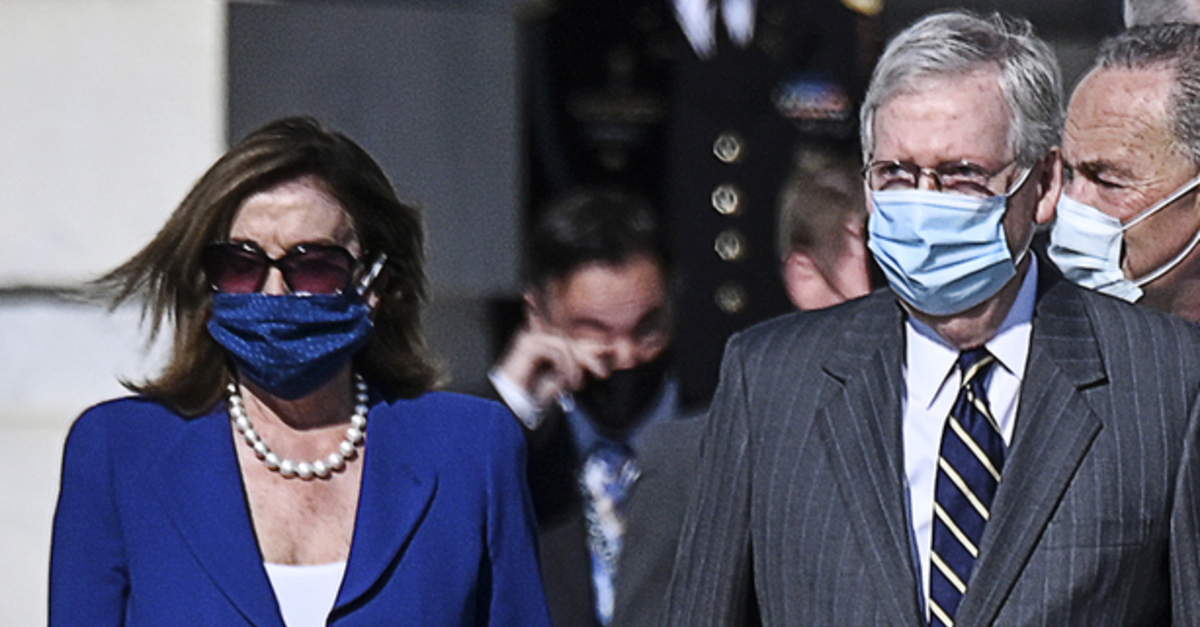 Congress passed the “Consolidated Appropriations Act, 2021’’ $900+ billion stimulus package on Monday. The new law will mean financial assistance for individuals, families, and businesses, and is meant to target some of the disastrous financial effects of the pandemic.

It’s got some help for families struggling financially as a result of the pandemic. For example, it’s giving $600 per person plus $600 per child. Suffice it to say, though,  the bill was not exactly narrowly-tailored to assisting families get through the pandemic. Here are five weird results of American taxpayer dollars at work.

Until now, businesses have only been able to deduct 50-percent of meal expenses on their federal tax returns. Under this change, for which President Donald Trump advocated as a way to help business, business meals will be deductible from soup to nuts. The bill awaits Trump’s signature.

While some are celebrating the move, others seem less than convinced.

Me: [blowing my $600 stimulus check on a really nice three-martini lunch]

Let me get this straight: Senate Republicans fought tooth and nail to ensure struggling Americans got as little help as possible, but demanded a “three-martini lunch” tax deduction for corporate meal expenses?

We really need to win those Senate seats in Georgia.

And still others have practical questions:

2. Funding for three new museums: The Smithsonian American Women’s History Museum, the National Museum of the American Latino, and the Coast Guard Museum.

Update: Congress voted to authorize the creation of the Smithsonian National Museum of the American Latino and the Women’s History Museum late Monday night.https://t.co/XN7ZeQDWk1 pic.twitter.com/SIqz0xEX9K

Efforts to secure funding for the museums have been in place for quite a while, those behind them are celebrating the long-awaited wins.

Building a Smithsonian Women’s History Museum, a testament to the women who helped build and shape this nation, has been years in the making, and I am thrilled that we are finally set to pass this historic legislation.

There IS going to be a SMITHSONIAN WOMEN’S HISTORY MUSEUM on the national mall!!!

And yet another win for CT in the budget/COVID relief bill:

$5 million more of federal funding (for a total of $20m total) to plan and build the Coast Guard Museum in New London. The museum is going to be an economic generator for decades for SE CT.

Others, though, believe funding museums misses the mark during a global pandemic.

What does a Coast Guard Museum in New London, have to do with relief?

An effing museum for the Coast Guard while people are on the verge of being evicted?

Thank goodness that Congress was able to find $20 million this year for the National Museum of the America Latino. With so many Latinos infected/dying with COVID, it’s good to know that their legacy will live on.</sarcasm>

Is there lead in the Congressional water pipes? pic.twitter.com/ld8SgrF9iQ

Latinos are dying from COVID at a tremendous clip in this country. Over 70% of ICU admissions in L.A. are Hispanic. Was a museum really what they needed at this moment?

In a subsection labeled the “Horseracing Integrity and Safety Act of 2020,” the bill creates a committee to regulate the use of performance-enhancing drugs in horse racing.

Tonight, the U.S. House took the final step in passing legislation I have authored and advocated for the last six years, the Horseracing Integrity and Safety Act.

Kentucky Congressman Andy Barr (R) sponsored the measure, and said that its passage “means we are in the final stretch of achieving the most transformational and consequential reform of the thoroughbred horseracing industry since enactment of the Interstate Horseracing Act of 1978.”

That means we are in the final stretch of achieving the most transformational and consequential reform of the thoroughbred horseracing industry since enactment of the Interstate Horseracing Act of 1978.

Predictably, there were those who felt that horse racing regulations just wasn’t the change we needed right now.

So if one of the horses die, does it count as Covid related?

So now Americans are less valuable than horses and statues. Got it.

How does that saying go? I don’t have a fuck left to give?

The bill makes several changes to copyright law, including one measure aimed at protecting the intellectual property rights of artists and entertainment companies.  Under the law, illegal streaming for commercial profit is a felony.

Although the entertainment industry has been hit hard by the pandemic, many have pointed out the rather tenuous relationship between this measure and meaningful COVID-19 relief.

Which of course has nothing to do with Covid and is a terrible law….but heads up to all you illegal streamers and password sharers

they give you scraps like $600 but they’ll bend over backwards to include things to appease the hollywood overlords. tf does this have to do with covid

5. Warns China against interfering in the naming of the next Dalai Lama.

Somehow the Dalai Lama made it into the coronavirus relief bill… pic.twitter.com/SushFS8Cnq

Under the bill, “interference by the Government of the People’s Republic of China or any other government in the process of recognizing a successor or reincarnation of the 14th Dalai Lama and any future Dalai Lamas would represent a clear abuse of the right to religious freedom of Tibetan Buddhists and the Tibetan people.”

Many were not amused.

More nonsense in the “COVID relief” bill… “STATEMENT OF POLICY REGARDING THE SUCCESSION OR REINCARNATION OF THE DALAI LAMA.”

Hey @SpeakerPelosi and @senatemajldr, you know Americans are literate enough to read this hunk of garbage, right? pic.twitter.com/Srj8qpu2ul

There was, however, at least one decent suggestion about how this might relate to pandemic relief:

People, *obviously* Congress put the Dalai Lama in the stimulus bill so the $600 checks would reincarnate.

The above list is by no means exhaustive. We invite you to look over the thousands of pages of legislation and find your own hidden gems. The bill can be accessed in its entirety here.