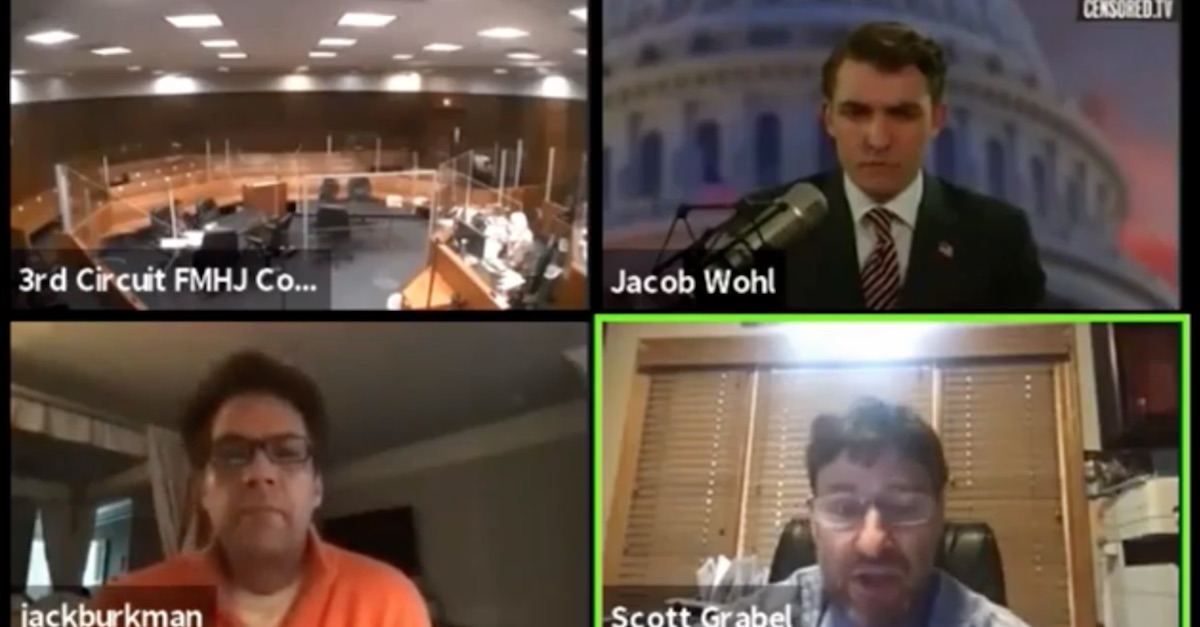 To hear Jack Burkman’s criminal defense lawyer tell it, Harvard Law professor emeritus Alan Dershowitz has been busy “working for” President Donald Trump’s on “election fraud” issues and may, therefore, be too busy to serve as an expert witness in the Jacob Wohl-Burkman criminal robocall case in Michigan. But Dershowitz told Law&Crime that he’s not consulting on the Wohl-Burkman matter and isn’t working for Trump.

The apparent discrepancy between these two statements was learned after a Monday virtual courtroom hearing in the Wohl-Burkman case, a hearing that was first flagged by Daily Dot reporter Zachary Petrizzo. As you may know, Wohl and Burkman have attempted to fend off both civil and criminal liability related to robocalls that targeted minority voters ahead of the 2020 election. Michigan authorities hit the right-wing operatives with several voter intimidation felony charges.

On Monday, Attorney Scott Grabel told Third Judicial Circuit Court Judge Margaret Van Houten that he “consulted” with Dershowitz on the case. Grabel, styling the Wohl-Burkman case as novel, said he was interested in getting Dershowitz to be an expert witness.

While doing so, Grabel claimed that Dershowitz was busy “working for” President Trump “on this election fraud situation.”

“I have consulted with two experts that would probably be — one would be in the top three of constitutional law in the United States. I just want to see if he is available,” Grabel said. “I could get something in writing from him, but the court may want to ask questions and I think as I said it is a very unusual case.”

Who was Grabel talking about?

“He hasn’t been retained. I’ve consulted with him, he’s working for the president right now on this election fraud situation,” Grabel began to give listeners a clue of the this individual’s identity. “He teaches at Harvard Law School, that’s who I’ve consulted with, Alan Dershowitz, but again I have to get him to respond to see if he is going to do it.”

“He’s the one who reviewed my materials,” Grabel said. “He has not been retained at this particular time, your honor. He may not want to offer testimony because of scheduling. So, that’s who I’ve spoke to via email.”

Law&Crime spoke with Dershowitz via email this afternoon and asked him two questions.

The first was whether there was any truth to Grabel’s claim that Dershowitz is consulting on the Wohl-Burkman criminal case and whether he may serve as an expert witness for the defense.

“I am not involved in that case,” Dershowitz answered.

The second question was whether it was true that Dershowitz was involved in President Trump’s election lawsuits.

“I am not,” Dershowitz replied.

Is it is simple as that or is this an answer reminiscent of something Dershowitz said when asked about joining the president’s impeachment team?

Law&Crime reached out to Grabel separately for some clarification and he said that he believed the court hearing record was clear on the “consulting” issue.

“Concerning my ‘consulting’ with Mr. Dershowitz the record this morning stands on its face in reference to that issue. At this point I don’t have anyone retained as an expert as I stated this morning on the record,” he said.  “I look forward to presenting my legal challenges to these charges on behalf of Mr. Burkman and fully expect this matter to dismissed in its entirety in the near future. Stay tuned.”

As for the Trump lawsuits?

Editor’s note: the headline was updated to accurately reflect that Grabel is representing Burkman in the Burkman-Wohl criminal case. William Amadeo is representing Wohl.