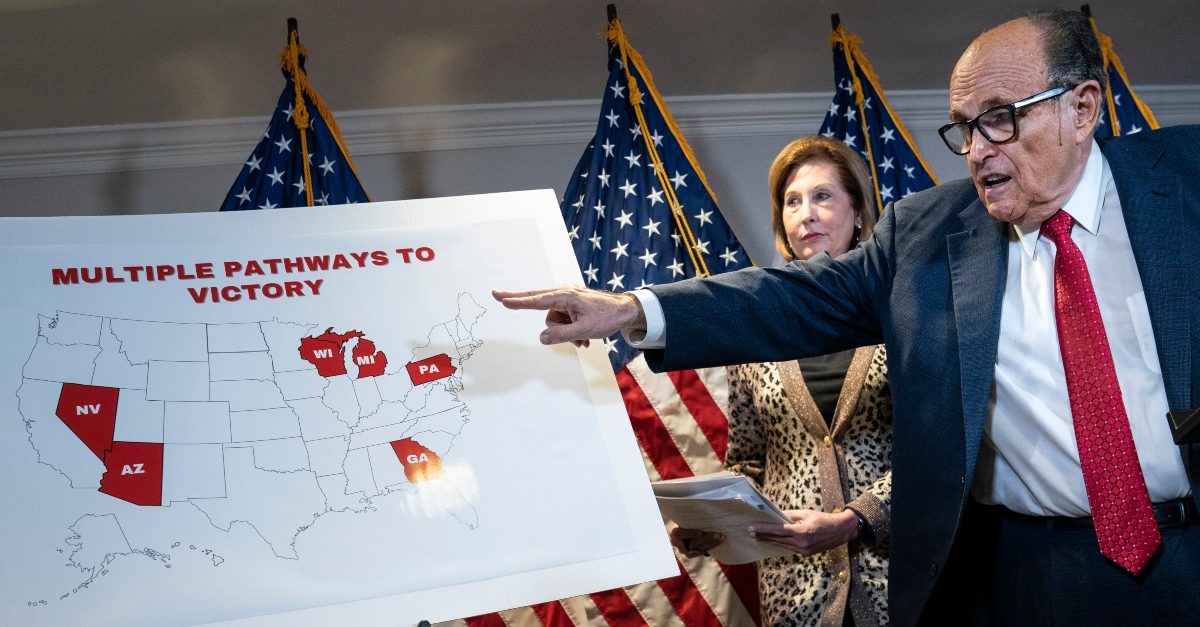 In the wake of last month’s presidential election, the campaign and allies of President Donald J. Trump have filed several dozen lawsuits, alleging unsubstantiated widespread irregularities and fraud. In the ensuing weeks, the lawsuits have been widely ridiculed. Two Republican lawyers for George W. Bush in his winning legal fight in Florida during the 2000 presidential election even characterized them as “entirely without merit” and “completely unsubstantiated.”

Except for a couple of minor wins, Trump’s lawyers have repeatedly been turned back in their legal claims, sometimes chided by federal and state judges for their mistakes and misstatements. Are such lawsuits legal? And could they lead to disciplinary action against Trump-allied lawyers for violating applicable rules of professional conduct?

Lawyers are officers of the court and must follow certain court rules when they file lawsuits. If a lawyer violates these rules, the client’s lawsuit can be dismissed, and the court may sanction the lawyer or client. Also, in distinct proceedings, a lawyer can be disciplined if she violates a jurisdiction’s ethics rules relating to the filing of those lawsuits.

While court procedures and lawyer ethics rules in each jurisdiction vary, all prohibit lawyers from filing lawsuits that are “frivolous” or “lack merit.” But lawyers are permitted to file lawsuits where they know enough facts to believe that the eventual proof will support the allegations of the complaint, without knowing all the facts at the time the lawsuit is filed.

A lawyer is also required to cite a settled legal theory or state a new one that the lawyer believes should be accepted by the court. Examples of “new legal theories” accepted by the U.S. Supreme Court include the school segregation argument that led to the landmark Brown v. Board of Education decision in 1954, which was made by civil rights lawyer Thurgood Marshall, and the same-sex marriage argument that led to the Obergefell decision in 2015.

Lawsuits are governed by Rule 11 of the Federal Rules of Civil Procedure, which most state judicial systems have adopted in some form. This rule requires that, to the best of the lawyer’s knowledge, the legal theory is “warranted by existing law or by a nonfrivolous argument … or the establishment of new law.”

In short, if a lawyer files a complaint based on a legal theory so far-fetched that no court could be expected to accept it, then she could have violated Rule 11 or its state equivalent and be subject to sanctions as provided for in the rule. She could also be sanctioned by the lawyer regulators in her state for violating ethics rules in place in virtually every jurisdiction based on American Bar Association Model Rules of Professional Conduct, including Model Rule 3.1, and face discipline ranging up to disbarment.

In the case of the Trump-related suits, each filing sought emergency relief and court rulings within a few days, which meant that the duty of lawyers to find and present supporting facts was accelerated by their own need for a quick court decision. Still, nearly every suit was rejected.

As examples, on Nov. 27, a three-judge panel of the U.S. Court of Appeals for the Third Circuit dismissed a Pennsylvania suit, with U.S. District Judge Stephanos Bibas, a Trump appointee, writing, “charges require specific allegations and then proof. We have neither here.” In Michigan, on Nov. 12 Chief Judge Timothy M. Kenny of Wayne County Circuit Court denied the petition from the pro-Trump side, noting, “plaintiffs’ interpretation of events is incorrect and not credible.” And in Georgia on Nov. 20, U.S. District Court Judge Steven Grimberg, also a Trump appointee, dismissed a lawsuit from attorney Lin Wood, a Trump ally, saying there was “no basis in fact and law.”

Legal experts say a fine line separates a “frivolous” suit from one that might be “meritless” but advocates a new legal theory. So far, state and federal judges, many of whom have harshly criticized claims by Trump-allied lawyers, have yet to sanction the lawyers under state judicial rules or federal Rule 11. The standard is high for imposing such sanctions.

In Detroit last month, city lawyers filed a complaint asking a federal judge to sanction the Trump campaign for spreading “disinformation” in one of the cases. Also, complaints have been filed with at least five state disciplinary agencies – in Arizona, Michigan, Nevada, New York and Pennsylvania – accusing as many as 23 different attorneys of either filing “frivolous” lawsuits or engaging in other professional misconduct.

Whether these lawyers violated applicable rules of professional conduct will be determined via state disciplinary proceedings conducted by the respective lawyer disciplinary agencies. The standard of proof in most jurisdictions for finding such violations is clear and convincing evidence. As a matter of course, each disciplinary agency would review these matters on a case-by-case basis.