The Georgia Kraken, when arguing on Friday that the Eleventh Circuit has jurisdiction to hear its appeal, said Dominion Voting Systems rigged the election against Joe Biden. The assertion can be found in the first paragraph of Sidney Powell and Lin Wood’s background presentation of their case. 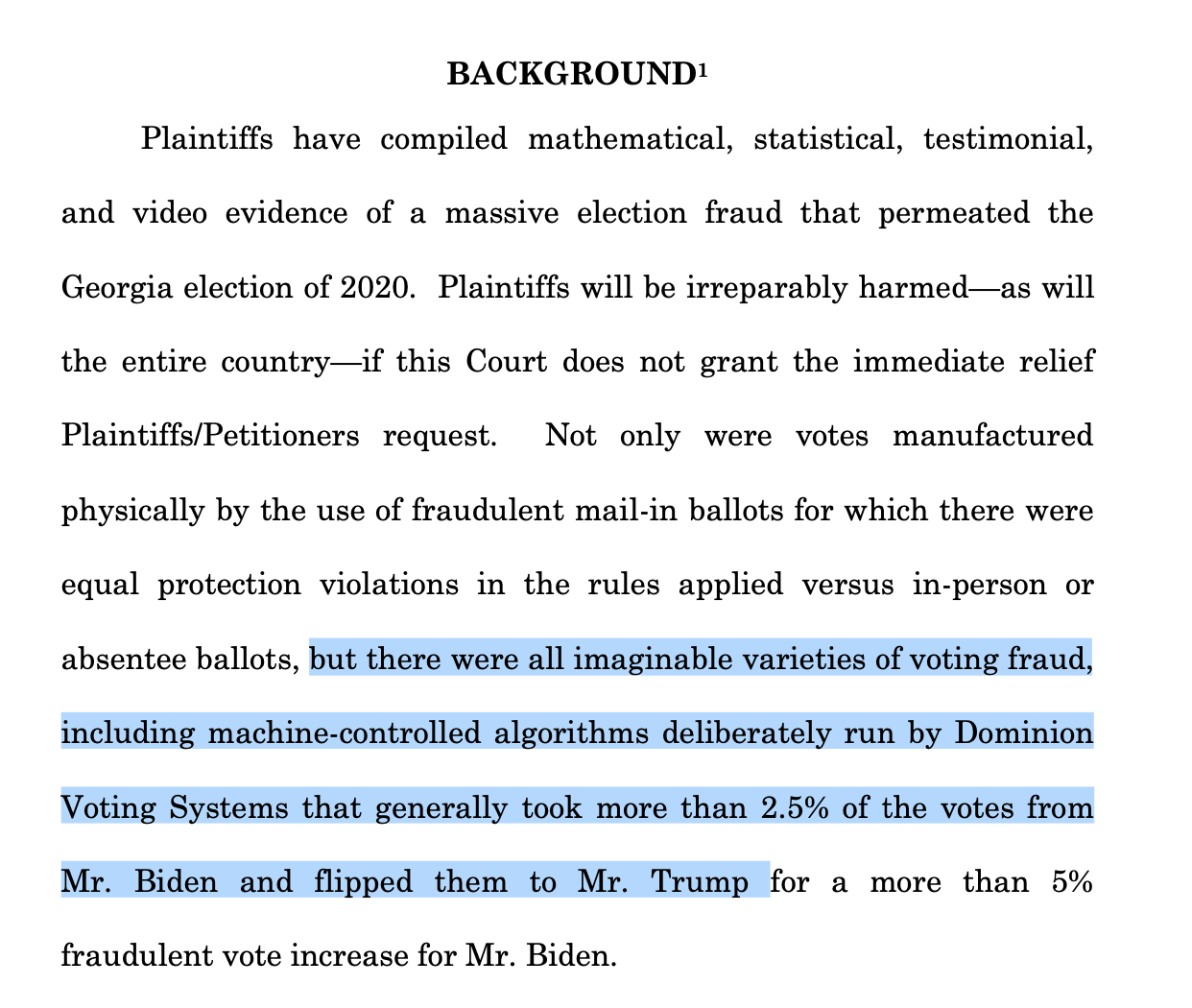 “[T]here were all imaginable varieties of voting fraud,” appellants said, “including machine-controlled algorithms deliberately run by Dominion Voting Systems that generally took more than 2.5% of the votes from Mr. Biden and flipped them to Mr. Trump for a more than 5% fraudulent increase for Mr. Biden.”

To be clear, this line says that Dominion took votes from Biden and gave them to Trump—to increase Biden’s vote. That’s an … interesting theory and “epic fail.”

Powell, Wood and their co-counsel submitted a brief with the U.S. Court of Appeals for the Eleventh Circuit at 11:58 p.m. on Wednesday, asking the court to issue a temporary injunctive order to decertify the presidential election, and order Republican Georgia defendants Gov. Brian Kemp and Secretary of State Brad Raffensperger to “preserve all data on the Dominion System” so “Republican Electors can audit the Dominion System” in 10 counties.

It’s not clear that the Eleventh Circuit has jurisdiction to hear the appeal, hence the Friday filing in response to jurisdictional questions. Appellants acknowledged that “appellate jurisdiction does not ordinarily exist on an order granting or denying temporary injunctive relief,” but they maintain that this is not an ordinary situation. 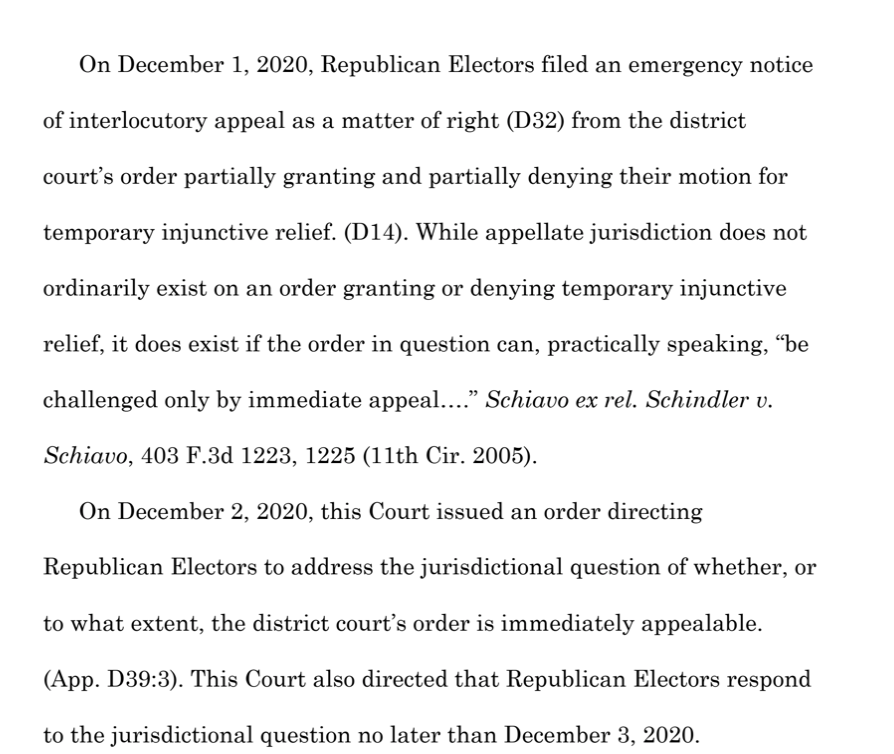 Powell et al. said that the appellate court has jurisdiction to hear the appeal of an order from U.S. District Judge Timothy Batten Sr., whose temporary restraining order said that voting machines should remain untouched in Cobb, Gwinnett, and Cherokee Counties.

“[Defendants are] ENJOINED and RESTRAINED from altering, destroying, or erasing, or allowing the alteration, destruction, or erasure of, any software or data on any Dominion voting machine in Cobb, Gwinnett, and Cherokee Counties,” the judge said.

Appellants now demand an opportunity to perform a forensic analysis in the name of ” every freedom-loving world citizen” on machines in 10 counties:

Appellants, the people of Georgia and, indeed, the people of the United States, and every freedom-loving world citizen will be irreparably harmed if Appellees are allowed to alter the voting machines to rig elections in this country and make forensic analysis of the voting process impossible. Under Schiavo and Ingram this is all Appellants need show to establish that this Court has jurisdiction over their appeal pursuant to § 1292(a)(1).

They argued that “If the machines were not tampered with,” Republican officials have “nothing to fear.” 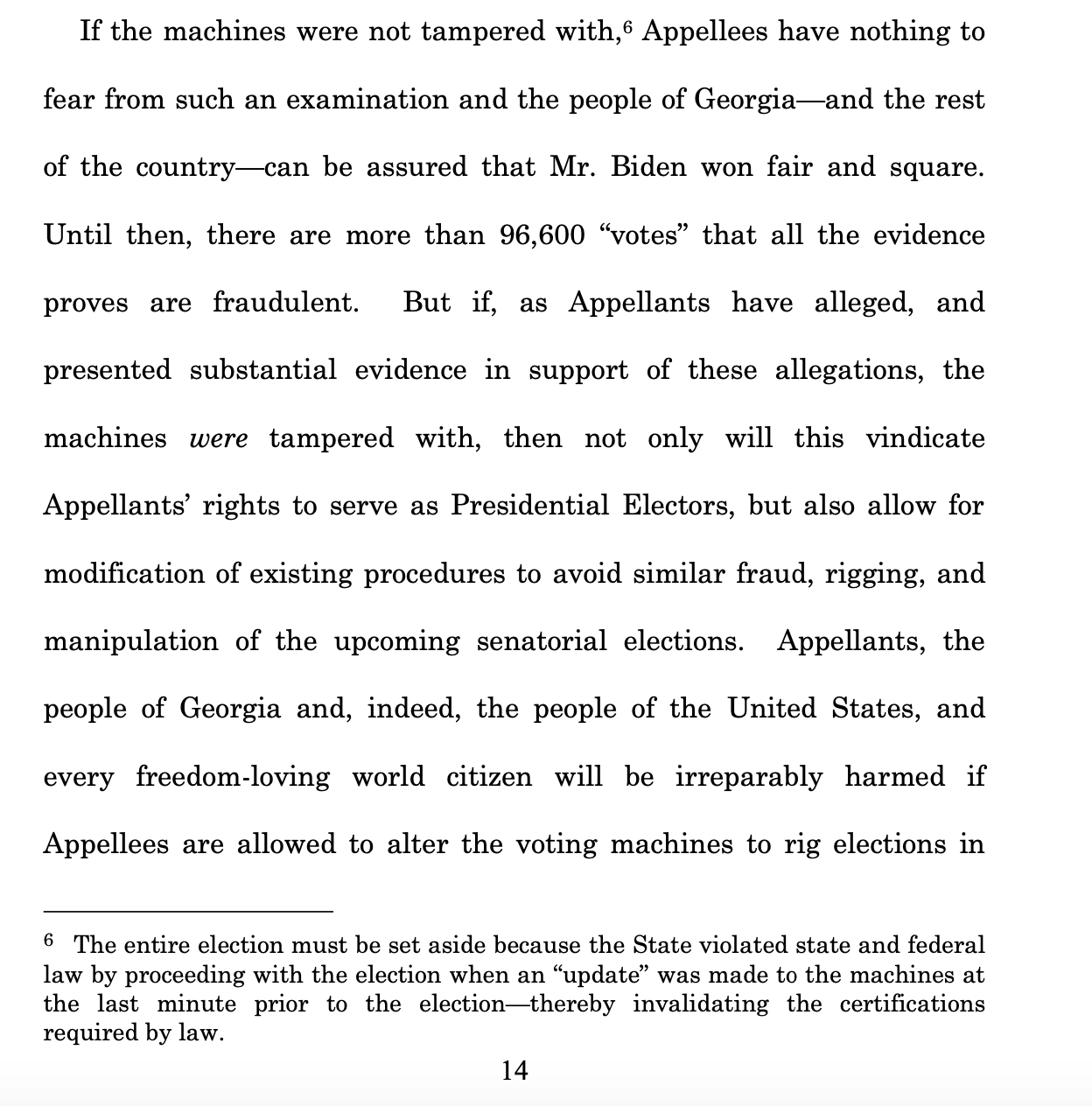 But Kemp and Raffensperger countered at the district court on Thursday, saying that Powell and Wood’s lawsuit is jeopardizing election officials’ preparation for the U.S. Senate runoff elections (which Republicans desperately need to win). Powell and Wood bizarrely told a MAGA-hatted crowd at a “Stop the Steal” rally on Wednesday that Georgians shouldn’t vote in the runoffs because they can’t trust the election will be secure. This has turned into a serious problem for the Republican National Committee.

Kemp and Raffensperger have asked Judge Batten to “dissolve the November 29, 2020 Temporary Restraining Order entered by the Court” or else the “ability of local county officials to efficiently and securely conduct the upcoming January 5, 2021 Run-Off Elections will be significantly inhibited”:

With this Motion, the State seeks to amend Paragraph Two so that counties may proceed with Logic and Accuracy testing needed to prepare the machines for early, in-person and election-day voting as required by State law.2 Without some modification, non-party Cobb County’s ability to prepare for the January 5, 2021 Run-off Election will be significantly hindered if not practically precluded altogether, while voters in Gwinnett County could be deprived of the same rights to early voting as voters in other Georgia counties. Cobb and Gwinnett voters may also be subject to long lines due to an insufficient number of voting machines. There is no reason for these outcomes and, consequently, the State respectfully requests that this Court dissolve the TRO or otherwise modify Paragraph Two of the Order to permit Cobb and Gwinnett County machines to be used in the rapidly approaching Run-off Election.

Attorney General Bill Barr said earlier this week that federal agencies have looked into claims that voting machines were rigged to manipulate the election results. Barr said he has not seen evidence of that, sparking outrage among Trump’s supporters.

Georgia’s Republican election officials have said that the rhetoric of the president and his allies in their relentless campaign to sow doubt about the election results has “gone too far.”

"It has all gone too far." Georgia election official @GabrielSterling just called on Donald Trump to condemn threats against election workers: "This has to stop. We need you to step up—and if you're going to take a position of leadership, show some." pic.twitter.com/jQ4ZC0A14M