WATCH: Steven Avery’s Son is Unsure His Father is Innocent 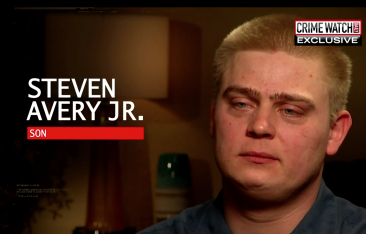 Steven Avery’s twin sons, briefly mentioned in the controversial Netflix documentary series Making a Murderer, are speaking out for the first time in an exclusive interview airing Monday afternoon on Crime Watch Daily.

The twins, Bill Avery and Steven Avery, Jr., do not recall whether they were asked to play a larger role in the documentary, but they do remember most of their family members wanted to stay below the radar during that time.  Now, however, they have decided to speak out and tell their story, including sharing thoughts on their infamous father.

Steven Jr., discusses that although the wrongful conviction for rape in the 1980s robbed him of an opportunity to develop a relationship with his father, at the same time, he would not trade his current life to get that time back.

“I had a good life.  I would not trade this life to see where that life (had his father not gone to prison) led,” Steven Jr. said.

Steven Jr. also talks about the burden of being his father’s namesake.  He says people are sometimes taken aback or caught off guard when he first says his name, and he even wanted to change his name when he got married until his wife persuaded him it was better to keep with tradition.

In response to a question about his relationship with his father, Bill Avery says, “In one way, I have none.  I just see him as a complete stranger.  I know that he’s my father, but I grew up without a father for so long that it just kind of feels like I don’t have [one].”   The interview also reveals neither Bill nor Steven Jr. have spoken to their father in over 20 years.

The twins’ also feel differently about how whether their father actually killed Teresa Halbach.  Bill is confident that his father did not kill Halbach, but Steven is less sure.

“I have no idea.  I mean… only one person can answer that and that is Teresa.  But she can’t answer no more,” Steven Jr. told the interviewer.