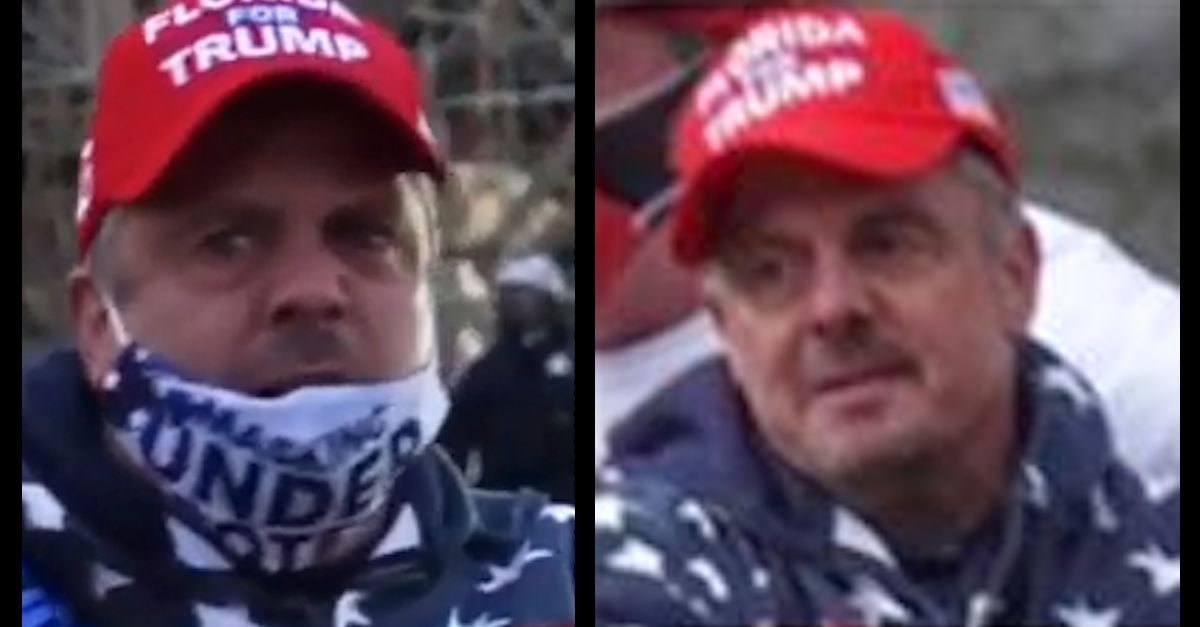 The man identified as Robert Scott Palmer is seen in images procured by the FBI. He is wearing an American flag jacket containing Donald Trump’s name and a red hat which reads “Florida for Trump.”

A man known online by the hashtag #FloridaFlagJacket has been arrested by the FBI and charged with several federal crimes, reports indicate.

According to a press release issued Thursday by the U.S. Department of Justice, Robert Scott Palmer, 53, of Largo, Fla., is charged with several counts with relation to the Jan. 6 siege on the U.S. Capitol Complex in Washington, D.C. Those counts include (1) assaulting, resisting, or impeding certain officers while armed with a deadly or dangerous weapon; (2) obstruction of law enforcement during civil disorder; and (3) knowingly entering or remaining in any restricted building or grounds without lawful authority.

NEW: #FBI Tampa arrested Robert Scott Palmer of Largo on charges related to his role in the U.S. Capitol riot on 1/6/21. Continue to check for updates on PACER and here: https://t.co/q07sKwr0Dm

The Department of Justice announced Palmer’s charges several days after news of his arrest became public.

A federal judge agreed Thursday to release Palmer on a $25,000 signature bond. Under the conditions of his release, Palmer’s travel is “restricted to the Middle District of Florida and District of Columbia.” He must also attend all future court hearings, reside at his current address or seek approval to move, cannot commit any new crimes, cannot obtain new travel documents, cannot take “narcotic drugs unless prescribed by a licensed medical practitioner,” must “submit to mental health evaluation and treatment,” and must continue his employment.

Palmer’s identity as the man pictured wearing clearly conspicuous pro-Trump regalia at the U.S. Capitol on Jan. 6 has been known for several weeks. The FBI posted images showing the man’s face and the man’s acts on Jan. 6 while seeking information as to his identity. An online sleuth known only as “Amy” worked with reporters from Huffpost to track the man’s whereabouts. MSNBC’s Rachel Maddow played video of the man believed to be Palmer using a fire extinguisher to battle police officers at the Capitol.  Video surfaced of the man giving his name to an interviewer wearing the clothing which made him famous.  That video, recorded by CJTV Media, LLC, is embedded below:

Other video which circulated widely online showed the man authorities identified as Palmer spraying a fire extinguisher toward police officers standing guard in a Capitol archway. 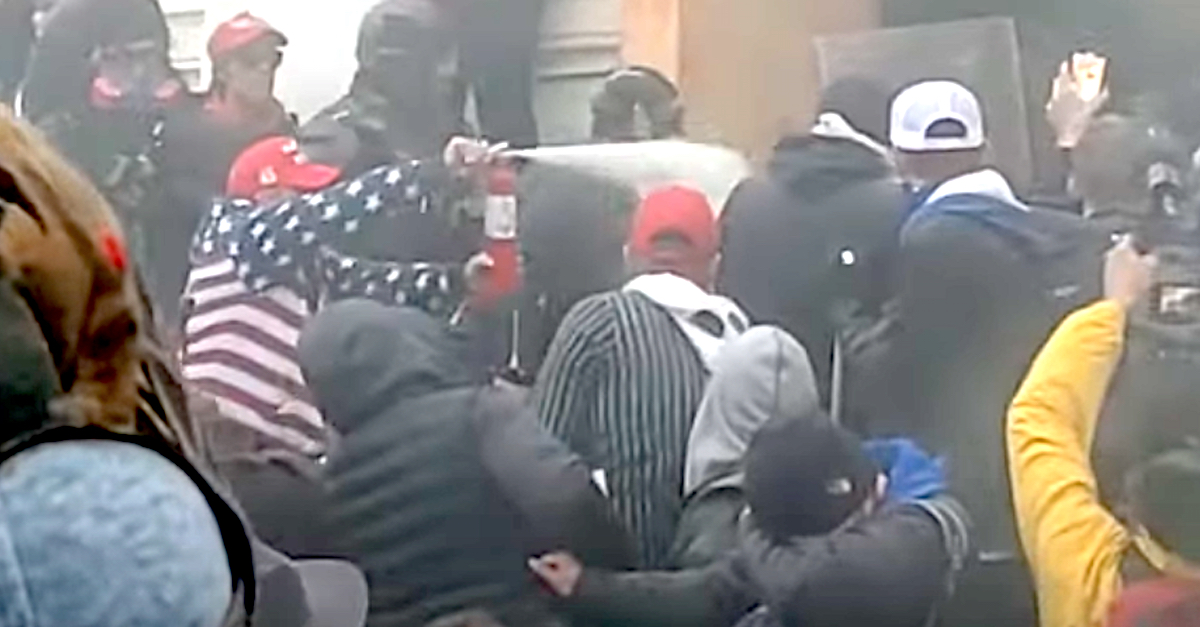 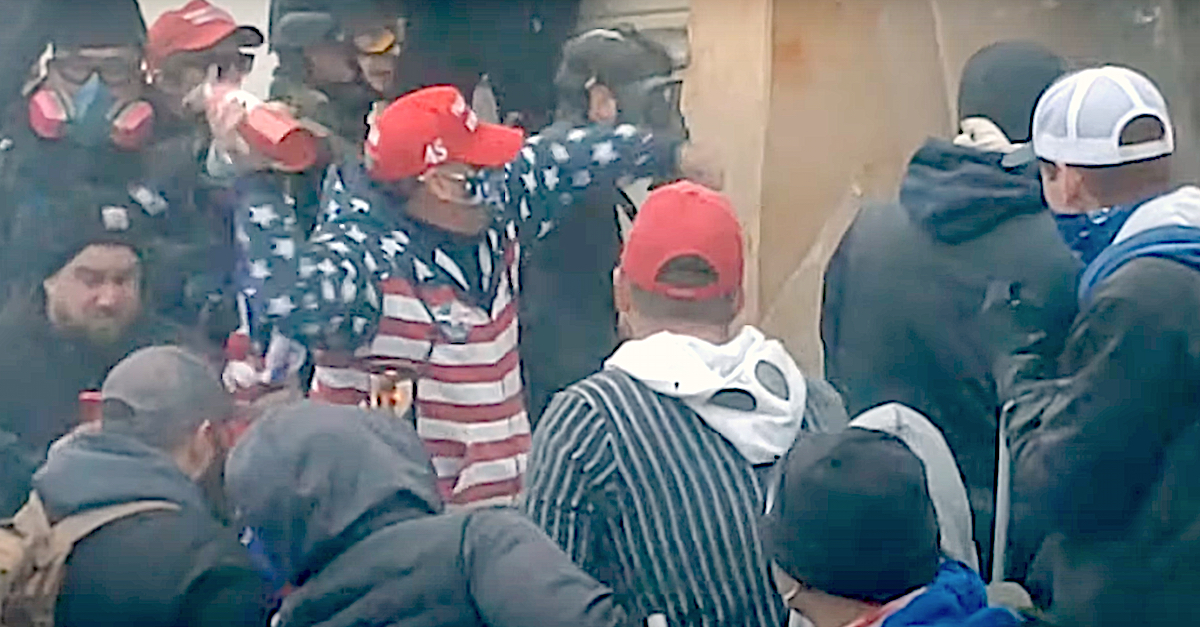 Other video available online appears to show the man identified as Palmer throwing a plank into the archway.

Tampa Bay, Fla. CBS affiliate WTSP-TV caught up with Palmer on Wednesday in federal court. The station noted that he was the owner of a self-described “cleaning restoration business,” which says on its website that it handles such items as tile, grout, carpet, upholstery, leather, and hardwood.

When reached by Huffpost reporters on March 4, Palmer reportedly confirmed that he was present at the Capitol Complex on Jan. 6 “wearing an American flag jacket bearing Trump’s name.” He also reportedly claimed he was struck in the stomach by a police projectile. However, Palmer “clammed up” when pressed about whether he used a fire extinguisher to “assault” a line of police officers, hung up the phone after asserting he would remain silent, and subsequently deleted his Facebook account, the outlet reported.

Watch the video below of the incident which gave rise to the charges (it is cued to 26:04, when the man believed to be Palmer is shown):

[Editor’s note:  this piece has been updated.  It originally reported Palmer’s arrest.  It now includes a full list of the charges Palmer faces and indicates that Palmer has been released pending trial.]