‘This Is Our Capitol’: Penn State Grad and Former Substitute Teacher Arrested for Allegedly Fighting with Numerous Cops, Stealing Property During Pro-Trump Riot 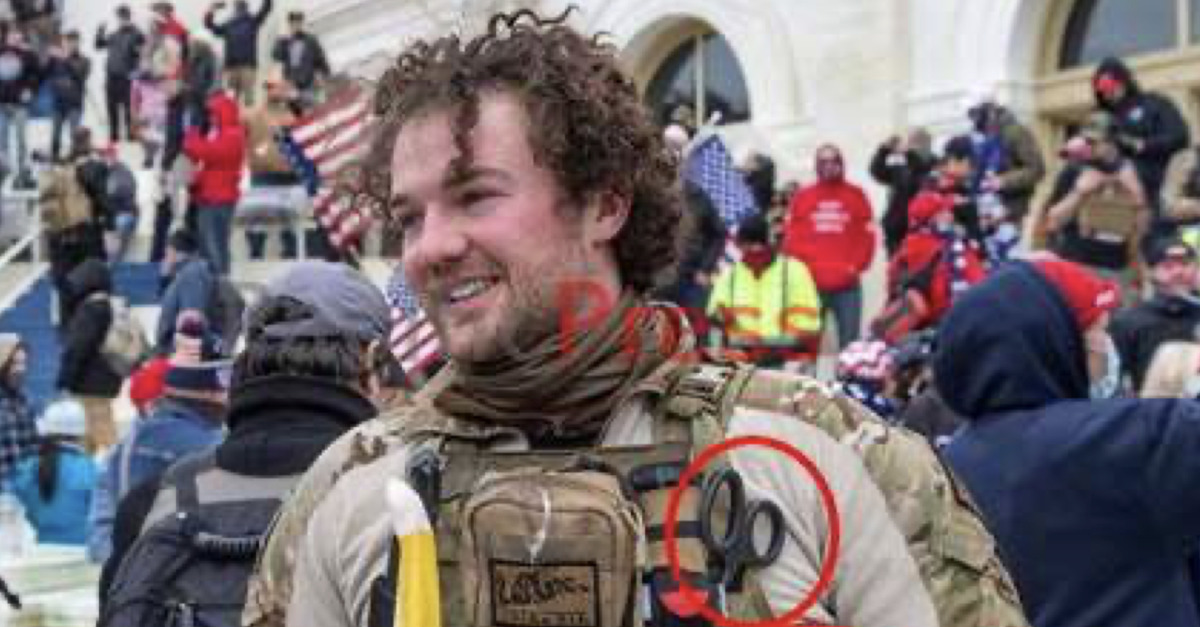 A Penn State graduate has been arrested and charged with numerous crimes in connection with the Jan. 6 attack on the U.S. Capitol Complex, according to a recent filing in D.C. federal district court.

Robert Morss, a now-former substitute teacher, was arrested by the FBI at his apartment in Glenshaw, Pa. on Friday morning on suspicion of having been at the front lines of the violent and deadly pro-Trump attack on the national legislative seat of government.

According to federal prosecutors, the defendant was seen in multiple media photos “wearing tan camouflage clothing with a tactical style vest, scissors tucked in the front of the vest, tan gloves, and at times a red baseball style hat” that bears the inscription of the 45th president’s 2016 presidential campaign slogan–and which has become a call sign for fellow travelers affiliated with his movement.

“Morss had curly hair sticking out the side of his hat and wore clear goggles at times,” the criminal complaint alleges. “Morss also had a blue patch on his right shoulder and appeared to be wearing a weightlifter’s belt.”

Investigators also claim that Morss was part of a “crowd of rioters [who] eventually pushed through the fence line” of the Lower West Terrace area of the Capitol and “forced” law enforcement to retreat during the mid-afternoon on the infamous day in question.

The affidavit details some of his alleged activities:

MORSS is visible in this crowd early on. For example, around 2:09 p.m., a few minutes after the crowd can be seen on BWC [body worn camera] footage unsuccessfully trying to violently push through the fence separating the crowd from the Capitol and while officers are repeatedly asking the crowd to back up, MORSS can be seen on BWC footage. As captured on BWC footage, after being asked to back up, MORSS grabs the officer’s baton and tries to rip it away, as shown in the still below with a red arrow above MORSS. (MORSS does not appear to be successful in ripping away the baton.)

At one point, prosecutors claim, Morss had a bit more success: by ripping a section of fence away from a nearby officer “with the assistance of the other rioters” and then retreating “back into the crowd with the fence.”

Awhile later, the defendant was apparently dumbfounded that officers didn’t simply lie down for the right-wing mob. Morss then allegedly began to upbraid members of law enforcement for what he perceived as a lack of ideological fealty to an imagined shared cause.

“At approximately 2:26 p.m., Morss can again be seen on BWC footage,” the affidavit continues. “While wearing a neck gaiter covering his mouth, it appeared as though Morss was addressing the officers and can be heard saying, ‘You guys are betraying us. You get paid enough to betray your people?’ Morss then points and says, ‘look they are coming in over there.’ As shown in [a] still [image contained in the filing], Morss then says ‘This is our Capitol. This is our Capitol.’”

“Take a look around, back up, we are going to take our Capitol back,” the defendant allegedly told officers minutes later.

The filing goes on to allege that Morss repeatedly tried to rip a helmet visor away from another officer–and failed–and that he successfully ripped a riot shield away from yet another officer.

Shield in hand, Morss allegedly took the lead among a group of rioters and instructed them to make a “shield wall” in order to repulse police and force their way through a tunnel into the Capitol.

“Hey, everyone with a shield, back up and organize!” Morss allegedly yelled. “Make a shield wall! Organize right now and make a shield wall. Where are those fucking shields!”

While an officer was allegedly crushed during the shield wall effort, Morss eventually walked back out of the tunnel and made his want into an unoccupied Capitol safe room by way of a broken window, prosecutors claim.

“At this time, it is unknown what, if any, actions Morss may have taken while inside the room,” the filing notes.

The defendant is charged with: (1) assaulting, resisting, or impeding certain officers or employees; (2) civil disorder; (3) robbery of personal property of the United States; and (4) obstruction of an official proceeding.