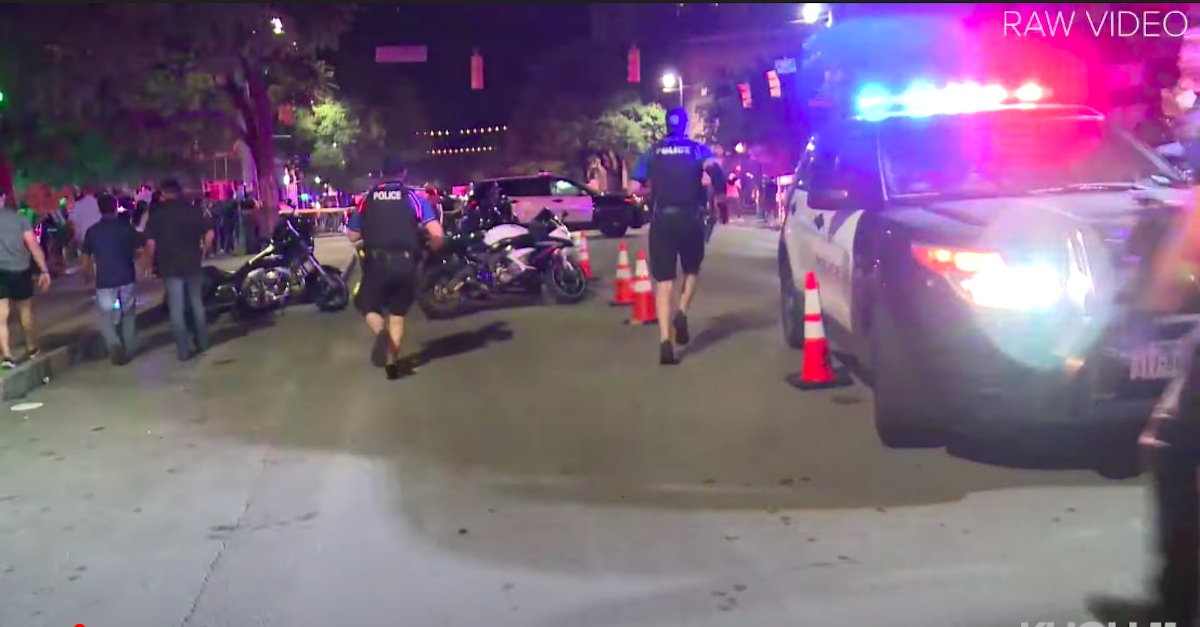 At least 13 people were injured early Saturday morning after shots were fired in the entertainment district of downtown Austin, Texas, law enforcement authorities said. Two of the victims are in critical condition, and police say that the “suspect(s) remains at-large.”

According to the Austin American-Statesman, Austin-Travis County emergency medics responded to emergency calls of an “active attack” being underway at around 1:24 a.m. near the 400 block of East Sixth Street. Several outlets described the post-shooting scene as “chaotic,” with medical first responders taking four of the victims to the hospital while police and private vehicles transported the other nine.

“It was very difficult to contain the scene, it was very difficult for [Emergency Medical Services] to make their way into this crowd,” Interim Austin Police Department (ADP) Chief Joe Chacon said, describing the size of the crowd as near “pre-pandemic” during an early morning news conference.

“And because of the nature of the injuries, officers had to go ahead and use their police vehicles to put some of these shooting victims into their vehicles and transport them themselves.”

Tony Plohetski, a reporter with local ABC-affiliate KVUE, posted video showing the aftermath of the shooting.

NEW: This is video of the aftermath of the downtown Austin shooting showing officers performing first aid on the wounded.

NEW: More video is emerging from the overnight shooting in Austin that injured 13 people.

The department put out a general description of the suspect, described as “a black male, with dread locks [sic], wearing a black shirt and a skinny build.” Chacon repeated that at an early morning press conference, noting that there weren’t many details about the suspected shooter other than: “Black male wearing a black shirt with a skinny build and with dreadlocks—dreadlock-type hair.”

APD officers have been reviewing footage of the incident from multiple sources for additional information; aggravated assault and homicide unit detectives had already begun investigating the incident along with organized crime and gang units, Chacon said. Based on the available information, the department said that it appeared the shooter fired randomly into a large crowd and evidence indicated that the shooting was an isolated incident, although Chacon said that could not be fully confirmed while the suspect remained on the loose.

“I cannot say that there’s no further public danger at this point, because the suspect is not in custody,” Chacon said. “It appears at this point to be isolated to this one area, but as we receive more information on that we’ll put it out.”

The interim chief also noted that there was a “high visible presence” of officers in the area, as is usually the case in the entertainment district.

“Security [in the area] is always pretty good down here because of the way that we cordon off the streets, block off the streets, using barricades and try to keep people safe that way,” Chacon said. “But what we have seen in recent months and over the last year or so is an increase in gun violence,” he said, “and so this is just emblematic of that, it continues, and it’s something we’re trying to work to decrease.”

A witness who was at the bar when the shooting began told the American-Statesman that he only heard shots “from a single weapon and then everyone started running in different directions.”