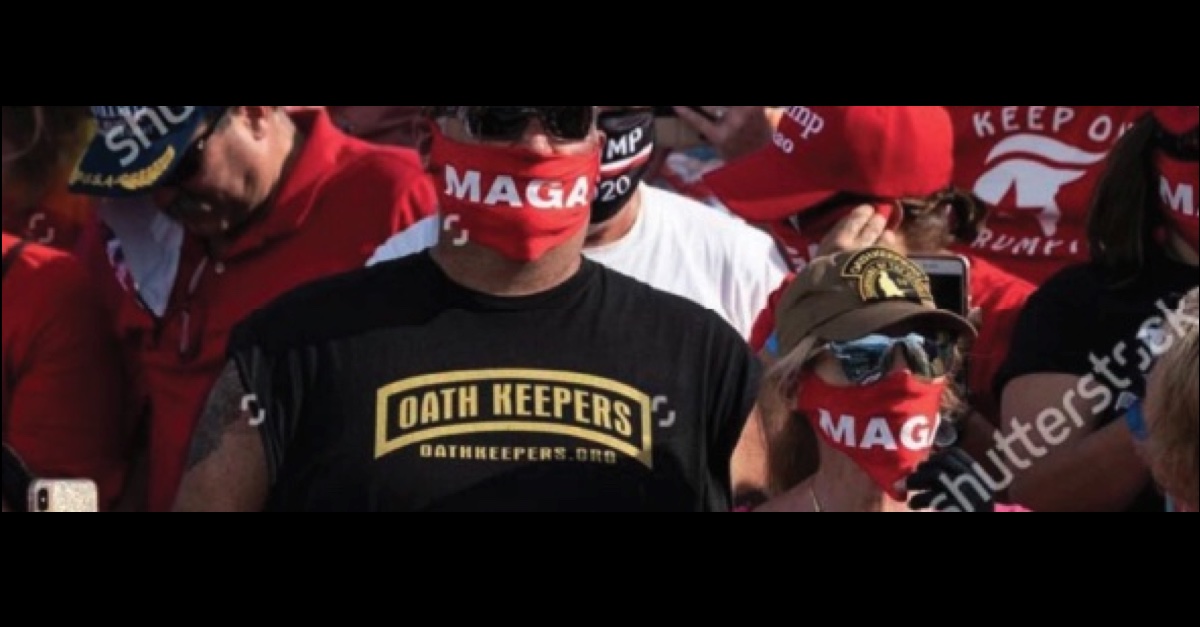 A husband-and-wife pair of Oath Keepers extremist militia members have sued the House committee investigating the Jan. 6 attack on the Capitol, saying that the subpoena issued by the committee for cell phone records will prejudice the Jan. 6-related criminal conspiracy case against them.

Kelly Meggs, the leader of the Florida chapter of the extremist Oath Keepers militia group, and his wife Connie Meggs are charged with conspiracy, obstruction of an official proceeding, destruction of government property, and other crimes related to the Jan. 6 attack on the U.S. Capitol building. The couple, along with several other members of the Oath Keepers, joined the mob of Donald Trump supporters that overran police at the Capitol in an attempt to stop the Electoral College from certifying Joe Biden‘s win in the 2020 presidential election.

They are also two of 18 defendants in a criminal case against Oath Keepers from multiple states who prosecutors say coordinated and prepared for the Capitol attack in the days leading up to Jan. 6.

The pair sued the members of the House Select Committee investigating the attacks, along with House Speaker Nancy Pelosi (D-Calif.), alleging that the committee’s investigation into their alleged attempts to coordinate and plan the Capitol assault could subject them to prejudice in the criminal case.

On Dec. 18, the complaint says, the House committee served Verizon with a subpoena for “information related to Ms. Meggs’ Verizon Account which also includes Mr. Meggs’ cellular telephone number on a family account plan for the period of November 1, 2020, through January 31, 2021, which phone is used by Mrs. Meggs and a family plan.”

The subpoena also allegedly seeks the names and addresses of people on the account, phone numbers, length of service and other information, and records of all calls and messages. It is “overly broad, and highly prejudicial,” according to the complaint.

“The Committee has designated the January 6th Protests as ‘Terrorists,'” the complaint says. “This designation in a small jurisdiction such as the District of Columbia will create prejudice among the potential jury pool and prevent the Meggs’ from getting a fair trial.”

The complaint, filed Monday, is not short on breathless historical comparisons and dramatic rhetorical flourishes.

“The Select Committee’s Subpoena invades the privacy of a U.S. citizen, worse than what occurred under the British Crown, Congress itself abrogated those rights and shielded telecommunications users like the Plaintiff from the piercing of the privacy of their communications by its own statutes,” the lawsuit says.

“Allowing an entirely partisan select committee of Congress to subpoena the personal mobile phone data of Mrs. Meggs and her husband, alleged members of the Oath Keepers, an organization that was merely a supporter of President Trump’s and not listed ‘terrorist’ seeks to work a massive chilling of current and future activists’ associational and free speech rights,” the complaint says. “What if the opposite were to happen to ‘Black Lives Matter’ activists during a Republican majority? Without limit to date range or geography or persons? There would be no one to challenge power, and the First Amendment would effectively be speech sponsored by the government and major corporations.”

The complaint also ponders: “What if Congress were to demand information from anyone who did not donate to or did not vote for the current office holders?”

According to the complaint, the House committee doesn’t have the legal authority to issue the subpoena in the first place.

“[B]ecause Congress cannot over-throw the U.S. Constitution or cancel the First Amendment, Congress cannot investigate political beliefs, violate the Sixth Amendment and the right of a fair trial, or violate the Fourth Amendment search and seizure law,” the complaint says. “Because Congress has no power to end free speech or repeal the First Amendment, it has no power to investigate political beliefs or the exercise of free speech. By investigating the causes of the ‘terrorist attack,’ Congress by definition would be investigating ‘political beliefs’ as January 6th took place both at the Capitol, where politics are fundamental, and in relation to a Rally for the Incumbent President.”

The complaint invokes the “Marital Communications Privilege,” which is generally aimed at protecting communication between spouses. But the complaint doesn’t appear to make a showing that the communications were intended to be confidential, or that they weren’t shared with a third party, both of which are required in order to successfully invoke the privilege.

The Meggses are seeking declaratory relief, including judgments that the Verizon subpoena is unlawful, unenforceable, and serves no legislative purpose.

They are also seeking a declaratory judgment “that the Select Committee is acting for political purposes and not for legislative purposes,” and judgments that declare the subpoena violates First, Fourth, Sixth Amendment right, the Marital communications privilege.

Connie is charged with conspiracy, federal obstruction, destruction of government property, and being in a restricted building or grounds. Kelly faces the same charges, plus an additional charge for tampering with documents and proceedings; he is accused of deleting data on Jan. 7 from his cell phone with the intent to prevent it from being used in the FBI investigation into Jan. 6.

Connie and Kelly are represented respectively by Juli Haller and Jonathon Moseley, who are also part of the couples’ respective legal teams.

Haller previously participated in an effort to overturn the 2020 election widely known as the “Kraken” litigation, named after an analogy by attorney Sidney Powell to a mythical, octopus-like monster dramatized in the film “Clash of the Titans.” The litigation failed in spectacular fashion, resulting in a federal judge referring Haller, Powell, and their co-counsel to their respective bars for possible disciplinary proceedings.