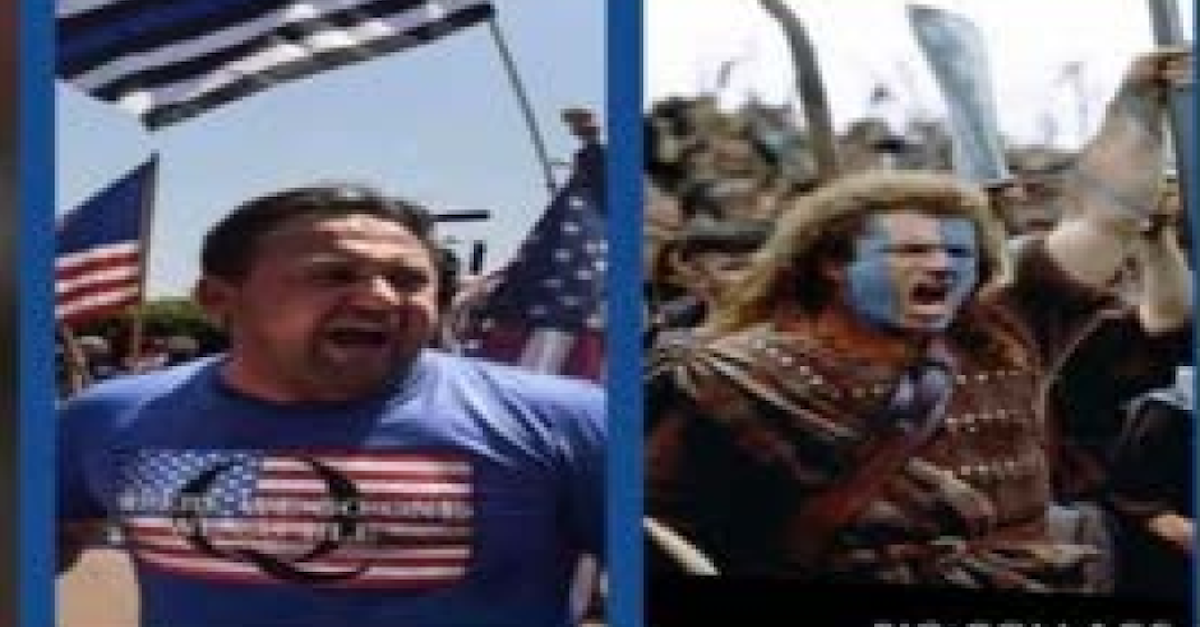 In his mind, New York City sanitation worker Dominick Madden may have been Mel Gibson’s Scottish warrior in “Braveheart”—with a QAnon hoodie and a Donald Trump flag rather than a kilt and a sword. But court papers depict him as just another rioter hopped up on conspiracy theories and tramping around inside the U.S. citadel of democracy.

The FBI arrested Madden in Brooklyn on Thursday, less than a week after the New York Post first identified him as a man under federal investigation as a city worker caught on video during the U.S. Capitol siege.

Cited in an affidavit supporting Madden’s criminal complaint, the Post article tipped off an FBI agent to request footage from Capitol Police to further their investigation. Agent Michael Attard had been looking for whether the man in the same QAnon hoodie seen in the Post‘s article entered the building. 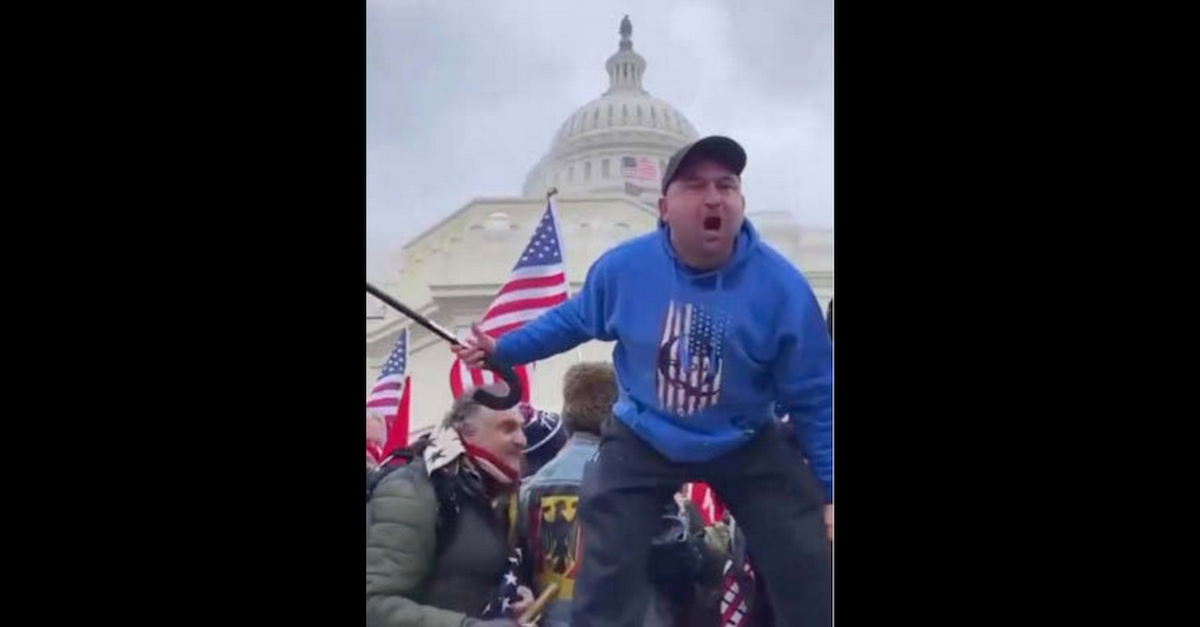 According to the affidavit, Attard found Madden on a quick 13-minute spin through the building: entering it through the Senate wing doors at 2:59 p.m. and exiting from where he came in at 3:12 p.m.

“Dominick Madden is seen on video footage walking to the Crypt area of the U.S. Capitol Building[…] and returns back to the Senate Wing where he stands and speaks to other rioters,” court papers say. 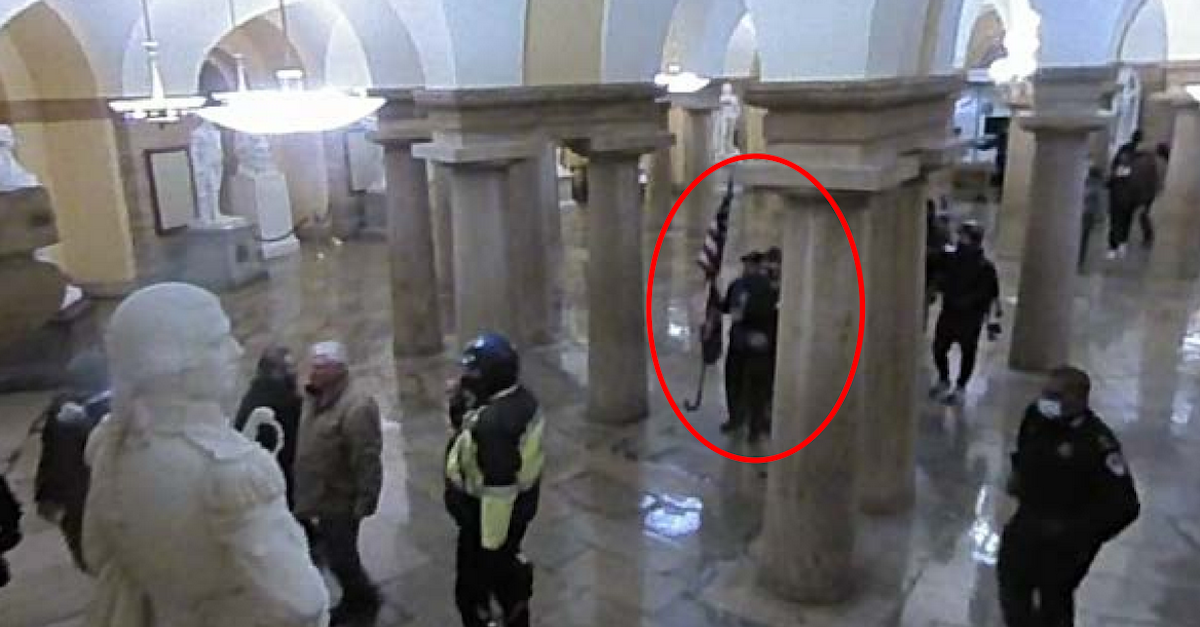 Using records from the Department of Sanitation, the FBI says it found Madden’s phone number, which led authorities to his profile image on Telegram: a picture of himself with a QAnon shirt next to the “Braveheart” scene.

“On January 19, 2021, New York City Department of Sanitation investigators advised the FBI that Dominick Madden was interviewed on or about January 15, 2021, based on the New York Post newspaper article,” court papers say. “In the interview, Dominick Madden advised investigators for the New York City Department of Sanitation that he was out on sick leave during the incident in question on January 6, 2021, and admitted to being out of the house without authorization during this time frame.”

Madden’s New Jersey license plates captured him crossing the Delaware Memorial Bridge toward Washington, D.C. on the day before the riot and returning back in the direction of New York City the following day.

Adherents in the QAnon conspiracy theory, who believe in the existence for a child-eating cabal of Democratic Satanist pedophiles, have been charged repeatedly with federal crimes in connection with the U.S. Capitol siege. Led by an anonymous message board leader “Q”—claiming to be a high-level government official—adherents believe that Trump opposed this “Deep State” and planned to deal with them imminently, and bloodily.

In a lengthy footnote of an affidavit supporting charges against another Capitol rioter, the Justice Department debunked the “discredited” QAnon theory.

“QAnon believers are waiting for two major events, which they refer to as the ‘the Storm’ and the ‘Great Awakening,'” part of that footnote stated. “The ‘Storm’ refers to a day of violence which will result in mass arrests, military trials, and executions of the members of the cabal. According to QAnon lore, ‘the Storm,’ will be followed by the ‘Great Awakening,’ which generally refers to the belief that the truth of the central tenets of QAnon will be revealed to the world.”

Now suspended from his job, Madden is expected to have his first court appearance virtually on Friday.

(Photos via an FBI affidavit)