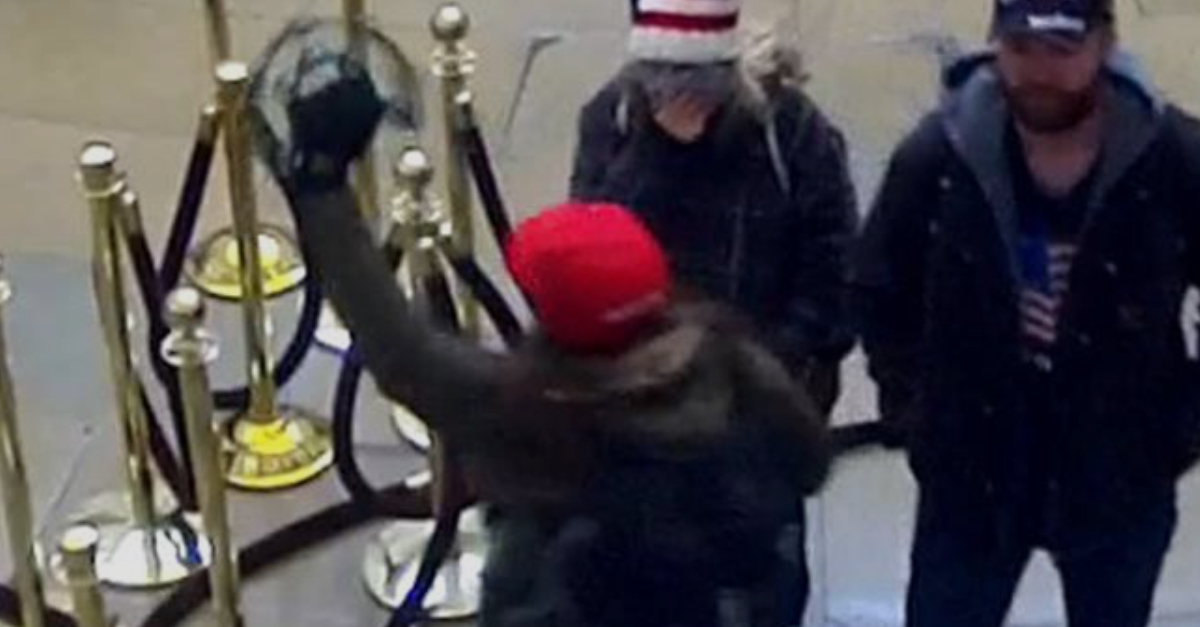 Sara Carpenter plays the tambourine while inside the U.S. Capitol on Jan. 6.

A tambourine-shaking former New York City Police officer previously charged in the Jan. 6 breach the U.S. Capitol pleaded not guilty to the charges against her during her federal court arraignment late on Wednesday morning.

The prosecution clarified that Carpenter’s original charge related to disorderly conduct in a restricted building or grounds was specifically filed because she allegedly entered and remained in the temporary residence of the vice president.

Carpenter, who is currently out on a personal recognizance bond, pleaded not guilty to the raft of additional–and mostly more serious–charges in a digital video appearance before the court.

Arguing for the two-month pause, the prosecution said that the siege of the Capitol resulted in the “largest federal criminal prosecution in [U.S.] history” and noted that the government is currently poring over the contents of “over 2,000 digital devices [and] thousands of hours of surveillance footage” from inside and around the U.S. Capitol Complex as well as additional evidence.

Neilson also argued that the continuance would likely be in the best interests of the former police officer. The defense agreed with that as well.

Judge Boasberg scheduled Sept. 8, 2021 as the tentative date for Carpenter’s next appearance. That upcoming hearing will also be conducted via video conference and is currently slated for an 11 a.m. start time.

“The Court finds that the period from July 7, 2021 through September 8, 2021, inclusive, is excluded from the Speedy Trial calculation in the Interest of Justice,” the court noted in a terse minute order released after the Wednesday proceedings.

“No pre-trial violations by the defendant,” Boasberg remarked as the hearing drew to a close–both a warning and assessment of Carpenter’s behavior post-arrest so far. The judge admonished her to keep up the good behavior because it will help her “down the road.”

According to federal authorities, Carpenter admitted to taking part in the failed effort to stop the counting of Electoral College votes which certified President Joe Biden‘s November 2020 win against former President Donald Trump. She went viral after raising and banging on a tambourine in a video clip widely shared on social media in the riot’s immediate aftermath.

“The CCTV video of the Capitol Rotunda next shows the woman cross the room to an exit,” the original criminal complaint alleges. “Before exiting, however, the woman turns back to the room and raises here hands in the air. In her left hand, she holds a tambourine, which she shakes several times before turning back around and exiting the Rotunda.”