Pelt-Wearing Son of a Judge Posts Bail After Capitol Siege. His Older Brother, Who Attended Outdoor Pro-Trump Rally, Will Watch Him. 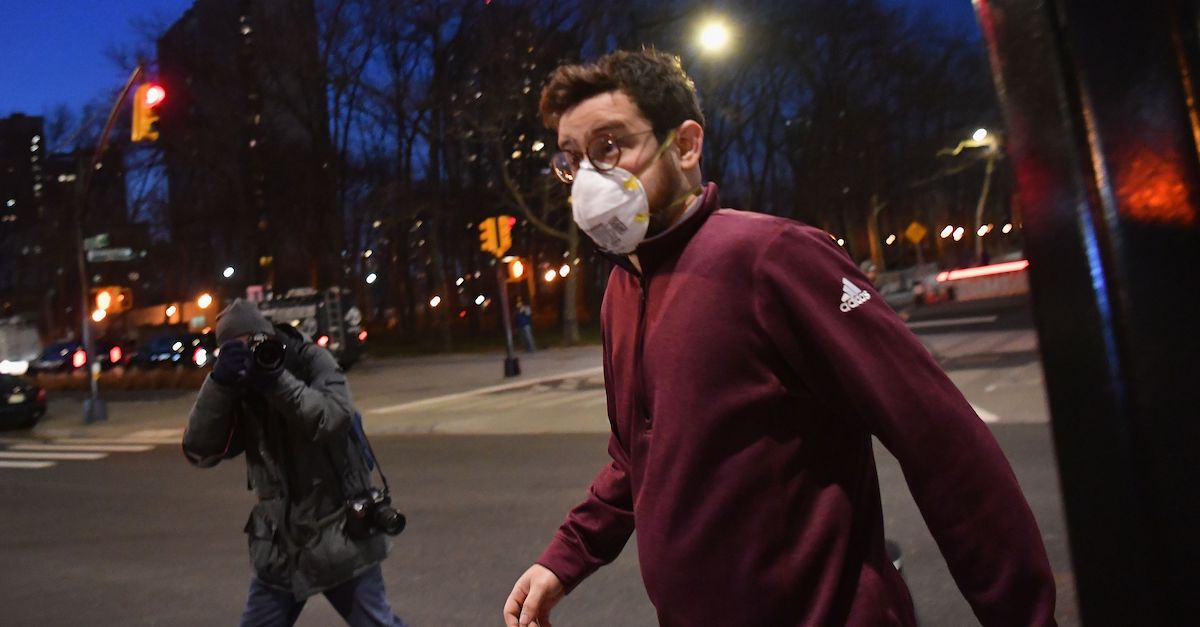 Aaron Mostofsky appears at the Brooklyn Federal Courthouse on January 12, 2021 in New York City, after being arrested for participating in last week’s violent rampage at the US Capitol building.

Aaron Mostofsky, the fur-pelt-wearing would-be insurrectionist who is the son of a Brooklyn judge, posted bail on Tuesday afternoon after being virtually arraigned by a federal judge in Brooklyn.

Describing Mostofsky’s behavior as “a mob attack and a rampage on the U.S. Capitol,” Assistant U.S. Attorney Josh Hafetz noted that “the government is deeply troubled by the conduct of the defendant.” That did not prevent Mostofsky from being able to easily secure bail, as the scion of prominent Democrat and Brooklyn Judge Steven “Shlomo” Mostofsky.

U.S. Magistrate Judge of the Eastern District of New York Sanket J. Bulsara oversaw the combined bail and extradition hearing, via telephone and Cisco Webex. Occasionally chaotic, but mostly deliberate, the marathon session got off to a glacial start after being initially plagued by technological difficulties.

Though the arraignment hearing was held in the Brooklyn-based Eastern District of New York, Mostofsky will eventually be extradited to face multiple federal charges filed by the U.S. Attorney for the District of Columbia. This could occur in as soon as two weeks, according to the Department of Justice.

As Law&Crime previously reported, federal agents arrested Mostofsky on Tuesday morning in Midwood, Brooklyn. A criminal complaint filed against him on Monday alleged that he stole a Capitol Police vest and riot shield, unlawfully entered a restricted government building and disorderly conduct during the pro-Trump assault on the U.S. Capitol Complex last Wednesday. The complaint was unsealed on Tuesday after the arrest was effectuated.

Mostofsky was infamously filmed decked out in various furs with a walking cane, as well as an allegedly stolen police shield and bulletproof vest, the basis of a felony theft charge that exposes him to maximum 10 years in prison, plus time from two other federal counts.

The defendant was more than willing to respond when questioned inside of the Capitol on Jan. 6. The video speaks for itself:

Outlining Mostofsky’s rights in a pandemic age of virtual criminal proceedings, Judge Bulsara patiently explained to Mostofsky that “the court behind me is in Brooklyn” while he was actually going to be tried by a court in the nation’s capital. Mostofsky signaled that he was well aware of the circumstances and allowed the court to sign a document on his behalf waiving certain rights. An identity hearing and probable cause hearing was also waived by the defense. The court then took pains to spell out the Brady procedure and said they would file a reminder and notice outlining the government’s responsibilities there. (The landmark 1963 U.S. Supreme Court ruling, Brady vs. Maryland, held that prosecutors must disclose any evidence in their possession that can help the defendant [i.e. “exculpatory evidence”].)

Most of Tuesday’s hearing concerned the conditions of Mostofsky’s bail and the two third-parties who will be responsible for ensuring that those conditions are met by the defendant.

Neil “Nachman” Mostofsky is surety number one. He also attended the “Stop the Steal” rally but apparently did not take part in the attack on the Capitol, which left five dead and caused massive amounts of property damage to the national seat of government.

During the hearing, Aaron’s older brother said that the two speak to one another “quite often.” Neil, previously identified in various reports by what he termed his “Jewish name,” runs a non-profit organization “that educates members of Congress.” but, he claimed, which is currently “monetarily defunct” due to COVID-19.

Specifically, the elder Mostofsky serves as the executive director of Chovevei Zion, a right-wing organization that self-professedly promotes “American Exceptionalism,” “Limited Government” and a “Unified Jerusalem” under the control of “Sovereign Israel,” the controversial idea that the Palestinian West Bank—which the group refers to as Judea and Samaria—should be incorporated into the State of Israel.

The elder Mostofsky will have to make sure that younger does not commit any crimes, flee the jurisdiction he is confined to, or otherwise attempt to evade the law. Potential lawlessness on his brother’s part might very well result in prison time for the non-profit director.

Yisroel Shenkman is surety number two. A distant relative related by marriage–his wife is Mostofsky’s brother’s cousin–the self-described “real estate professional” blithely paid the younger Mostofsky’s $100,000 bond that will allow the defendant to reside with his older brother in Brooklyn for the near and foreseeable future.

Audibly combative and curt, Shenkman said he was completely unaware of the facts of the situation when asked by the court whether he understood what he was signing up for—while insisting that he didn’t care about putting up the legal collateral.

Judge Bulsara didn’t like that protestation of ignorance at all.

He then spent a few minutes explaining to Shenkman that a surety has to know the details about the defendant’s case in order to pony up the funds. The two then went back-and-forth a bit until the court was satisfied that Shenkman understood the gravity of the legal issues as well as the alleged facts of the matter.

When asked if the court could sign a document outlining his obligations on his behalf, however, Shenkman snapped that they may not and that he would sign his own name. This appeared to be an unexpected turn of events and later caused some consternation with the government attorney on the line but the document was eventually emailed over before the hearing came to a close.

In the end, Mostofsky was released to his brother’s recognizance and directed to immediately report to pre-trial services so that he can be outfitted with an ankle monitor.

He will not be allowed to leave any of New York City’s five boroughs. Pre-trial services may allow him to travel to Long Island to visit his mother’s grave—which is located in the census-designated place of Elmont, New York—at their discretion. Mostofsky will be subject to and and required to undergo mental health and drug testing, with the potential of mandatory treatment for any such issues that may arise. He’ll also be subject to a curfew as determined by pre-trial services.

Mostofsky also cannot change his phone number or his residence without alerting the government and his attorney. He may not consumer or use any kind of controlled substance without a prescription. The judge also painstakingly explained that Mostofksy cannot violate any federal, state or local law–and noted that breaking the law would subsequently open him up to three separate charges: (1) the initial crime for today’s arraignment; (2) the potential new crime; and (3) violating bail. Bail violations, the judge explained, must be punished with a consecutive prison sentence under the federal rules.

Defense attorney Jeffrey Schwartz said he had only one concern: the prohibition against discussing the case with potential co-defendants or potential co-conspirators, claiming his client would not know who they are.

“This is a standard condition, Mr. Schwartz,” and exasperated Bulsara replied. “It requires your client to reach out to you. I understand this may be a large universe of people.”

The only other tension between the defense itself and the court occurred during a brief moment when Schwartz attempted to preview his client’s defense in service of leniency on the bail request.

“He was not part of the mob,” the attorney claimed. “He was not rampaging. He was caught up in it. He understands how the whole thing in Washington got out of hand.”

Schwartz went on to say that his client would be on his best behavior and that he now understood what he did on Jan. 6 was wrong.

Judge Bulsara finally sighed out: “No.”

“The charges are serious,” the court intoned, adding that the evidence against the defendant was “significant.”