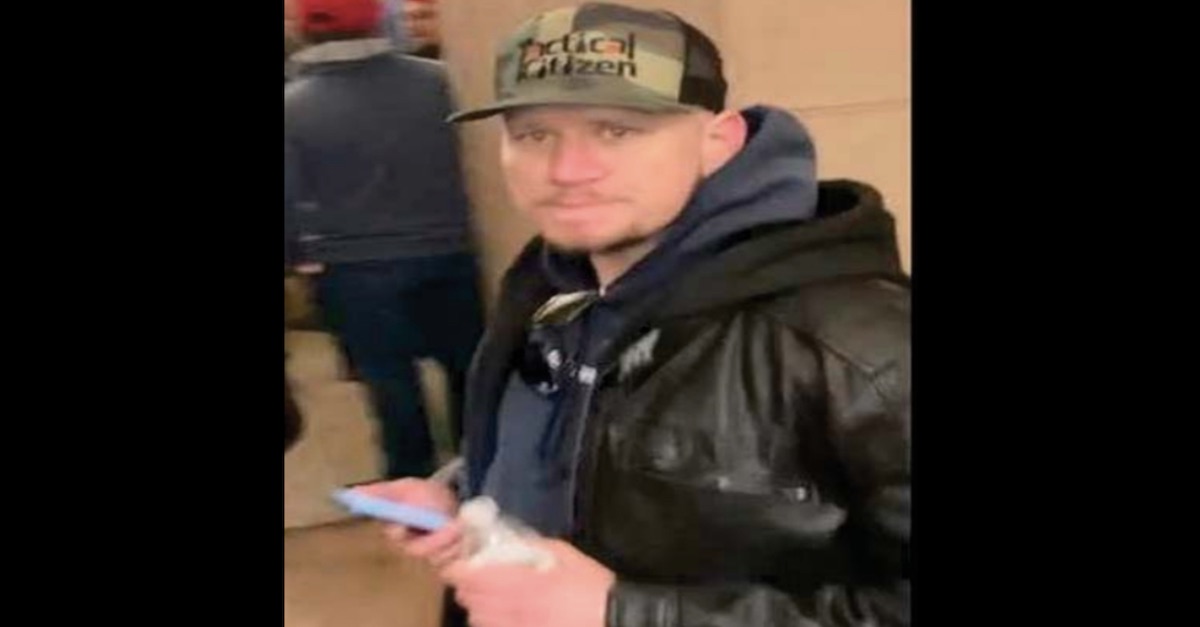 This is not the kind of name recognition most business owners hope for.

Federal authorities say they identified a Montana man as one of the people who took part in the Jan. 6 riots at the U.S. Capitol after multiple videos showed him inside the Capitol Complex wearing a hat bearing the name of the firearms training school that he started in 2018. As a result, Andrew Cavanaugh, the owner and president of Tactical Citizen, LLC, is now facing a slew of federal charges.

According to the criminal complaint filed Monday in the U.S. District Court in Washington, D.C., FBI investigators sifted through a compilation of videos posted to the social media site Parler and found several showing Cavanaugh wearing a camouflage-colored baseball hat with the “Tactical Citizen” name across the front.

In one of the videos, a person filming from inside the Capitol can be heard loudly yelling, “Where are the fucking traitors at? Drag them out by their fucking hair!”

“As he speaks, the white male wearing the Tactical Citizen baseball cap, replies off camera, ‘Yeah!’” according to the charging document.

Investigators were then able to trace the company back to Cavanaugh “due to the unique name on the baseball cap.”

A subsequent search of his public Facebook account showed him posting on Jan. 3 asking if anyone wanted to join him in D.C. for the pro-Donald Trump rally. In a later comment, he confirmed that he purchased a plane ticket from Montana to Washington for $535.

Cavanaugh is far from the first Capitol rioter to be identified and charged based on their clothing, including: an Ohio man who wore a jacket with his company name and phone number on it; a Pennsylvania man identified by his varsity jacket and pictures with Fox News hosts; and a Republican district leader who wore his Knights of Columbus jacket with specific chapter information. Others have been tracked down by authorities because co-workers recognized them and called in a tip.

According to Cavanaugh’s LinkedIn page, Tactical Citizen is a special school aimed at increasing public safety by “providing immersive training to Citizens in firearms, defensive tactics, and other emergencies and exigent circumstances.”

The company’s website goes into more detail on the organization’s mission and criticizes politicians who support gun control measures.

“Shooting after mass shooting, then a school shooting; we all watch the chaos of these events unfold with what seems like ever-increasing frequency. Politicians take to the news and begin a campaign against law abiding citizens and the Constitution of the United States,” the site’s “about” page states. “They attack guns themselves yet fail to introduce any real solutions to make our public (and our children) safer. This is where it ends. We, the people, ARE the solution. By arming and educating our citizens in both self-defense and the defense of others, they will refuse to be victims and the terrorist that continue to strike fear into the hearts of our citizens will lose their power.”

Cavanaugh is facing charges of knowingly entering a restricted building without authority and intending to impede or disrupt the orderly conduct of Government business.