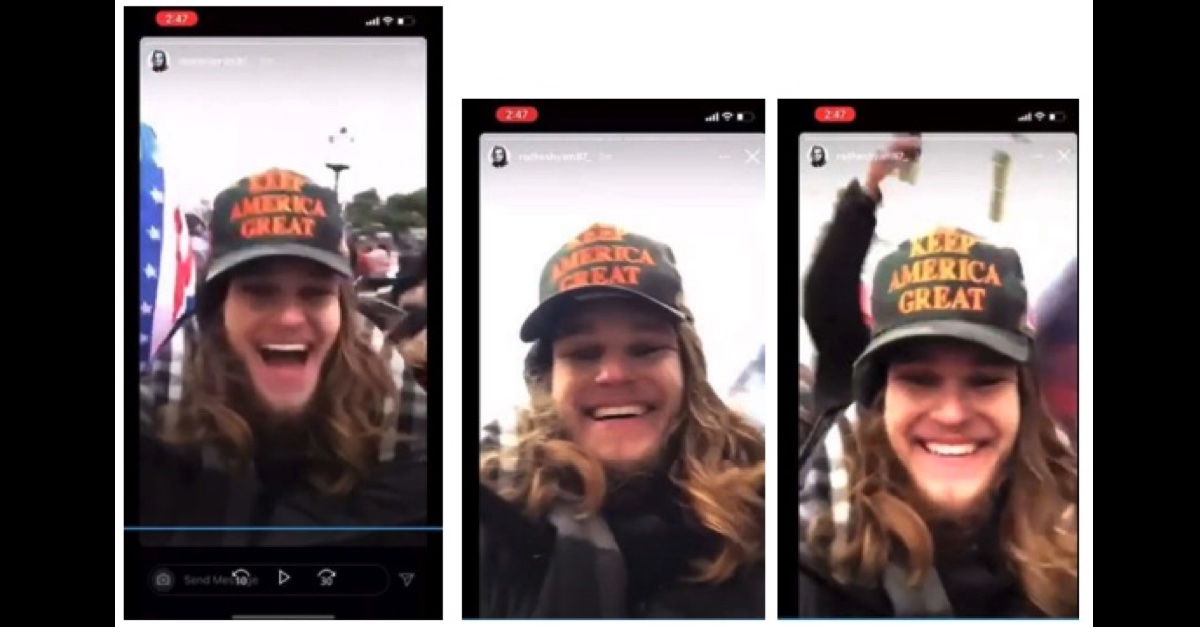 Christian Kulas and Mark Kulas Jr. both appeared before Senior U.S. District Judge Thomas Hogan on Monday. They each pleaded guilty to one count of parading, demonstrating, or picketing in a Capitol building.

Christian, 24, was arrested in June and charged with unlawful entry on restricted building and grounds, and disorderly conduct on U.S. Capitol grounds.

Like many other Jan. 6 defendants, Christian posted his activities to social media—specifically to his Instagram account, where he appears to have used a name other than his own for his profile.

Although the name on the profile is “Radheshyam Bomeesh,” the affidavit identified that the account was registered to an email address used by Christian, and a profile picture that appears to be him.

In his Instagram profile, Christian describes himself as “Yogi, Spiritual Catalyst, Alchemist.” 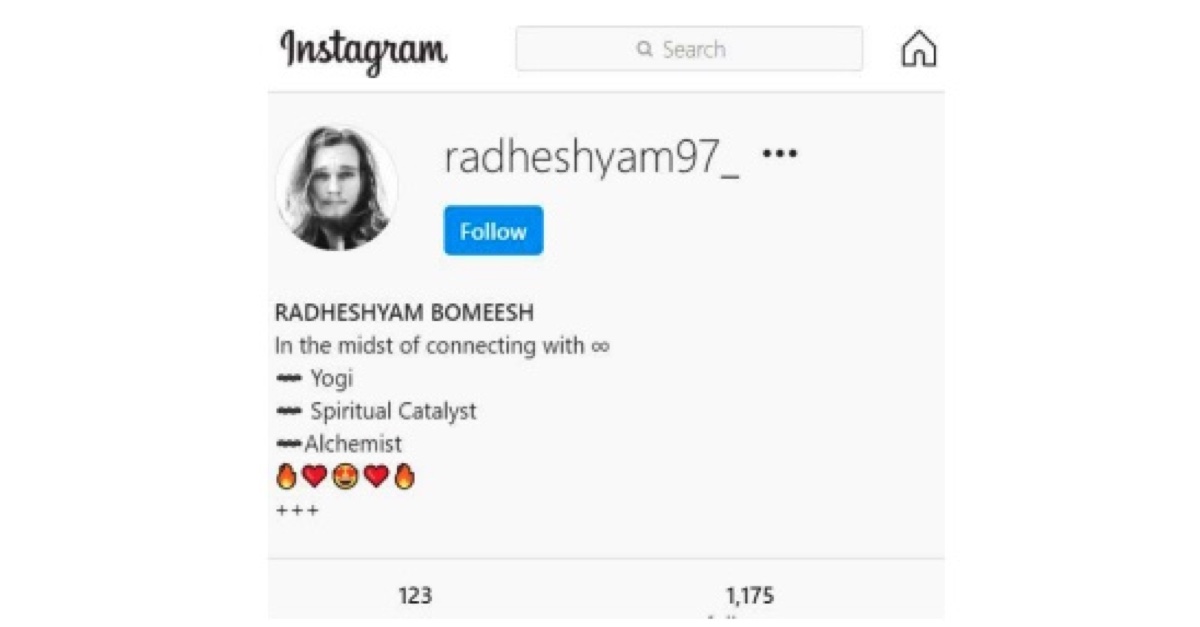 Tipsters identified Christian to the FBI through his social media posts. He had posted multiple videos to Instagram, starting with one from then-president Donald Trump’s “Stop the Steal” rally. He took video while walking a crowd toward the Capitol building, and another one from outside the Capitol showing people climbing the exterior wall of the building.

A fourth video showed a large crowd walking up the steps of the U.S. Capitol. According to the affidavit in support of Christian’s arrest, this video “includes a moment where the camera pans around and shows the face of the individual that appears to be operating the camera. The individual depicted in the video is laughing. The individual is wearing a dark baseball type hat with “KEEP AMERICA GREAT” in bright orange letters on the hat. The individual was also wearing a dark coat with a Burberry print around the hood of the coat[.]”

A fifth video was taken from inside the Capitol building, and a voice is heard saying “Storming the Capitol,” the affidavit says. That voice was Christian, according to an unnamed “cooperating witness” who knew Christian from middle school and high school, and was familiar with his voice, the affidavit says.

Christian was also identified in the Capitol by his own mother, who apparently was pleased to identify Christian as one of the people at the Capitol on Jan. 6.

According to a text exchange over Instagram, someone sent Christian’s mother pictures of Christian, and asked: “Is this your son?”

The user later determined to be Christian’s mother replied “Yes,” followed by a smiling emoji. She also appears to have “liked” the photo of her son that was sent to her. 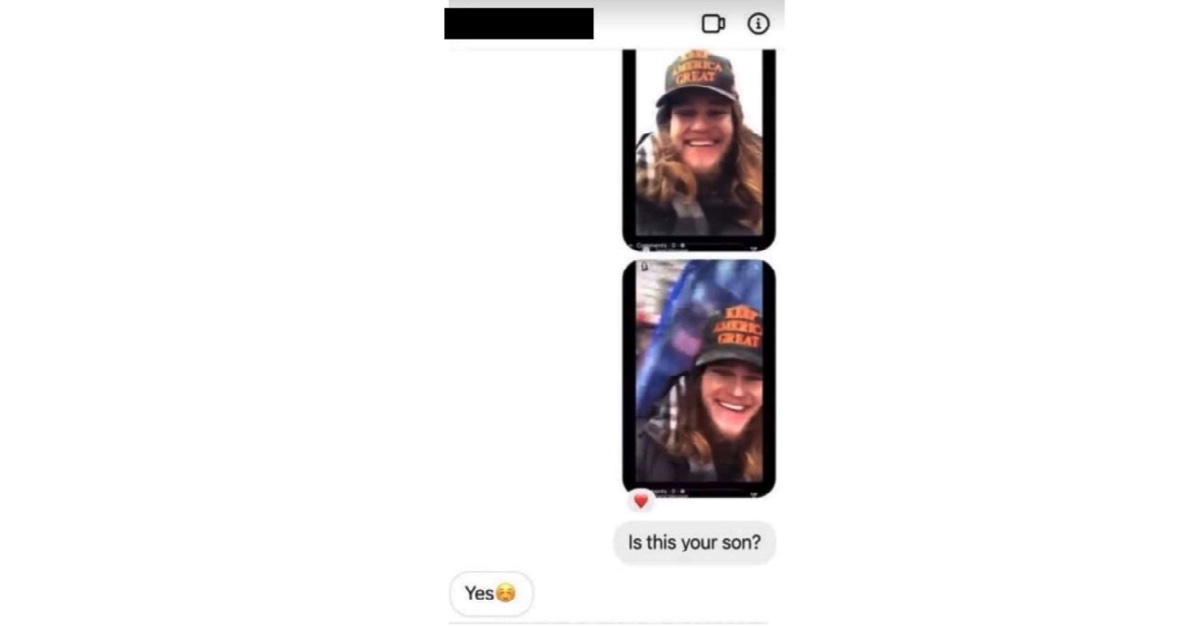 Hogan, perhaps a nod to the fact that some Jan. 6 defendants have moved to withdraw or appeal their guilty pleas, told Christian that once he entered his plea, it would be difficult to withdraw it later.

“Any concerns have to be heard now,” said Hogan, a Ronald Reagan appointee. “Under the law, if I’ve taken a valid plea, it’s very diff to withdraw. You have to be convinced this is what you want to do.”

The indictment against Mark, 27, was filed on Nov. 19, charging him with one count of parading, demonstrating, or picketing in a Capitol building. The complaint was not released prior to his arraignment and simultaneous guilty plea.

Christian’s arrest made local headlines as both he and Mark are the sons of the founders of Kulas Maids, a decades old cleaning services located in Chicago’s wealthy North Shore area.

At Monday’s hearing, Mark’s lawyer, Rachel Cannon, who also represents Christian, told Hogan that her client has been diagnosed with Asperger syndrome, and this diagnosis will be discussed in detail in connection with his sentencing.

Christian told Hogan that he is currently receiving treatment at the Neuroscience Center in Illinois; it’s likely this treatment will also be discussed in his pre-sentencing filings.

Both Christian and Mark could face up to six months in prison and a $5,000 fine under the federal parading statute.

Read the affidavit detailing Christian’s actions on Jan. 6, below.