Feds Say Roger Stone Associate with Oath Keeper Ties Shouted ‘All That’s Left Is the Second Amendment’ on Jan. 6. He Just Got Bail. 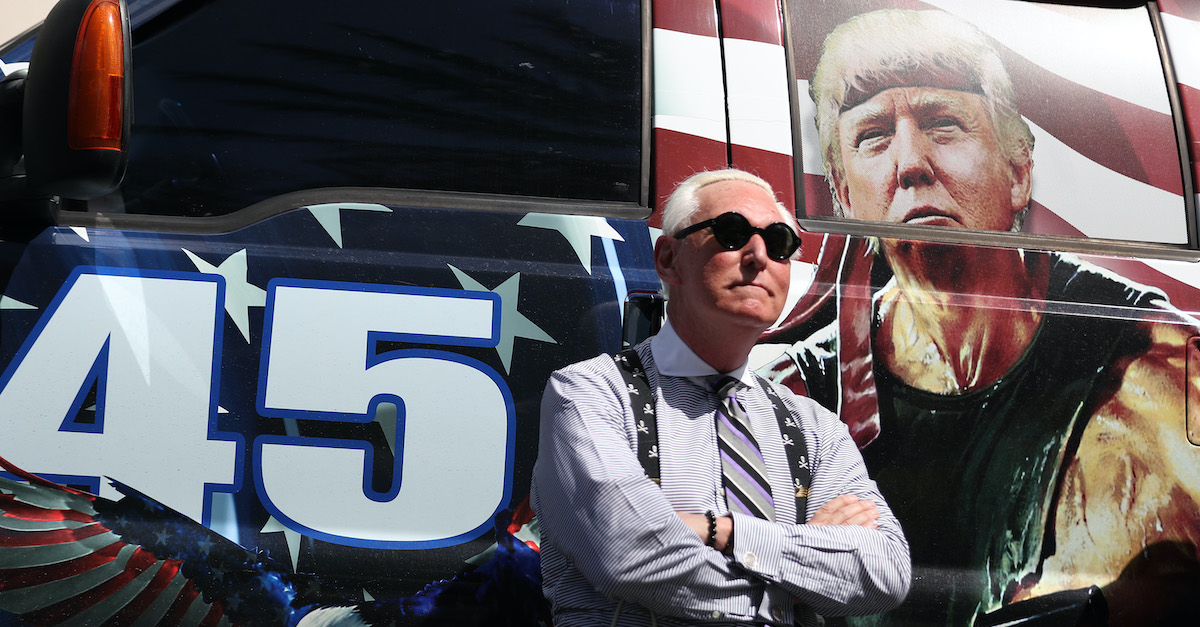 An Oath Keeper seen providing security for former President Donald Trump’s self-proclaimed dirty trickster Roger Stone shouted “All that’s left is the Second Amendment” at an officer at the U.S. Capitol on Jan. 6., federal prosecutors said at a hearing Monday where the militia member was granted bail and forced to surrender his firearms.

Roberto Minuta, the man first identified with Stone outside a Washington hotel by CNN, had been spotted with the Trump operative in photographs and videos flagged by multiple major networks.

“I don’t think it’s frivolous for the government to be seeking detention in a case like this,” Magistrate Judge Andrew E. Krause declared in explaining his ruling, with sets a $150,000, supervision by pretrial services, and travel restrictions in New York and Texas.

“In no way in granting a bail package do I believe these are not serious charges,” he added.

Ultimately, however, the judge found that the dearth of allegations that Minuta committed acts of violence at the Capitol tilted in favor of his pretrial release.

In late February, the Washington Post cited several people familiar with the investigation in reporting that authorities had been probing Stone and InfoWars host Alex Jones as part of a wider examination of the Capitol rioters’ “paths to radicalization.”

In an affidavit supporting Minuta’s criminal complaint, the FBI mentions the suspect’s ties to Stone through New York Times coverage.

“On February 14, 2021, the New York Times published an article, which used open source photographs to track the movements of several individuals wearing Oath Keepers paraphernalia and equipment who attacked the Capitol on January 6, 2021,” the affidavit states, citing a Times article titled, “First They Guarded Roger Stone. Then They Joined the Capitol Attack.” 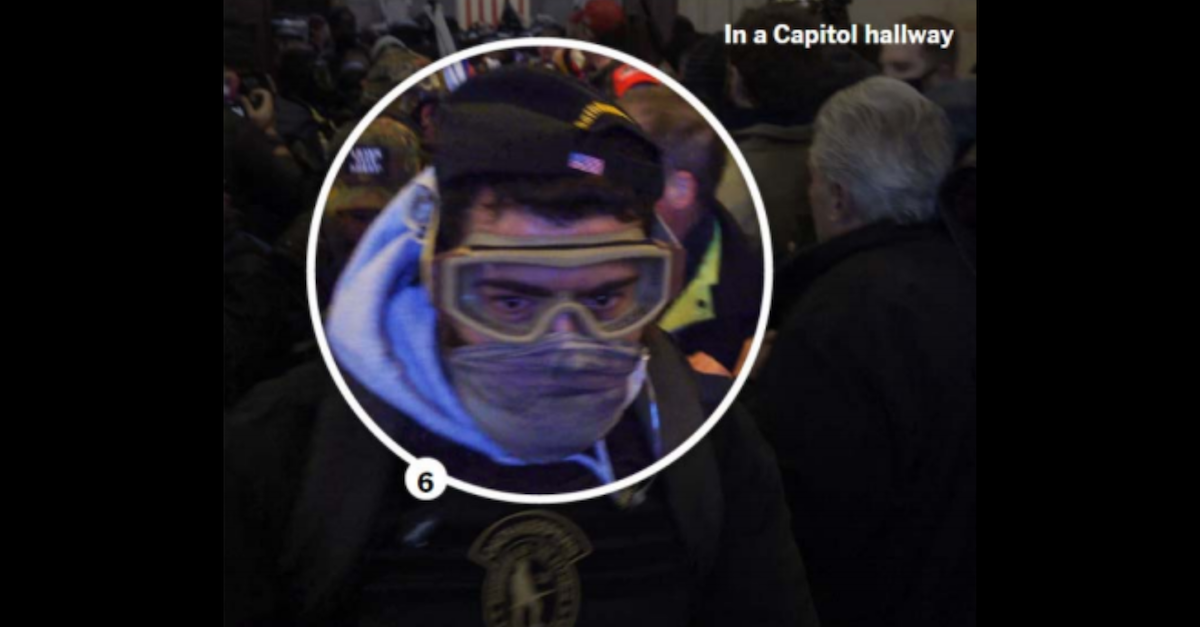 Photo of Robert Minuta embedded in an affidavit supporting his criminal complaint.

Minuta is charged with obstructing an official proceeding, entering a restricted building, and tampering with documents and proceedings.

At a hearing on Monday afternoon, Assistant U.S. Attorney Benjamin Gianforti conceded that Minuta is not accused of acts of violence or illegally possessing firearms.

The prosecutor made a point, however, to flag Minuta’s shout to officers at the entrance of the Capitol: “All that’s left is the Second Amendment!”

Minuta flashed two fingers, in an apparent nod to the right to bear arms, authorities say.

“There’s only one way to read that: “My last resort is guns,'” Gianforti said. 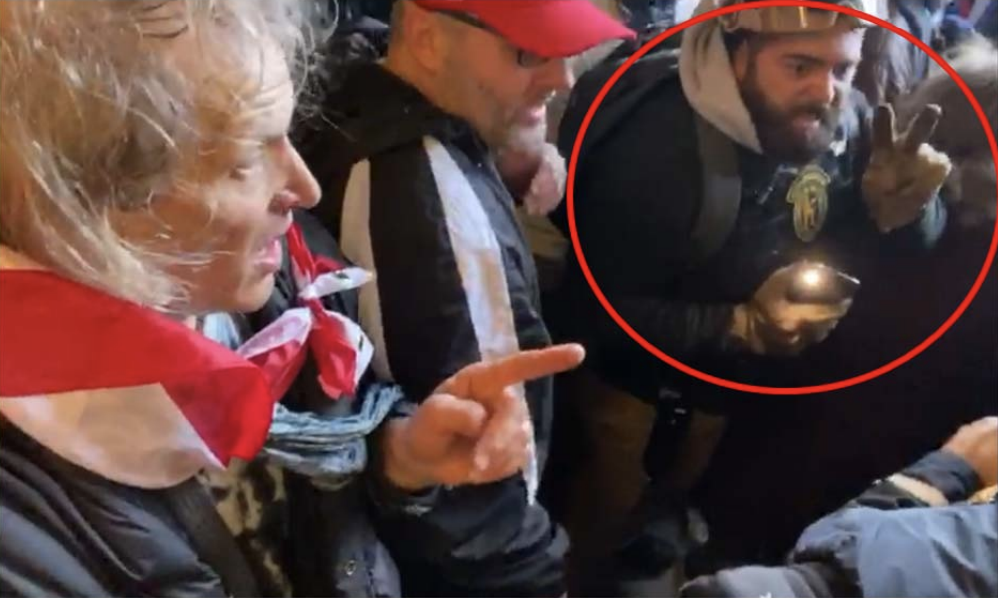 Attorney Ben Gold, from the Federal Defenders office, said that his proximity to people committing violent acts should not keep him behind bars.

“Minuta wore military attire and other apparel, including hard-knuckle tactical gloves, ballistic goggles, a radio with an ear piece, and possibly bear spray,” Esposito wrote in an affidavit, which itemizes all of those items in a chart next to his images. 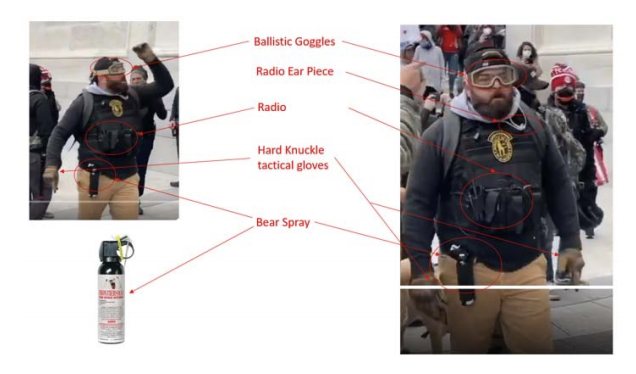 Over in Brooklyn, federal prosecutors announced the arrest and indictment of Isaac Steve Sturgeon, another accused Capitol rioter whom authorities claim went to Kenya on Jan. 24 with a return ticket for April 5. Kenyan authorities deported him in advance of his return date, and he was arrested at JFK International Airport on Saturday afternoon, according to the U.S. Attorney’s office.

At Sturgeon’s initial appearance on Monday afternoon, Assistant U.S. Attorney Tara McGrath said that Sturgeon had a layover in Amsterdam, and he used his itinerary to argue that the Montana resident was a “serious flight risk.”

Sturgeon now faces an eight-count indictment, charging him with assaulting police officers, obstructing justice, and obstructing law enforcement during a civil disorder. Prosecutors say that the 32-year-old Montana resident picked up a metal police barricade, shoved it into officers and crawled under it to enter the Capitol Building, before being fended off by authorities.

“Through tips and open source searches, law enforcement identified several social media accounts associated with Sturgeon, including an Instagram account with several pictures and comments describing the events at the Capitol on January 6, 2021,” FBI agent Julia Chen wrote in an affidavit seeking his removal to Washington, D.C. “One of the photos posted on or about January 6, 2021 showed Sturgeon among other protesters at the Capitol grounds, wearing the same outfit captured on the [body-worn camera] footage.”

The FBI also cited identification from two tipsters who corroborated that he was the man on the police body cameras. One of those people told the bureau that Sturgeon “traveled frequently and had access to numerous weapons,” according to court papers.

“A Facebook account associated with Sturgeon contains a photo, posted on or about November 28, 2020, showing Sturgeon carrying what appears to be a rifle,” the FBI’s affidavit states.

Ashley Burrell, who is representing Sturgeon with the Brooklyn Federal Defenders office, said that her client would be willing to post bond with his $90,000 property in Montana.

“He owns the property outright,” Burrell said, adding that her client has visited Kenya before and likes to travel. “There is no mortgage on it.”