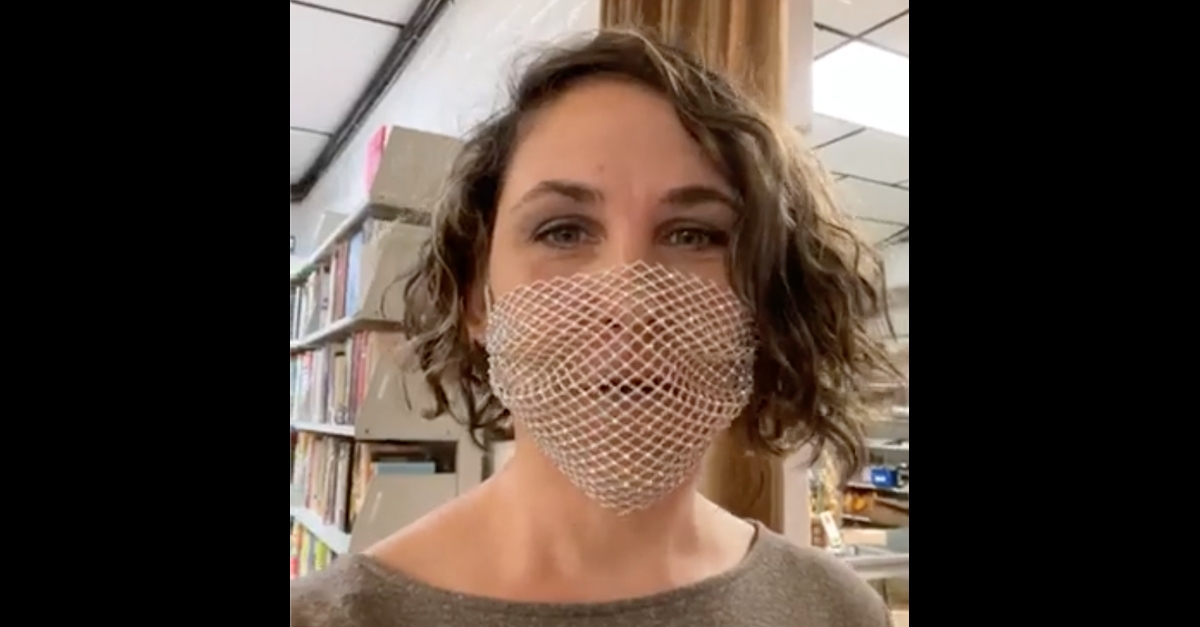 The accused U.S. Capitol rioter known as the “Bullhorn Lady” can now breathe a big sigh of relief—just not in a mesh face mask.

After being released pending trial in connection with the U.S. Capitol riot, Rachel Powell put her freedom in jeopardy by wearing a hole-filled mask inside Mr. Bookman’s, a bookstore in rural Pennsylvania where she works. One of the conditions of Powell’s release set by Chief U.S. District Judge Beryl Howell was to wear a face mask whenever she leaves her residence.

The case then went to Senior Judge Royce Lamberth, who was not amused and ordered her to explain why her bond should not be revoked for flouting court orders. Powell apologized on Monday through her attorney Michael J. Engle, who claimed her client was not trying to mock the court’s order. The attorney depicted the accessory as a sly homage to pop star Lana Del Rey.

Judge Lamberth said that he was “satisfied” by Powell’s apology—and her promise to keep herself masked up properly.

“At this time, [the court] has no reason to believe that her apology is not genuine and that she will not continue to comply with her conditions of pre-trial release,” Lamberth wrote in a two-page ruling on Tuesday. “Nor does the Court believe that defense counsel engaged in any misconduct.”

After Law&Crime first reported on the mask incident, Powell threw away the offending accessory, and she claimed that she was just trying to follow the government’s orders after prosecutors caught wind of it. Her lawyer insisted that there was never any effort to dispose of the evidence, and he submitted letters from members of her church attesting to seeing her wearing opaque masks.

“She acknowledges that wearing it was a poor decision and apologizes for her behavior,” the judge wrote in his ruling.

The judge adds added later: “Counsel represents that he advised defendant to never wear the mesh mask, or any mask like it, ever again.”

Lana Del Rey does not appear anywhere in the two-page order.

The singer indeed controversially wore a mesh mask like the one Powell sported in the since-deleted Facebook video with one key difference: Del Rey’s had clear plastic inside to make it effective.

First arrested in February, Powell was accused by prosecutors of being one of the people who used a large pipe as a makeshift battering ram to break windows at the U.S. Capitol Complex.

Asked about that allegation in an interview with the New Yorker, Powell gave a coy non-answer to reporter Ronan Farrow: “That’s one of those things I can neither confirm nor deny. I just need to talk to an attorney. If you look at that video, people are just going to make their own assumptions.”

The FBI cited the article in the affidavit. Powell’s comments during interviews and on social media suggest that she believed former President Donald Trump’s lies that he won the 2020 election, and the New Yorker reported that she also became interested in COVID-19 conspiracy theories.