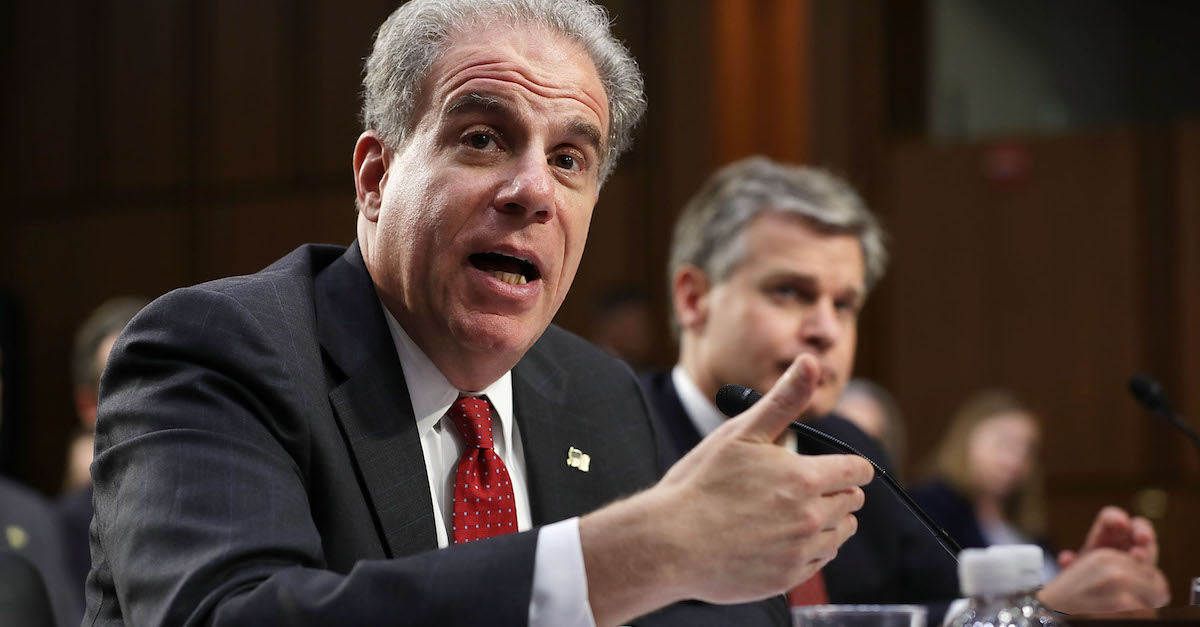 The Department of Justice’s inspector general and three of his fellow watchdogs across the federal government announced on Friday that they will review how their agencies prepared for and responded to the U.S. Capitol siege.

“The DOJ OIG is mindful of the sensitive nature of the ongoing criminal investigations and prosecutions related to the events of January 6,” Inspector General Michael Horowitz wrote in a statement. “Consistent with longstanding OIG practice, in conducting this review, the DOJ OIG will take care to ensure that this review does not interfere with these investigations and prosecutions.”

To be conducted in coordination with watchdogs from the Department of Defense, Department of Homeland Security, and the Department of the Interior, the Justice Department’s inspector general probe will assess what advanced warning the agency and its dozens of components had about the threat before Jan. 6.

Horowitz also wants to probe how much of that information the Justice Department and its components shared information with the U.S. Capitol Police and other federal, state, and local authorities, and the Department’s response to the insurrection.

The Department of Homeland Security’s former Acting Secretary Chad Wolf was in the Middle East on Jan. 6, leaving many to wonder how the leader of an agency created to detect terrorist threats in the wake of the 9/11 attacks could have been abroad on a day when the planned storming of the U.S. Capitol was openly advertised by extremist groups on the internet.

Wolf has since resigned his position, which a federal judge ruled he never lawfully held in the first place.

The watchdog arm of the agency Wolf led without authority says it wants answers.

“DHS OIG’s review will examine the DHS Office of Intelligence & Analysis’s (I&A) responsibility for providing intelligence to law enforcement, and whether and how I&A fulfilled its responsibility,” a press release states. “DHS OIG also anticipates reviewing DHS law enforcement components’ roles, responsibilities, and actions on January 6, 2021. DHS OIG will consider examining other issues that may arise during the course of our review, as appropriate.”

One of outgoing President Donald Trump’s first actions after losing the 2020 election was installing Kash Patel as chief of staff to Acting Secretary of Defense Christopher Miller on Nov. 11, 2020, a fact that raised eyebrows amid reports that the Pentagon delayed activation of the National Guard to back up the outnumbered and overrun U.S. Capitol police force.

The Pentagon’s watchdog also plans to review what happened inside the agency on the day of the worst breach of the U.S. Capitol since the War of 1812. Unlike centuries ago, the building may not have burned, but the work of Congress was disrupted for hours amid rampaging, destruction, and pillaging that left five dead, including a Capitol Police officer.

“Our objective is to determine the DoD’s roles, responsibilities, and actions to prepare for, and respond to, the planned protest and its aftermath at the U.S. Capitol campus on January 6, 2021,” the Pentagon’s inspector general’s office wrote in a statement.

Focus on Patel, the chief of staff for Pentagon’s acting leader, has been growing in the wake of Trump lawyer Rudy Giuliani‘s decision on Friday morning to post screen shots of text messages which appear to highlight conversations between Giuliani and James Sullivan. The screen shots include a first name matching the acting secretary’s, though there is no indication that they refer to the same person.

Giuliani tweeted out someone’s phone number from texts and a reference to “Kash” pic.twitter.com/aaqumQ1aGQ

Speculation swirled after the release of the message because Patel appeared in Trump’s first impeachment report as a figure on the phone with Rudy Giuliani amid a flurry of calls between the former New York City mayor and his indicted associate Lev Parnas on May 10, 2019.

Later that evening, Giuliani appeared on Fox News to describe his pressure campaign against Ukrainian President Volodymyr Zelensky. He told Politico that same day that Zelensky appeared to be “in [the] hands of avowed enemies of Pres[ident] Trump.”

In an interview with CBS in late 2019, Patel denied acting as a backchannel to Trump on Ukraine. The Pentagon did not immediately respond to an email requesting comment Giuliani’s message.