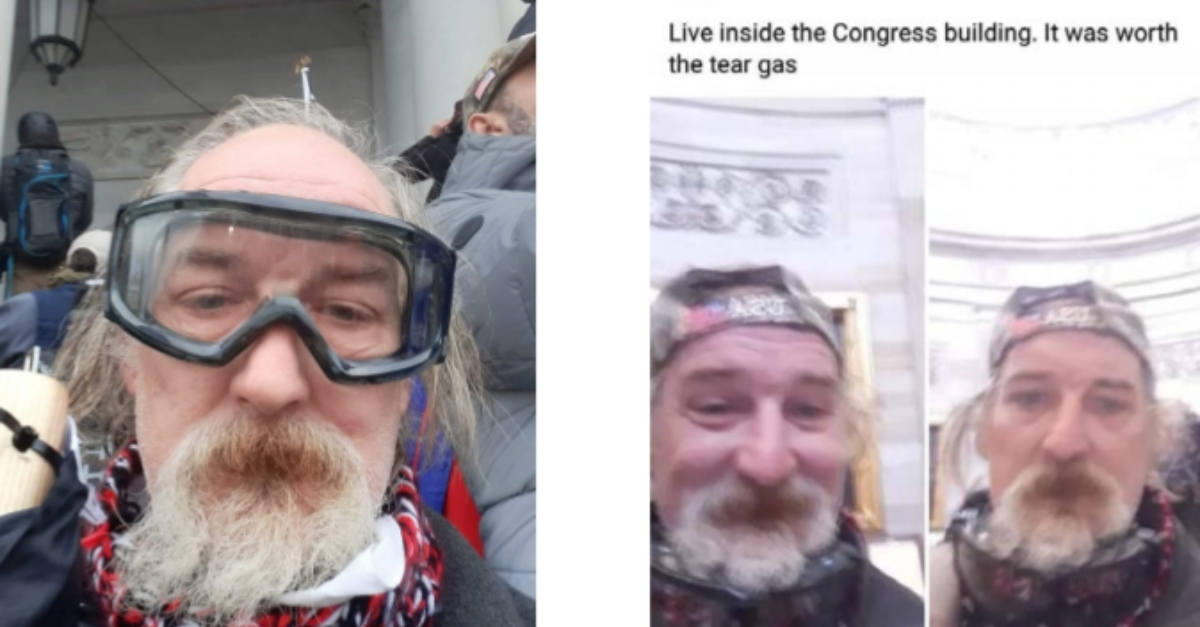 The Federal Bureau of Investigation says the defendant posted pictures to his Facebook account. Investigators said they appeared to be taken from inside the Capitol rotunda.

Supporters of President Donald Trump raided the building on January 6 after Trump continued to claim that he actually won the 2020 presidential election and that it was being stolen from him.  Congress was in the process of counting certified electoral college votes in favor of Joe Biden when the chaos ensued.

Gordon appeared to be a proud participant.

“Live inside the Congress building,” Gordon wrote in screenshots obtained by the FBI. “It was worth the tear gas.”

Additional posts from the Facebook page described being at the U.S. Capitol, including one alleging that at some point officers ushered people into the building and that he was never asked to leave but was limited to the Rotunda area of the building.

Gordon is on the record as saying he was there. He addressed a crowd of 50 people by the Louisiana State Capitol on Saturday, according to a Saturday report in the Baton Rouge, La. Advocate. The FBI noted this article as well as the accompanying pictures that put Gordon in the U.S. Capitol. The photos were captioned “Courtesy of Vaughn Gordon.”

In the actual article, Gordon admitted to being at the Capitol and said he wandered the building for almost two hours. Nonetheless, he insisted he was peaceful, did not engage in any vandalism, and was only driven into the building by tear gas. He acknowledged it was a “riot” but downplayed the his individual and the collective responsibility.

“It was chaos,” he said. “It was mayhem. It was surreal. But I can tell you right now, the rampant destruction and the violence that they’re talking about us is not true.”

Five people died during the insurrection.  Two others — one a defendant, one a Capitol Police officer — died subsequently by reported suicide.

Video and pictures showed rioters fighting officers and smashing windows to get into and through different parts of the building.

The graphic video shows rioters at the Capitol dragging a D.C. Police officer down the stairs, beating, stomping and smashing him with a pole flying the American flag. https://t.co/EmwAUMgaQG

Gordon is charged with knowingly entering or remaining in any restricted building or grounds without lawful authorities and parading, demonstrating, or picketing in the Capitol buildings. He was scheduled for a virtual appearance in the Western District of Louisiana on Friday, and he was released on conditions, the DOJ said.