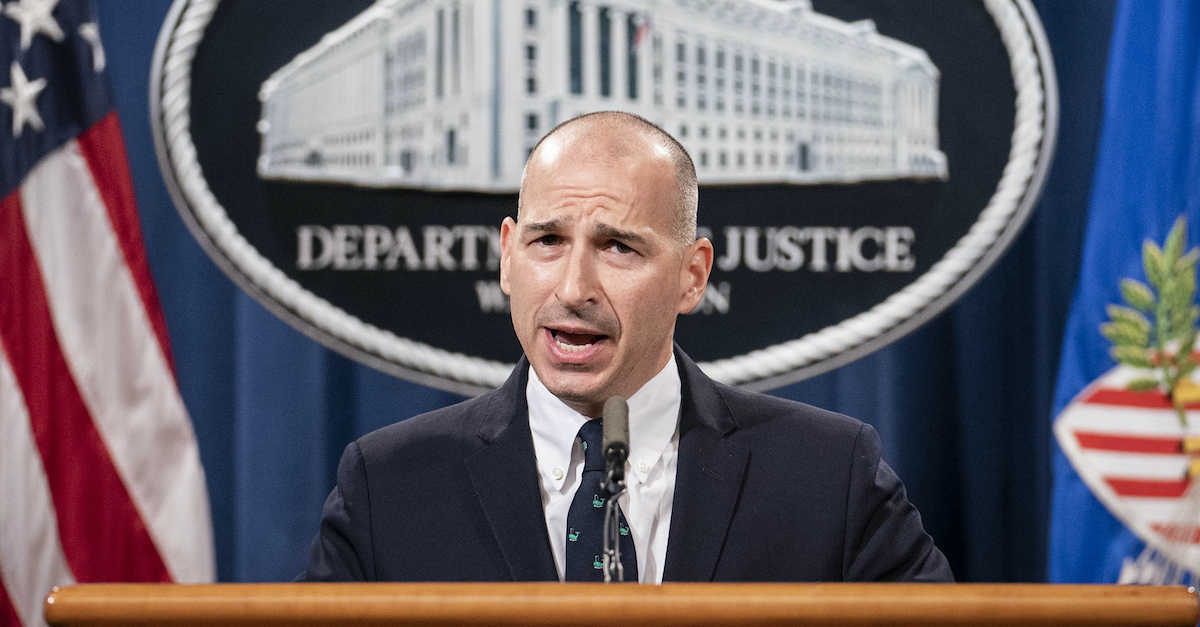 Michael Sherwin, acting U.S. attorney for the District of Columbia, tells reporters that his office has opened more than 170 cases related to the U.S. Capitol siege, at a conference held at the Department of Justice on Jan. 12, 2021.

Unveiling a new sedition “strike force” staffed with national security and public corruption prosecutors, the acting U.S. Attorney for the District of Columbia made clear on Tuesday that the dozens of charges made public six days after the U.S. Capitol insurrection are only a beginning. The FBI has opened more than 160 case files; prosecutors charged more than 70, and both numbers will grow “geometrically,” authorities told reporters on Tuesday.

“We’re looking at everything from simple trespass, to theft of mail, to theft of digital devices inside the Capitol, to assault on local officers, federal officers both outside and inside the Capitol, to the theft of potential national security information or national defense information, to felony murder, or even civil rights, excessive force investigations,” Acting U.S. Attorney Michael Sherwin told reporters in a press conference, adding the more serious charges into the mix later.

On Friday, Steven D’Antuono, the head of the FBI’s Washington Field office, told reporters that “there was no indication” of anything “other than First Amendment-protected activity” on the day of the insurrection, a claim the Washington Post undercut on Tuesday with reporting showing the bureau warned that rioters came ready for “war.”

Walking back his earlier remarks, D’Antuono credited intelligence from the Bureau for the Metropolitan Police’s arrest and charging of Enrique Tarrio, the leader of the extremist Proud Boys group whom authorities found carrying high-capacity magazines into the nation’s capital on Jan. 4, the night before the rallies that preceded the invasion.

“The night before the rally other individuals were identified and other parts of the country, and the travel subsequently disrupted,” he said.

Describing the challenge of distinguishing online “bravado” from actionable threats, D’Antuono said: “As offensive as a statement can be the FBI cannot open an investigation, without a threat of violence or alleged criminal activity.”

“As the days go on, there’s going to be more social media, and people will recognize that in some instances MPD and Capitol Police were in open-handed combat with some of these persons inside the Capitol, where tear gas was used on the Capitol Police and federal officers, and they were also used against some of these rioters,” Sherwin told reporters.

“Their only marching orders from me are to build sedition and conspiracy charges related to the most heinous acts that occurred in the Capitol, and these are significant charges that have felonies with a prison terms of up to 20 years,” Sherwin said. “In addition to that we’re looking and taking priority with cases in which weapons were involved and cases in which destructive devices were involved. As people know through news reports, there were pipe bombs found outside the Capitol, the ATF is working on that. Metro Police is working on that. FBI is working on that, to find that individual individuals who planted those devices.”

Addressing public criticism about the misdemeanor charges that greeted some of the rioters, Sherwin characterized some of these as placeholders for the more serious allegations that followed their investigation. That trend played out on Tuesday, as prosecutors unveiled a 17-count indictment against Lonnie Coffman of Alabama, on whom authorities found 11 Molotov cocktails.