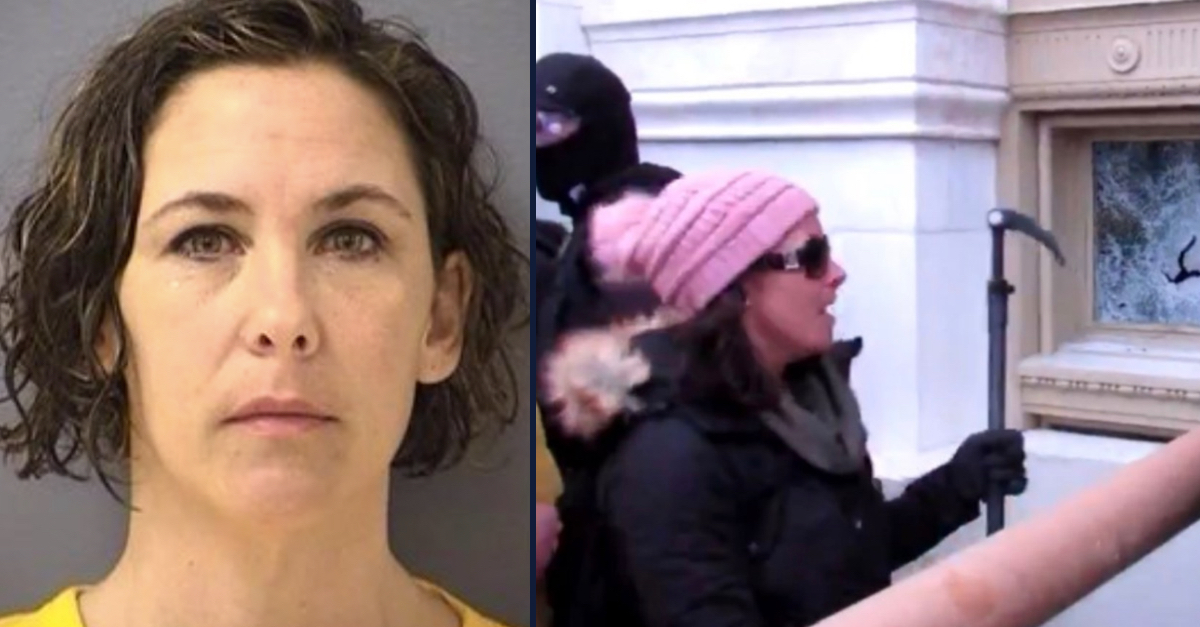 A Pennsylvania woman who allegedly used a bullhorn to share detailed plans of the interior of the U.S. Capitol building on Jan. 6 will not have her pretrial conditions loosened, a federal judge has ruled.

Rachel Powell, 42, had filed a motion asking Senior U.S. District Judge Royce Lamberth to relax the conditions of her pretrial release, which include home detention and location monitoring by way of a GPS ankle bracelet.

Powell is accused of multiple felonies, including obstruction of Congress and destruction of government property, as well as several misdemeanors in connection with the violent Jan. 6 attack on the nation’s Capitol, when a mob of Donald Trump supporters descended on the building in protest of Congress’ pending certification of Joe Biden‘s electoral win. The riot succeeded in stalling the proceeding, forcing lawmakers to evacuate or shelter in place for hours.

Prosecutors say Powell used a bullhorn to share details about the Capitol’s floor plan with rioters who were already inside the building and instructed the group that they “have another window to break.”

Powell was seen using what prosecutors described as an “ice-axe” and a large pipe to break a window.

Since her arrest in February 2021, she has been on home detention, which has allowed her to work 40 hours a week. At a hearing Thursday, Powell argued that her release conditions were far too restrictive, claiming that she was unable to do her job and care for her family.

Powell, who said she works in publishing, told Lamberth that her job requires a flexible schedule and that she has had to leave business events early in order to comply with her nightly curfew.

“It’s just impossible to do my job well,” Powell said.

Powell also said that home detention prevents her from taking her young children, who she said have always been homeschooled, on field trips and other extracurricular activities.

“It’s really detrimental to them and their education with me not being able to take them to their activities,” Powell said, adding that a friend had to take her kids shopping for winter clothing because she wasn’t allowed to leave her home.

Powell said that she missed the birth of a grandchild, another child’s wedding and a funeral. She also said that her living situation requires her to leave her residence in order to care for her sons, who don’t live with her but rather in an “efficiency dwelling” nearby.

Powell said the ankle monitor prohibited her from even crossing the lawn to spend time with her kids.

“I should be able to go check on them,” Powell said, adding that she watches her 6-year-old playing in the yard from inside her house but is barred from going into the yard herself.

“If I could just have this monitor removed, it would make everything better,” Powell said. “It would be better not just for me, but for my children and my job.”

“You are charged with four serious felonies along with other charges,” Lamberth said. “The evidence [suggests] that you actively participated in the assault on the Capitol, including by directing other rioters.”

Although Powell does not have a criminal record and strong ties to her community, Lamberth said that she still could be dangerous, citing her position as a leader of the so-called “Stop the Steal” movement.

“I do not find hat the circumstances you’re now arguing would warrant a change in [release conditions],” Lamberth said.

The judge reminded Powell that her situation was temporary.

Powell had previously drawn Lamberth’s ire by not complying with a court order regarding masking.

Chief U.S. District Judge Beryl A. Howell, who had Powell’s case before it was passed to Lamberth, had in February of 2021 ordered Powell to “wear a mask whenever she leaves her residence.” The next month, Powell posted a video to Facebook showing her wearing a mesh mask. As Law&Crime previously reported, Lamberth declined to jail Powell at that time.

Toward the end of the hearing, Lamberth indicated that he wanted to set a trial date. Powell’s attorney Nicholas Smith pushed back, saying that he already had a full trial calendar through at least the summer and into the fall.

Smith also said he was “seriously disinclined” to go to trial before the House Committee investigating the Jan. 6 attack shared the highly-anticipated transcripts of interviews with the Justice Department, which Smith said could include exculpatory material related to his client.

However, Smith did suggest one possible way of getting the case to trial sooner: Try it in Texas, where Lamberth sits as a visiting judge in the Western District for part of the year.

“Your Honor travels to Texas in September,” Smith said. “If Your Honor is inclined to hold the trial in Texas, I think we could in this case accommodate that and encourage that.”

The suggestion from Smith was notable, as several high-profile Jan. 6 defendants — including members of the Oath Keepers militia group and the Proud Boys — have unsuccessfully pushed for a venue change, arguing that they would not get a fair trial in the District of Columbia, where the attack on the Capitol took place.

Lamberth reminded Smith that while in Texas, he only oversees cases that are filed in that district.

“That’s something we could definitely explore,” Smith maintained, indicating his intent to file a change of venue motion.

Smith also said that he and his client were negotiating possible plea options with the government.

Lamberth set the next status conference in the case for Sept. 12.

[Images via Butler County Prison and via FBI court filing.]