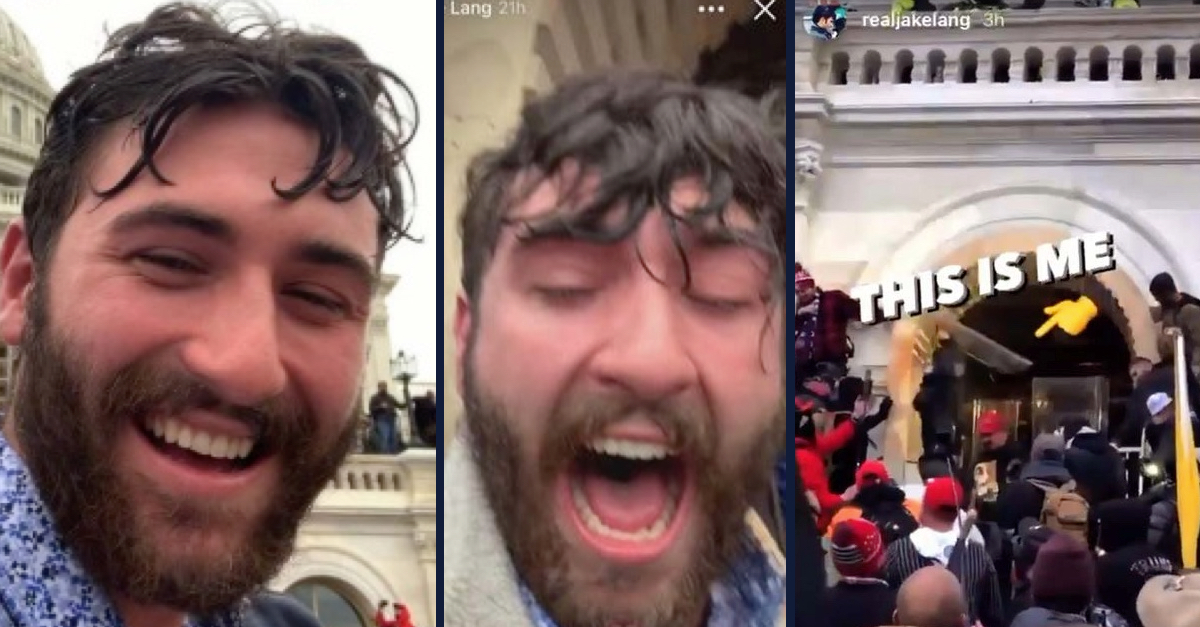 The only federal judge to dismiss a widely-used charge in the Jan. 6 prosecutions has apparently doubled down on his position, again agreeing to dismiss an obstruction charge against a defendant who literally pointed out his own location in the scrum outside the U.S. Capitol building.

“Upon review of the Defendant’s [Motion to Dismiss], and for the reasons discussed in the Court’s [opinions] in United States v. Miller, it is ordered that the Motion is granted,” Nichols wrote in a minute order filed to the federal docket on Tuesday. “It is further ordered that Count Nine is dismissed without prejudice Superseding Indictment [citations omitted].”

According to federal prosecutors, Lang was one of the thousands of Donald Trump supporters that faced off against law enforcement following the former president’s so-called “Stop the Steal” rally on Jan. 6, in which Trump perpetuated the widely debunked conspiracy theory that the 2020 presidential election was stolen from him and handed to Joe Biden.

Lang is allegedly seen on video picking up a police riot shield and slamming it to the ground near law enforcement, according to prosecutors. He is also accused of swinging a baseball bat at police officers multiple times, striking the officers’ shields.

Lang, for his part, seemed proud of his actions, according to court filings.

“This is me,” Lang reportedly posted on Instagram, using an animated finger symbol to point himself out at the front of the crowd facing off against police.

The ninth count in the superseding indictment charged Lang with obstruction of an official proceeding.

The charge carries the stiffest penalty available so far in Jan. 6 cases—up to 20 years in prison; it’s the same potential punishment as the charge of seditious conspiracy that has been filed against Enrique Tarrio and Stewart Rhodes, the leaders of the right-wing extremist groups Proud Boys and Oath Keepers, respectively, along with some of their associates.

Dozens of Jan. 6 defendants have sought to have the charge dismissed, but at least 10 federal judges overseeing Jan. 6 cases in D.C. have allowed the charge to stand.

Nichols, a Trump appointee, has gone the other way.

In his minute order Tuesday, Nichols referred specifically to two rulings in the case of Garret Miller. In addition to allegedly participating in the Jan. 6 attack, the defendant also reportedly threatened to assassinate Rep. Alexandria Ocasio-Cortez (D-N.Y.). Nichols granted Miller’s request to dismiss the obstruction charge in March, finding that the statute applied to actions such as destroying potentially incriminating documents.

The statute, Nichols wrote, “must be interpreted” such that it “requires that the defendant have taken some action with respect to a document, record, or other object in order to corruptly obstruct, impede or influence an official proceeding.”

If someone isn’t accused of taking such action, they can’t be charged with this particular violation, Nichols wrote.

In May, Nichols rejected the DOJ’s request to reconsider that ruling in the Miller case, affirming his stance that a rule of statutory construction that calls for resolution of ambiguity in a statute in favor of a criminal defendant applies in the Jan. 6 cases before him.

Even without the obstruction charge, though, Lang still faces serious charges in connection with his alleged role in the Jan. 6 attack. He’s charged with multiple counts of civil disorder and assaulting, resisting, or impeding law enforcement—both felonies—as well as a handful of trespassing and disorderly conduct misdemeanors.