‘What I Did Was Absolutely Ridiculous’: Man Who Bragged that Jan. 6 Was ‘Proudest’ Day of His Life Gets Jail Time 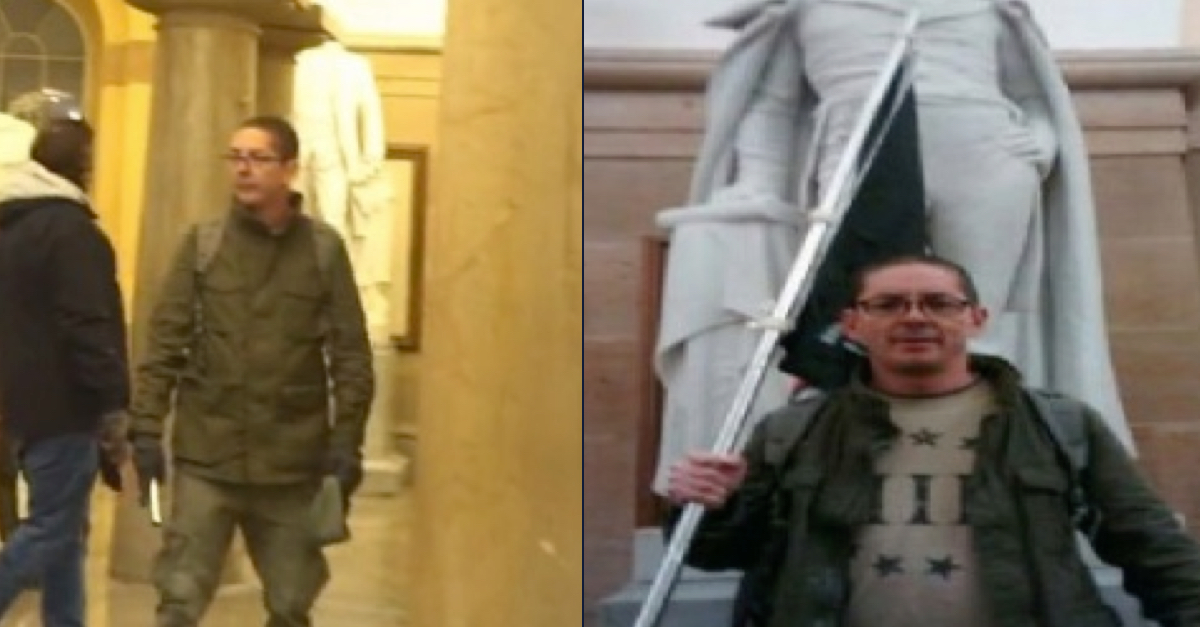 The Texas man who bragged that he was among “the people that helped storm” the U.S. Capitol on Jan. 6 — calling that day one of the “proudest” of his life — has been sentenced to a handful of days in jail.

Sean David Watson, 51, was not among the first wave of Donald Trump supporters to breach the Capitol building that day, although prosecutors say he was close enough to the Senate Wing Door to take a picture of it before it was smashed open. He entered the building at around 2:47 p.m. through the Senate Wing Door, more than 30 minutes after the initial breach. He made his way to the Capitol Crypt and at one point he was pictured holding a flag that appeared to bear the name “Trump” along with the image of the Stars and Stripes. He spent around 35 minutes inside the Capitol before leaving.

He was seen inside the Capitol wearing a sweatshirt that appeared to bear the logo of the so-called “Three Percenters,” an extremist group that bases its name on the false idea that three percent of Americans fought in the Revolutionary War against the British. At Tuesday’s sentencing hearing before U.S. District Judge Amit Mehta, Assistant U.S. Attorney Graciela Lindberg said that the government wasn’t certain whether the sweatshirt Watson was wearing was, in fact, the extremist group’s logo.

“It appears to be the number three,” Lindberg said. “I don’t know if that’s for the Three Percenters.”

One of the most high-profile Jan. 6 defendants, Guy Reffitt, has been linked to the group.

While Watson is not accused of serious felonies like Reffitt, however, prosecutors said his actions in the days and weeks after the Capitol siege are troubling.

According to the government, Watson sent texts, pictures, and videos to people bragging about his participation in the Capitol attack.

“I am fine,” he wrote in a text on Jan. 7. “I was one of the people that helped storm the capitol building and smash out the windows. We made history today. Proudest day of my life!”

Later that day, Watson sent a text telling the recipient that he will share some “videos and pics” when he gets back, presumably home to Texas.

About one month later, on Feb. 5, 2021, Watson gave an interview to a local CBS affiliate in which he admitted to storming the Capitol. He also said that the Capitol Police attacked the rioters, implying that the use of tear gas and other crowd control tactics actually caused the mob to attack law enforcement that day.

“I am actually proud of what I’m doing,” Watson said at the end of that interview, according to the government.

Watson pleaded guilty in April to parading, demonstrating, or picketing in the Capitol building, a misdemeanor punishable by up to six months in jail and a $5,000 fine.

“What I Did Was Absolutely Ridiculous and Completely Stupid.”

Lindberg said that Watson’s post-riot boasts were important to the government’s request for incarceration.

“He misleads others [by claiming] ‘the Capitol Police attacked us,'” Lindberg said. “This disinformation furthers his attack on our democracy, particularly when it’s coming from an Army veteran.”

Lindberg also reminded Mehta that Watson was arrested on Jan. 5 in Washington after confronting Black Lives Matter protesters, although that citation was never pursued.

Watson himself told Mehta, a Barack Obama appointee, that what led him to the Capitol on Jan. 6 was nothing more than “nonsense,” the result of limiting his sources of information.

“I would just like to say that at the time when all this started Jan. 6, I was incredibly wrapped up in this hysteria of this,” Watson said. “I don’t know why I got so caught up in it. I kept myself in this little bubble of news and kept listening and listening and got caught up in this and went to D.C. And when I was there at the Capitol, it was just this hysterical mob.”

Watson, however, didn’t blame the mob.

“Nobody made me go in, I went in on my own, so I can’t blame anybody,” Watson said. “What I did was absolutely ridiculous and completely stupid, and in the 14 months that I’ve bene on pretrial release, I’ve had a lot of time to think about this. I don’t agree with any of the stuff I did back then.”

Watson also noted that calling Jan. 6 the “proudest” day of his life reflects poorly on himself and on the U.S. military.

“I’m incredibly embarrassed by what I did,” he said, later adding that he has “dropped all that political nonsense.”

He says that now he is deeply religious, and even founded a church in his town.

“What I did was wrong,” Watson said. “I repent for what I did. That’s all I can say, Your Honor. I am deeply sorry for my actions.”

“Anytime You Take Somebody’s Liberty Away, It’s Not Something to Be Trifled With.”

In the end, Mehta sentenced Watson to two years of probation and seven days behind bars as a condition of probation. He will get credit for the two days he served at the time of his arrest in April of 2021, so he is expected to serve five days in jail.

The judge told the defendant that he should have gotten the message when he was arrested on Jan. 5.

“That arrest did not deter you,” Mehta said. “It did not cause you to think twice before acting on Jan. 6, and in fact your conduct on Jan. 6 went even further than what you did on Jan. 5.”

Mehta said that it is a judge’s responsibility to try to ensure people respect the rule of law.

“A court of law simply cannot ignore the fact that the arrest didn’t have the impact on you that it should have,” Mehta said. “If I were to give you a period of straight probation, it wouldn’t promote respect for the law. I don’t think it would reflect the seriousness of the offense.”

Mehta said that while he believes Watson is remorseful, his actions on Jan. 6 and the day before warrant punishment.

“I do give you credit, Mr. Watson,” Mehta said. “I think you’re genuine in telling me you have reflected on your conduct and you now understand that what you did that weekend, and what you did that day in particular, was wrong. I believe it’s genuine and the reason this sentence isn’t more severe is because of that.”

Mehta insisted that Watson’s penalty should not be seen as a “slap on the wrist.”

“Some people may think this is symbolic,” the judge said. “It’s not. Anytime you take somebody’s liberty away, it’s not something to be trifled with.”

Last week, Mehta issued the longest sentence so far in Jan. 6 cases: last week, he ordered Thomas Webster, a former NYPD cop whose attack on law enforcement on the Capitol was captured on body-worn camera footage, to serve 10 years in prison.

Pursuant to his plea agreement, Watson will pay $500 in restitution toward the estimated $2.7 million in damage to the Capitol. Mehta also sentenced Watson to 60 hours of community service.