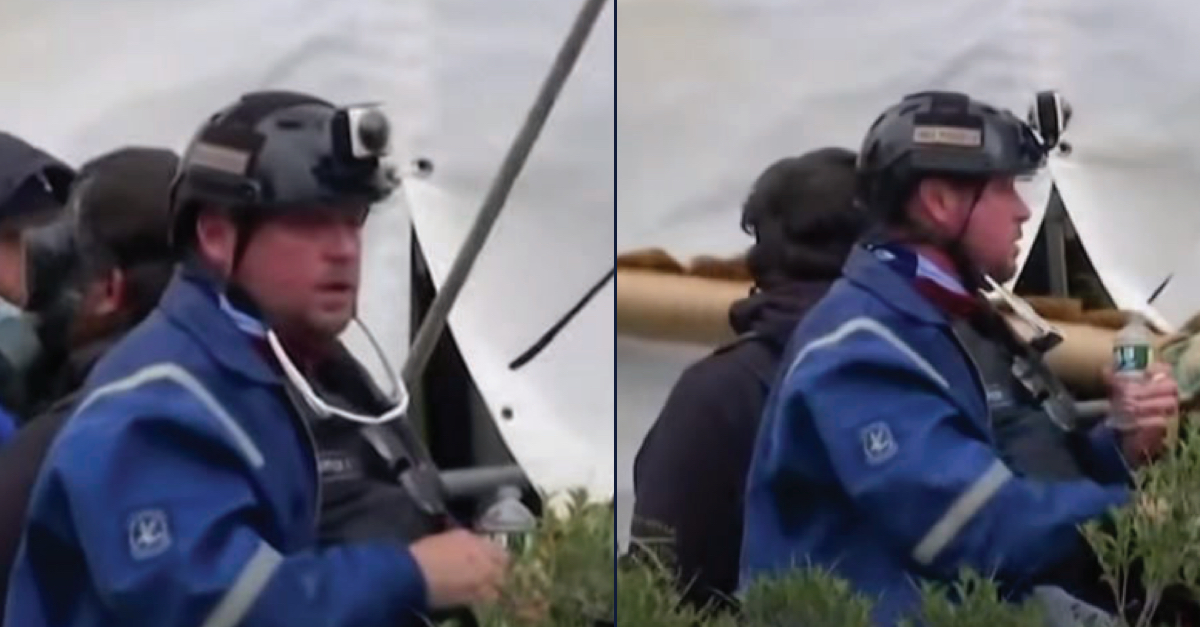 Texas man Guy Reffitt, the first person to be convicted by a jury in connection with the Jan. 6 attack on the U.S. Capitol, will spend more than seven years in prison — the longest sentence issued so far in the Justice Department’s prosecution.

He did not, however, receive a terrorism enhancement requested by federal prosecutors.

Reffitt, a 49-year-old associated with the far-right Three Percenters, was sentenced Monday by U.S. District Judge Dabney Friedrich, who sent Reffitt away for 87 months. The judge tacked on three years of supervised release, and, according to reports, a warning to Reffitt that if he violated any of the terms of his release, he could end up serving years more.

A jury convicted Reffitt in March on five counts, including felony obstruction of an official proceeding of Congress and bringing a gun to the Capitol.

Friedrich’s ultimate sentence is just less than half of the 15 years that prosecutors had requested. The DOJ had sought a terrorism enhancement to Reffitt’s sentence, arguing that Reffitt’s conviction included an offense that “involved, or was intended to promote, a federal crime of terrorism.”

Judge Friedrich, a Donald Trump appointee, did not grant the government’s request; according to reports, she said that doing so would lead to “unwarranted sentencing disparity,” which federal sentencing guidelines are meant to avoid. She also noted that prosecutors hadn’t sought the terrorism enhancements for Jan. 6 defendants who had pleaded guilty to similar actions.

Indeed, Reffitt’s sentence was the first time the DOJ had argued terrorism in requesting an upward variation from federal sentencing guidelines.

Reffitt’s attorney, Clint Broden argued for a downward variance, saying Reffitt’s actions were no worse — and in some cases, significantly less dangerous — than others. Broden pointed out that Reffitt didn’t even breach the building, although Friedrich implied that she thinks he might have, had he not been stopped by a chemical irritant sprayed by police, noting that his body armor had protected him from their rubber bullets.

Matthew M. Graves, the U.S. Attorney for the District of Columbia, said that Reffitt’s actions were extremely serious, noting that the Texas man brought a loaded gun onto Capitol grounds.

“Guy Reffitt came to the Capitol on Jan. 6 armed and determined to instigate violence,” Graves wrote in a statement. “In his own words, his goal was to take the Capitol ‘before the day is over.’ He and others contributed to the many assaults on law enforcement officers that day, putting countless more people — including legislators — at risk. The ‘jury’s verdict and today’s sentence hold him accountable for his violent, unconscionable conduct.'”

After Reffitt’s sentencing, prosecutors released his interview with the FBI on Jan. 16, 2021. According to government’s sentencing memo, Reffitt told an FBI agent that an unregistered silencer found next to his Walther P22 semi-automatic pistol in his home was a “fuel filter.”

“Reffitt’s possession of the unregistered silencer is illegal,” they wrote.

Even though it’s less than half of what prosecutors had wanted, Reffitt’s is the longest sentence so far in the government’s expansive prosecution of Jan. 6 rioters. The records were previously held by Mark K. Ponder and Robert Scott Palmer, who both received sentences of 63 months in prison for assaulting law enforcement. Reffitt was not charged with assaulting police.

Reffitt was among the first to face off against police on Jan. 6, confronting three Capitol Police officers on the west stairs of the Capitol building. At the time, he was wearing a tactical-style helmet and body armor, carrying police-style “flexicuffs,” and armed with a holstered handgun. He rushed the officers, who, according to prosecutors, fired back with “less-than-lethal projectiles before successfully halting his advances with pepper spray.”

Other rioters provided backup to Reffitt, cutting down tarp covering scaffolding in the area, “both to further penetrate into the scaffolding and to use the tarp as a shield to protect Reffitt from additional pepper spray and projectiles.”

Prosecutors said that Reffitt’s confrontation paved the way for other rioters to overwhelm police at a key moment in the siege.

“Before and after being hit with pepper spray, Reffitt encouraged other rioters to charge forward at the officers, which they did both by moving up the stairs and by climbing up through the scaffolding, overwhelming the police officers trying to defend their position on a landing at the top,” the government said in its sentencing memo.

This, according to prosecutors, was part of Reffitt’s plan.

“He played an integral role in overwhelming the officers protecting the building, directly leading to the very first breach of the Capitol building, the evacuation of lawmakers engaged in their duties, and the suspension of the Certification proceeding,” the sentencing memo said.

Reffitt is affiliated with the Three Percenters, a militia group that bases its name on the false belief that the number of Americans who fought in the Revolutionary War amounted to three percent of the population.

Indeed, according to prosecutors, Reffitt seemed prepared for a violent and bloody revolt on Jan. 6, as lawmakers in the Capitol had begun to certify Joe Biden‘s win in the 2020 presidential election.

A camera affixed to his tactical helmet captured some of his words that day, including a graphic description of what he hoped would happen to House Speaker Nancy Pelosi (D-Calif.):

• We’re taking the Capitol before the day is over.
• We’re going for the Capitol before the day’s over with, everybody’s coming out kicking and fucking screaming. Fuck ’em.
• I’m taking the Capitol with everybody fucking else. We’re all going to drag them mother fuckers out kicking and screaming, I don’t give a shit. I just want to see Pelosi’s head hit every fucking stair on the way out. (Inaudible) Fuck yeah. And Mitch McConnell too. Fuck ’em all. They fucked us too many goddamn years for too fucking long. It’s time to take our country back. I think everybody’s on the same damn wavelength. And I think we have the numbers to make it happen.
• I’m packing heat and I’m going to get more heat, and I am going to that fucking building and I am dragging them the fuck out.
• Grab ’em by the ankle and drag ’em, let their heads hit the steps all the way down. Fuck ’em, every one of ’em’s coming out. I don’t give a shit. I like Ted Cruz. He’s still a goddamn politician. They are all coming out. We’ll start over. We own this motherfucker. We’ll start over.
• Whatever it takes to get ’em out of that building, and empty it out, and put us in that motherfucker.

Reffitt’s participation in the Jan. 6 Capitol riot was flagged to the FBI by his son, Jackson Reffitt. While Jackson testified against his father at trial, he reportedly did not make any in-person statements at his father’s sentencing, but instead submitted a letter to serve as his victim impact statement.

In the days after Jan. 6, having returned to Texas, Reffitt warned his children against telling the FBI where he was that day, telling them that “traitors get shot.” Friedrich said these threats were “highly disturbing,” as were his efforts to get his fellow Three Percenters to delete their messages after Jan. 6.

“Under no legitimate definition of the word patriot does what Mr. Reffitt did on Jan. 6 fit the term,” Friedrich said, according to WUSA reporter Jordan Fischer. “What he and other rioters did was the antithesis of patriotism.”