‘We Are in the Capitol, Baby!’: Infowars Video Editor Who Claimed Proximity to Ashli Babbitt Shooting Death Pleads Guilty in Jan. 6 Capitol Breach 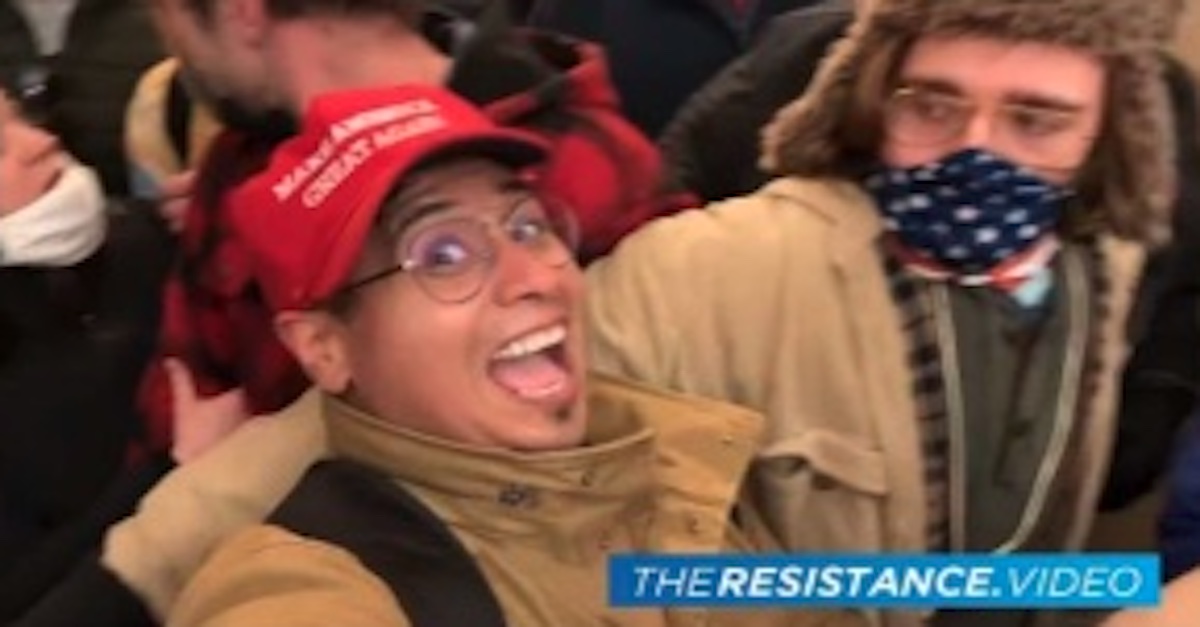 A 37-year-old defendant and video editor associated with Infowars, the website owned by right-wing conspiracy theorist Alex Jones, has admitted to illegally entering the U.S. Capitol building on Jan. 6.

Samuel Christopher Montoya pleaded guilty on Monday to a single count of parading, demonstrating, and picketing in a Capitol building, a misdemeanor punishable by up to six months in jail and a $5,000 fine.

At Monday’s hearing before Senior U.S. District Judge John D. Bates, Montoya admitted to entering the Capitol through the Senate Wing Door at approximately 2:18 p.m., minutes after the building was initially breached by Donald Trump supporters angry over their preferred candidate’s loss to Joe Biden in the 2020 presidential election. The riot forced Congress to temporarily pause its certification of the Electoral College vote and drove lawmakers and staff to either evacuate or shelter in place until the chaos subsided.

Prosecutors say that Montoya recorded a nearly 45-minute long video documenting his time inside the Capitol until he was eventually ushered out by law enforcement officers shortly before 3:00 p.m.

According to prosecutors, Infowars host Owen Shroyer, who has also been charged with breaching the building that day, featured Montoya on his show on Jan. 8, 2021 in a video titled “EYE WITNESS ACCOUNT OF ASHLI BABBITT’S EXECUTION.” Montoya is identified as “Sam” and credited as a “Video Editor” for Infowars. Prosecutors say he described hearing the gunshot that he believes killed Ashli Babbitt, a Trump supporter who was shot to death as she climbed the door outside the Speaker’s Lobby.

“[Montoya] describes to Shroyer hearing the gunshot and his recollections of the scene of the shooting,” prosecutors said in a court filing. “His ‘exclusive’ footage that is played features his same voice narrating as in the 44-minute video, and appears to depict activity by the Speaker’s Lobby sometime after the conclusion of his 44-minute video.”

Montoya allegedly appeared in at least two more Infowars interviews after that, according to prosecutors.

In an affidavit attached to the criminal complaint, federal investigators seemed skeptical of Montoya’s apparent claims that he was acting as a journalist while at the Capitol on Jan. 6.

“At times during the video, Montoya describes himself to others inside the Capitol Building as a ‘reporter’ or ‘journalist’ as he attempts to get through crowds,” the affidavit says. “The director of the Congressional press galleries within the Senate Press office did a name check on Samuel Christopher Montoya and confirmed that no one by that name has Congressional press credentials as an individual or via any other organizations.”

On Monday, Montoya’s colloquy with Bates, a George W. Bush appointee, was fairly straightforward. Montoya didn’t hesitate or challenge the government’s account according to the Statement of Offense, which quoted Montoya celebrating that he literally “stormed” the building.

“We are in the Capitol, baby!” he also said, according to court documents.

When Bates asked Montoya if the Statement of Offense, read aloud in part by prosecutor Alexis Loeb, was “true and correct,” Montoya said that it was.

“And you did in fact do what the government stated it could prove at trial?” the judge asked.

“Are you entering this plea of guilty because you are guilty and for no other reason?” Bates later asked the defendant.