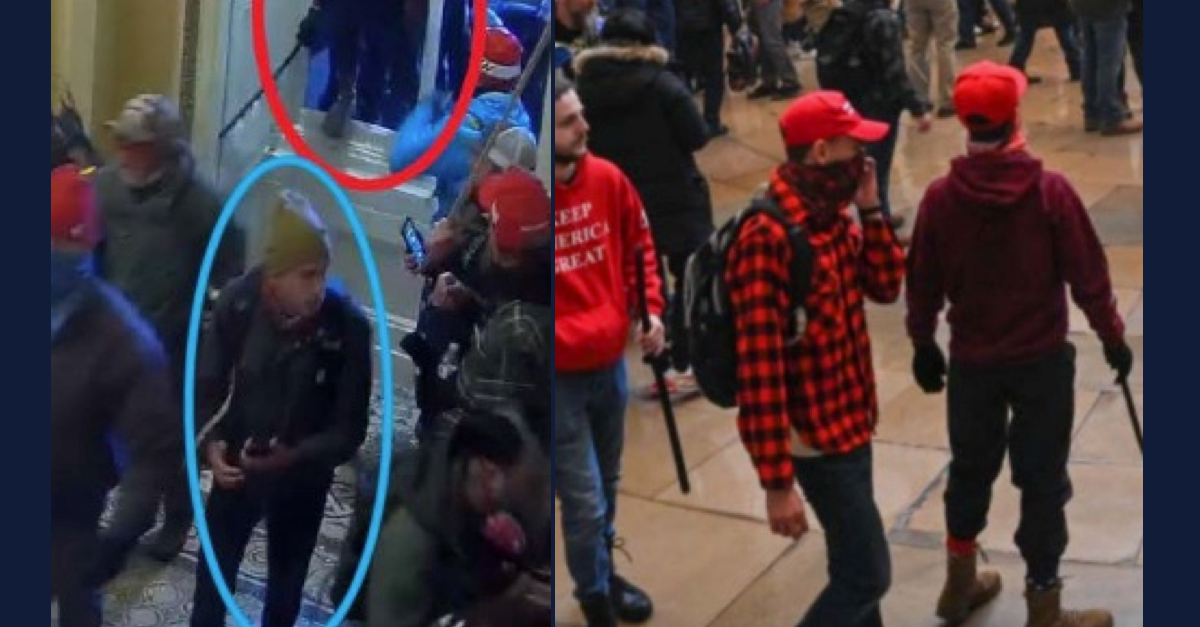 Elliot Bishai in the Capitol on Jan. 6. (Images via FBI court filings.)

A South Carolina firefighter who joined the mob of Donald Trump supporters at the U.S. Capitol on Jan. 6, shouting “Let’s go!” and “Civil war two!” before entering the building through a broken window has been sentenced to two weeks in jail.

Elliot Bishai, 22, had pleaded guilty in April to one misdemeanor count of entering and remaining in a restricted building or grounds, which carries a potential maximum sentence of one year in jail and $100,000 fine.

He admitted to driving with friends to Washington, D.C. from South Carolina to attend Trump’s so-called “Stop the Steal” rally. He then headed over to the Capitol, joining the scores of Trump supporters looking to stop Congress from certifying Joe Biden’s 2020 electoral win. Bishai entered the building through a broken window and stayed inside for nearly 30 minutes, at one point entering a Senate conference room that is considered a sensitive area.

In his sentencing memorandum, Bishai said that he didn’t remember yelling “Civil war two!” while outside the Capitol until prosecutors reminded him with audio and video footage showing him doing it.

Prosecutor Grace Albinson pushed back on this claim, indicating that Bishai’s explanation was not entirely believable, considering that he had more than 400 videos on his phone from Paul Miller, a right-wing white supremacist who used the online moniker “GypsyCrusader” to push for a race-based second civil war.

Prosecutors also noted that Bishai’s phone contained “over 80 images that reflect Nazi and white supremacist ideologies.” Bishai told investigators that he had such images and videos because he thought they were funny, and not because he agreed with the content. He also said that he never shared the images publicly.

The DOJ had asked for a sentence of 30 days in jail followed by one year of supervised release along with 60 hours of community service. Pursuant to his plea agreement, Bishai will pay $500 in restitution toward the estimated $2.7 million in damage to the Capitol.

Bishai, who was 20 at the time of the siege, had requested a sentence of probation only.

Bishai’s lawyer, Donald M. Brown, Jr., had argued that the young man had “already paid dearly for his actions” and that putting him in jail “would not serve the best interest” of either Bishai or the government.

“Defendant has already lost an opportunity to serve the United States Army as a pilot in the Army Warrant Officer Flight Program,” Bishai’s sentencing memo said. “That has been Elliot’s lifelong dream and his actions have already cost him dearly. Additionally, Elliot has also had his student pilot’s license revoked by the Federal Aviation Administration, in conjunction with the Transportation Safety Administration.”

Bishai, a traveling firefighter, had served in the United States Civilian Air Patrol, a federally-supported public entity affiliated with the U.S. Air Force.

At Friday’s sentencing before U.S. District Judge Tanya Chutkan, Brown noted that Bishai’s job “will be waiting for him” when he gets out of jail.

During the hearing, Bishai offered some brief remarks on his own behalf.

“I heard your remorse, I heard your apology,” she said. “I hear many many apologies. What strikes me in so many of these cases is the lack of acknowledgment of the terror inflicted on the people who were doing their jobs that day.”

Chutkan said that the Capitol building is “full of patriots” who “want to serve their country” and do so under difficult circumstances.

“I haven’t heard a lot of acknowledgment and compassion and sympathy for the people who were terrified, crying, hiding under their desks, calling their children, worrying about not being able to see them again,” Chutkan said, referring to lawmakers and Capitol staffers who were forced to either evacuate or shelter in place as the mob breached the building.

“While I’m sure you wish none of this had ever happened, I wonder how much of that is because of what has happened to you,” she told Bishai.

Chutkan also pointed out what she saw was the irony of Bishai benefitting from the very system the mob so violently railed against on Jan. 6.

“I think it’s ironic, Mr. Bishai,” Chutkan said. “I believe strongly that you have gotten every single benefit of presumption of innocence, the criminal justice system, and the rule of law in this country.”

“I can tell you this as an immigrant: I don’t know of any place that does it better,” the Jamaican-born judge continued, perhaps also nodding to the fact that Bishai is the son of an immigrant of Egyptian and Sudanese descent.

“That whole system you wanted to tear down on Jan. 6 has given you all the presumptions and rights that you are entitled to under the same constitution that you ignored that day,” Chutkan added. “I hope that’s not lost on you.”

Calling Bishai’s apparent desire to go into military service a “double-edged sword,” Chutkan said that the fact that he would take an oath to defend the country and then join the Jan. 6 mob “boggles the mind.”

“You need to consider how you could have done what you did and how you square that with your desire to serve this country,” she added. “I don’t understand how you looked those officers in the eye and did what you did.”

The judge had encouraging words for Bishai after announcing her sentence, telling him that she believes that “we are not the worst thing we’ve ever done” and that he still has a chance for a good future. She noted that, unlike many of the defendants who have appeared before her, Bishai has the support of a loving family and an opportunity to move forward with his life.

“You made a serious error in judgment, but more importantly, you’re still young,” Chutkan said, “I want you to reexamine the motivations that caused you to do what you did. Your political beliefs are entirely your own, but you may want to consider getting your information from a variety of sources in the future.”