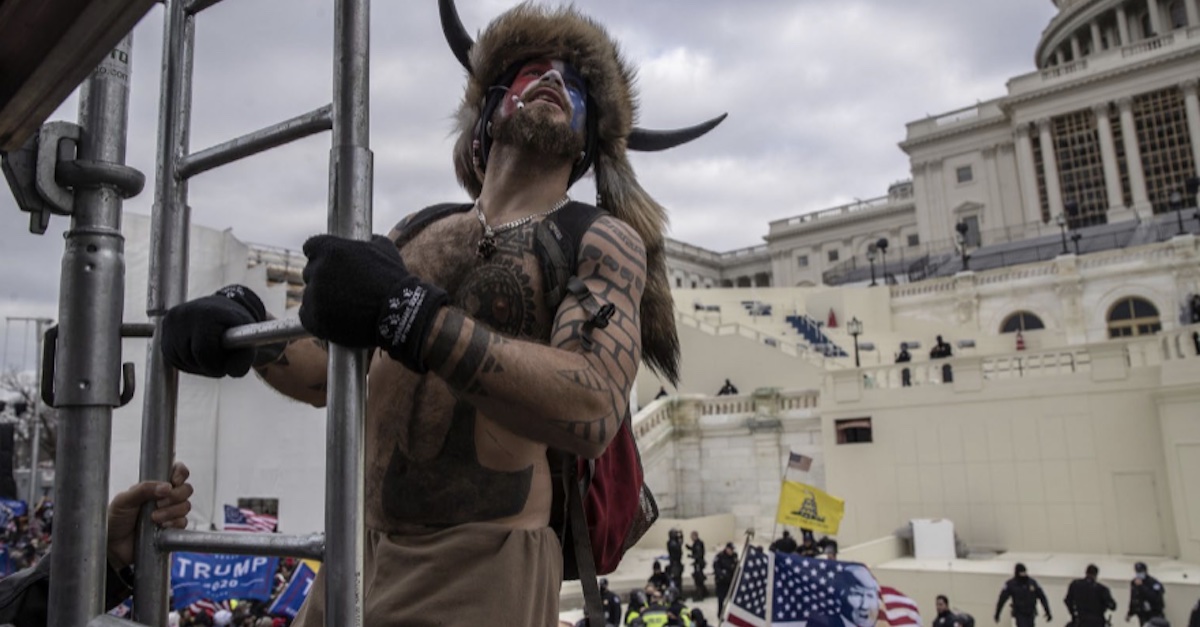 Federal prosecutors filed a sentencing memorandum on Tuesday calling for a federal judge to sentence Jacob Chansley to 51 months behind bars for his role on Jan. 6 in derailing the counting of the Electoral College votes that President Joe Biden won.

While Chansley lawyer Al Watkins began his bid for sentencing leniency on Tuesday with a quote from Forrest Gump, the government began its sentencing memo with the “prayer” Chansley uttered inside the Capitol:

“Thank you Heavenly Father for gracing us with this opportunity…to allow us to send a message to all the tyrants, the communists, and the globalists, that this is our nation, not theirs. That we will not allow America, the American way of the United States of America to go down…Thank you for filling this chamber with Patriots that love you… Thank you for allowing the United States of America to be reborn. Thank you for allowing us to get rid of the communists, the globalists, and the traitors within our government.

– Defendant Jacob Chansley, January 6, 2021, on the Senate Dais inside the U.S. Capitol, to rioters gathered in the Senate chamber.

Prosecutors said that Chansley was “among the first 30 rioters inside the U.S. Capitol building on that day” and could be heard saying things that were decidedly not prayerful, such as “time’s up motherfuckers” and “Mike Pence is a fucking traitor”:

Instead of obeying the instructions of the U.S. Capitol Police to leave the building, the defendant traversed another staircase to the third floor of the Senate side of the U.S. Capitol building. At approximately 2:52 p.m., the defendant entered the Gallery of the Senate alone. The defendant then proceeded to scream obscenities in the Gallery, including “time’s up motherfuckers,” while other rioters flooded the Chamber below.

The defendant then scaled the Senate dais, taking the seat that Vice President Mike Pence had occupied less than an hour before.8 The defendant proceeded to take pictures of himself on the dais and refused to vacate the seat when Officer K. R., the lone law enforcement officer in the Chamber at the time, asked him to do so. Instead, the defendant stated that “Mike Pence is a fucking traitor” and wrote a note on available paper on the dais, stating “It’s Only A Matter of Time. Justice Is Coming!”

The government also rubbished the idea that Chansley merely walked through open doors that day and engaged in a “peaceful” demonstration:

The government cannot overstate the seriousness of the defendant’s conduct as a one of the most prominent figures of the historic riot on the Capitol on January 6, 2021. Armed with a six-foot long spear, the defendant brazenly marched past dozens of law enforcement officers, with rioters throwing debris of all kind at those who opposed them, past broken windows and through doors ringing with alarm bells. The defendant was among the first 30 rioters to penetrate the U.S. Capitol building. The defendant then stalked the hallowed halls of the building, riling up other members of the mob with his screaming obscenities about our nation’s lawmakers, and flouting the “opportunity” to rid our government of those he has long considered to be traitors. All of this took place mere minutes after the Vice President of the United States was evacuated from the Senate Chamber. The defendant’s consistent argument throughout this case that his actions on that day were peaceful is undermined by the evidence submitted to this Court, but demonstrative of a persistent mindset that could lead the defendant to commit similar acts again.

The defendant’s statements before, during, and after the January 6th riot are also concerning. The defendant, like every other person in this country, has the right to peaceably assemble and protest. What he cannot do, as this Court has noted, is storm into the U.S. Capitol building during a joint session of Congress to stop Congress from certifying the results of a lawful election. His words, taken in the context of his actions that day, undermine any suggestion that the defendant breached the U.S. Capitol merely to engage in peaceful, political commentary on the Senate dais.

The government calculated Chansley’s sentencing range between 41 and 51 months in prison. The defense called for a term “significantly below” that, but the prosecution is asking for 51 months (four years and three months) in prison, plus three years of supervised release, and $2,000 in restitution.

Chansley, who pleaded guilty in September to one count for obstructing an official proceeding, attempted to distance himself from the “QAnon Shaman” moniker. But Senior Judge Royce Lamberth said it was true that Chansley was a “mascot” for QAnon and refused to let Chansley out of jail ahead of his Nov. 17 sentencing. Prosecutors asked the judge to send a message to Chansley and any person who might try to “emulate” him.

“The sentence of this Court must drive home this fact for this defendant, and any others who may wish to emulate him: crimes committed against this country and democracy will be prosecuted and punished in accordance with the law. The government asks for such a sentence here,” the memo concluded. “The government submits that such a sentence would be an appropriate one, which would serve to protect the community, punish the defendant for his criminal conduct, and deter others from committing similar offenses.”

“Finally, the government argues that a sentence of less than 51 months of incarceration would be insufficient to impress upon the defendant the seriousness of his actions and ensure the safety of the nation,” prosecutors said.