QAnon Shaman’s Mom Goes to Bat for Her Son: ‘He Walked Through Open Doors’ 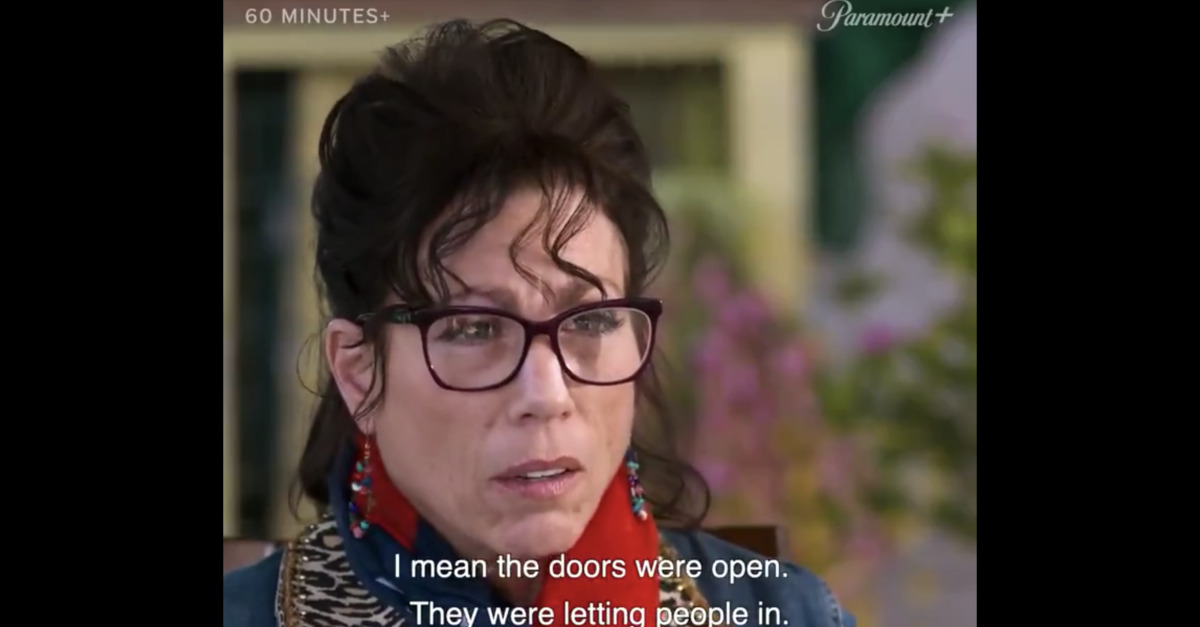 The mother of Jacob Chansley, the man dubbed “QAnon Shaman” by various media outlets due to his photogenic face paint and Nordic-looking getup worn during the Jan. 6 siege of the U.S. Capitol Complex, really loves her son. So much so that Martha Chansley recently gave an interview to 60 Minutes+ defending his actions in whole—and the underlying conspiracy theory behind them.

“Do you see anything wrong with what your son did?” host Laurie Segall asks during one segment being shared on social media.

The mother was angrily bemused.

“What do you mean by ‘wrong’?” she asked. “What, like, wrong—he didn’t. He was—he went through open doors.”

“He was escorted into the Senate,” Chansley continued. “So, I don’t know what’s wrong with that.”

“This was an attack on the U.S. Capitol,” Segall explained. “And your son was a part of it. Whether or not you say he was violent, do you see the gravity of it?”

The elder Chansley replied in the affirmative but not for reasons that have anything to do with popular myth-making about the building’s significance as a “temple” of Democracy or notions about the legislative seat of government’s allegedly “sacred” nature. Rather, she cites the fully-felt fact of her son’s incarceration.

“Of course,” she said. “Of course. I feel the gravity of it because my son is—you know, he’s—he’s where he is right now, so.”

The interview then cuts to Chansley insisting that her son is remorseful for what he did.

“I know that he’s sorry,” she tells the interviewer. “But again, it all comes back to—he walked through open doors.”

Segall presses back on the open doors line of argument.

“Did it look like the doors were just peacefully open to the public?”

Chansley pushes back against the frame—noting that the qualifier “peacefully” isn’t commonly associated with the word “doors.”

“Why the word ‘peacefully?'” she asks. “I mean the doors were open. They were letting people in.”

The host does some pushing back of her own.

“They were overcome by a group of people, many of whom were armed,” she says.

Both versions of the story have some truth to them.

Videos of the pro-Trump insurrection shared on social media—and now being cited in hundreds of federal cases against the alleged rioters—show hundreds of people easily breezing past D.C. Metro and Capitol Police as they made their way into the halls of government. Questions have been raised as to why the mob had it so good by commentators, critics, and multiple members of Congress.

Several initial videos suggested that some police officers resigned themselves to the situation, permitted the mob to advance, or even made friendly, approving gestures with the insurrectionists. In the aftermath of the incident, two officers were suspended and one was arrested for their interactions with the 45th president’s supporters. Many other officers, however, were simply overwhelmed and, given the size of the threat, had little to rely on in terms of immediate backup—leading to congressional inquiries and shocking revelations.

Regardless of the role played by law enforcement, there’s no disputing the armed nature of the roving pro-Trump legions on that fateful day. Multiple individuals came with weapons.

But, Chansley’s mother said, her son wasn’t one of those people.

“Jacob wasn’t a part of that,” she insisted.

The government, on the other hand, begs to differ. In an initial appearance hearing, prosecutors claimed that Chansley was outfitted with a “spear.” In a recent bail motion, Chansley’s defense claimed that he did not have a spear but, rather, a flag pole containing a decoration known as a finial that only makes the pole look like a spear.

That issue is currently taking up a bit of the docket’s oxygen. The government recently responded to Chansley’s proposed motion for bail by arguing against it. On Thursday, the defense responded to the government’s response. Chansley’s bail hearing is scheduled for March 5, 2020.

The host then characterized the mother’s defense of her son as follows: “My son was there, but he wasn’t a part of the bad part of it.”

The mother agreed, arguing that her son was simply engaged in acts of “free speech” and “to stand up for what you believe is right.”

Segall pointed out that trespassing and interrupting the U.S. Congress are not rights to which anyone is entitled.

To which the mother responded: “What I would say to that is, I don’t think it’s right that it was won fraudulently.”

Court documents on file in most, if not all, of the hundreds of cases piling up in connection with the siege note that the Capitol Building and surrounding grounds were closed to visitors on Jan. 6 due to the gravity of the events scheduled to unfold that day.