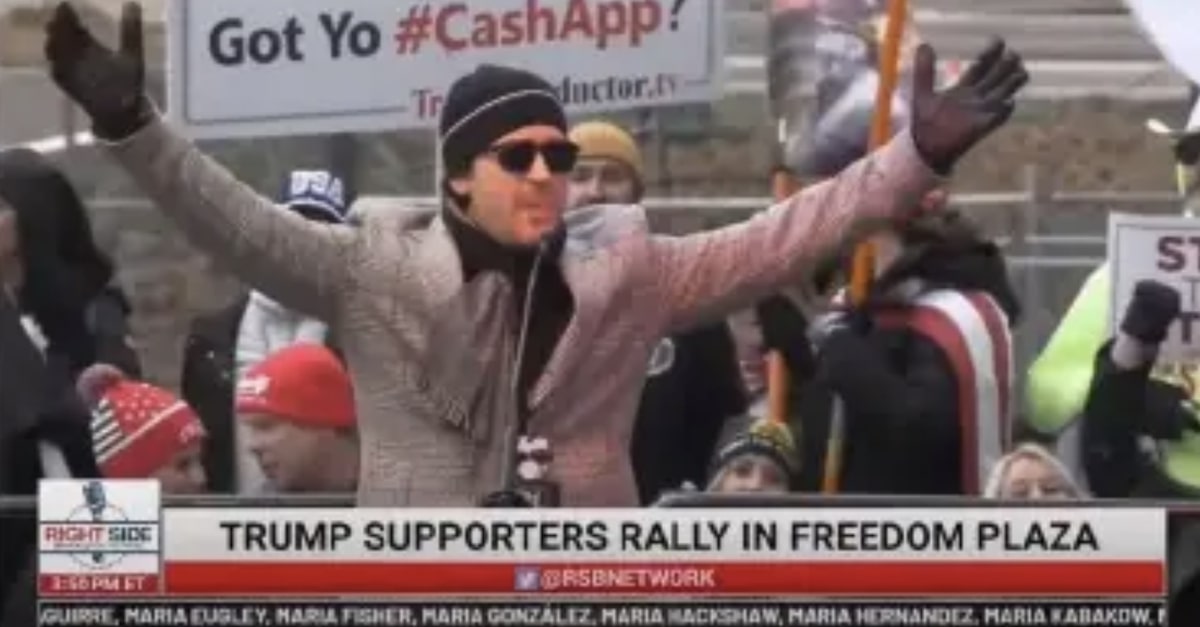 Brandon Straka, a prominent Donald Trump ally and founder of the so-called “WalkAway Campaign” who egged on Jan. 6 rioters and told them to “hold the line,” has been sentenced to three years of probation, including three months of home detention.

Prosecutors say that Straka was a powerful and influential voice outside the Capitol on Jan. 6, as hundreds of Trump supporters overran police in an effort to stop Congress from certifying Joe Biden’s win in the 2020 presidential election.

According to prosecutors, Straka used his “significant public profile” to promote his activity on Jan. 6, and went to join the riots after having learned the Capitol building had been breached, encouraging others to do the same. He also recorded video of rioters entering the Capitol and encouraged them to take a police officer’s shield.

“Patriots at the Capitol- HOLD. THE. LINE!!!!” Straka tweeted at around 5:30 p.m., as police were still working to clear rioters from the Capitol grounds, the government says.

However, Straka never entered the Capitol building, like so many other Jan. 6 defendants.

He pleaded guilty in October to one count of disorderly conduct in the Capitol building or grounds. Under that plea agreement Straka cooperated with investigators, and met with law enforcement officials at least three times.

At the hearing, Assistant U.S. Attorney Brittany Reed said that the fact that the government let Straka plead to a misdemeanor shouldn’t mean his crime wasn’t serious.

“Something should have registered inside Mr. Straka” when he was outside the Capitol, where he saw rioters fight a police officer for his shield. He should have used his significant influence to discourage, not condone, what was happening at the Capitol.

U.S. District Judge Dabney Friedrich, a Trump appointee, said that Straka’s comments and posts “are not specifically advocating violence in the same way” as other Jan. 6 defendants.

“I’m very concerned about that line, and where it should be drawn,” Friedrich told Reed.

Straka’s lawyer, Bilal Essayli, echoed what he said in Straka’s sentencing-related filings: his client was being prosecuted for exercising his First Amendment right to political speech.

Essayli said the government can’t allow Straka to plead to a misdemeanor and then “bootstrap inflammatory allegations of inciting violence and suggest he is somehow responsible for the overall violence” that occurred at the Capitol.

“I think it’s really dangerous, this path the government is going down, and the criminalization of political activities,” Essayli said.

However, Friedrich was not receptive to what she said were Straka’s efforts to minimize his wrongdoing. She seemed skeptical of Straka’s claim that he didn’t know about the violence when he arrived at the Capitol, as prior statements and tweets suggested that he knew the Capitol had been breached by the time he got off the D.C. Metro and headed toward the riot.

When Straka spoke on his own behalf, he said that he didn’t recognize the person described in the government’s filings. After briefly mentioning his upbringing in Nebraska, his experience as an actor and performer, and journey to sobriety, he insisted that his public efforts aren’t about politics, but an attempt to bring people together.

“It’s about love,” he said, adding that his supporters would never support or condone violence.

Straka apologized “to all the people in America, even to those who hate my guts.” He apologized to the police in general, and in particular to the officer whose shield he saw being taken by rioters. He also said he was sorry to all the members of Congress who had to flee the Capitol as the rioters swarmed the building.

Straka said that the consequences of his participation in the Jan. 6 riot have been “monumentally devastating” to him, but that he continues to raise funds to “re-fund the police” and “back the blue.”

In issuing her sentence, Friedrich acknowledged Straka’s constitutionally-protected free speech rights, but didn’t go so far as to completely separate his words from his conduct.

“To be sure, his statements at the time and immediately after the Capitol event do inform his actions on that day,” she said.

“Even now, he’s distancing himself from the larger attack on the Capitol which he condones, wanted to condone on TV that night,” she said, noting that Straka had expressed frustration that no news show would have him on the evening of Jan. 6.

Friedrich also said the people who fought past police and breached the building that day aren’t patriots.

“That’s not what we do in this country,” she said, later adding: “Election challenges are fought in the courts, not by storming the Capitol.”

Friedrich also tacked on the maximum fine amount possible for the charge, $5,000. She didn’t specify the exact amount of community service Straka would have to serve.

Although Essayli, Straka’s attorney, insisted that his client would not commit such offenses ever again, Friedrich’s three-year probation sentence may provide an additional guarantee: Straka’s sentence will end in January of 2025, more than two months after the 2024 presidential election.