Pizzeria Owner Charged for Jan. 6 Insists She Is ‘Not a Person,’ Gets into Bible Quoting Exchange with Trump-Appointed Judge Before Being Brought Back to Jail

A Trump-supporting pizzeria owner from Pennsylvania has been espousing sovereign citizen talking points in various filings and court appearances since her arrest on federal charges in connection with the Jan. 6 siege on the U.S. Capitol. Pauline Bauer flailed again on Friday and found out that she would remain in jail as a result.

Just one week ago, U.S. District Judge Trevor McFadden, a Donald Trump appointee, reluctantly revoked Bauer’s pre-trial release because he was “very concerned about [Bauer] being willing to comply with [her] conditions of release.”

“You’re a small business owner. I don’t want to lock you up. I don’t want you to lose your restaurant,” the judge reportedly said a week ago. “I don’t like doing this, but you have made it clear that you feel you are above the law.”

After that, Bauer was hauled off to jail, practically kicking and screaming. On Friday, things didn’t go much better for her.

After Bauer reportedly referenced the Bible while repeating sovereign citizen verbiage, the judge responded with a Bible verse of his own.

“I Pauline… a living soul…”, begins Bauer in argument for release from jail. “He gave man dominion over the land…” she continues.

“Romans 13 — Let every person be subject to the governing authorities,” the judge reportedly said in response.

“I am not a person,” Bauer insisted while claiming to have diplomatic immunity in appearing as a self-described “friend of the court.”

The Washington Post’s Rachel Weiner transcribed the ensuing exchange and result this way:

Judge: “Last chance: are you going to follow my orders?”
Bauer: “Judgment day is going to come for all of you who are making money of mankind.”
Judge: “I’ll take that as a no.”
Bauer going back to jail

As Washington, D.C. NBC affiliate WRC-TV reporter Scott MacFarlane noted, Bauer’s continued pre-trial jailing is the product of her “uniquely and profoundly self-destructive episode” — specifically, the rejection of sound legal advice and the refusal to acknowledge that America’s laws apply to her.

This has been a uniquely and profoundly self-destructive episode. Bauer faces low-level charges and likely wasn’t going to face much, if any time behind bars. Now she’s back for week 2 in pretrial detention. With no trial firmly on calendar

See, for reference, the intro to her 114-page motion challenging the court’s jurisdiction (which the court previously rejected): 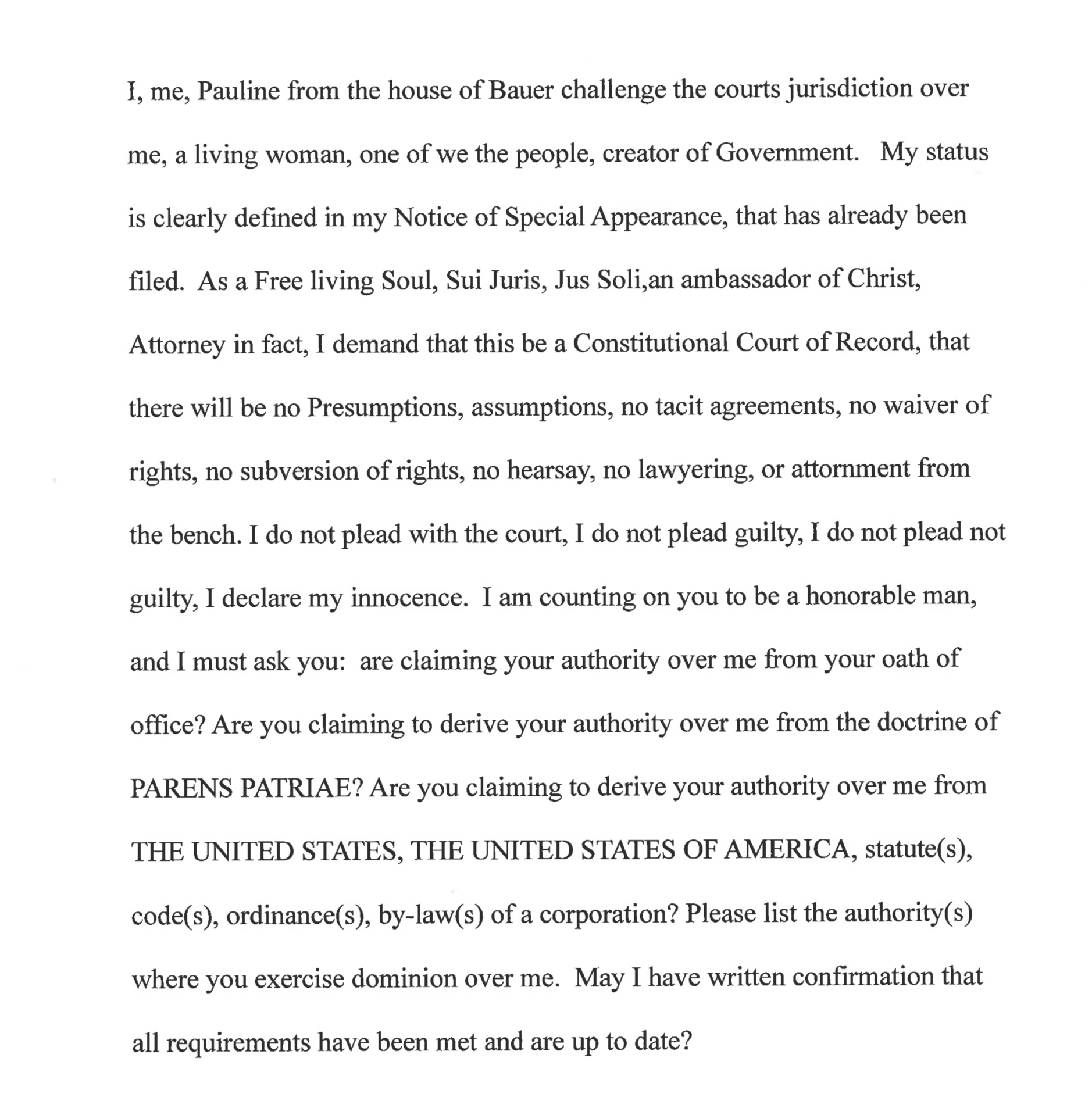 Bauer was not charged with committing violence on Jan. 6. The FBI citied social media posts and pictures placing her inside the Capitol building, including video that allegedly showed her saying she wanted to hang House Speaker Nancy Pelosi (D).