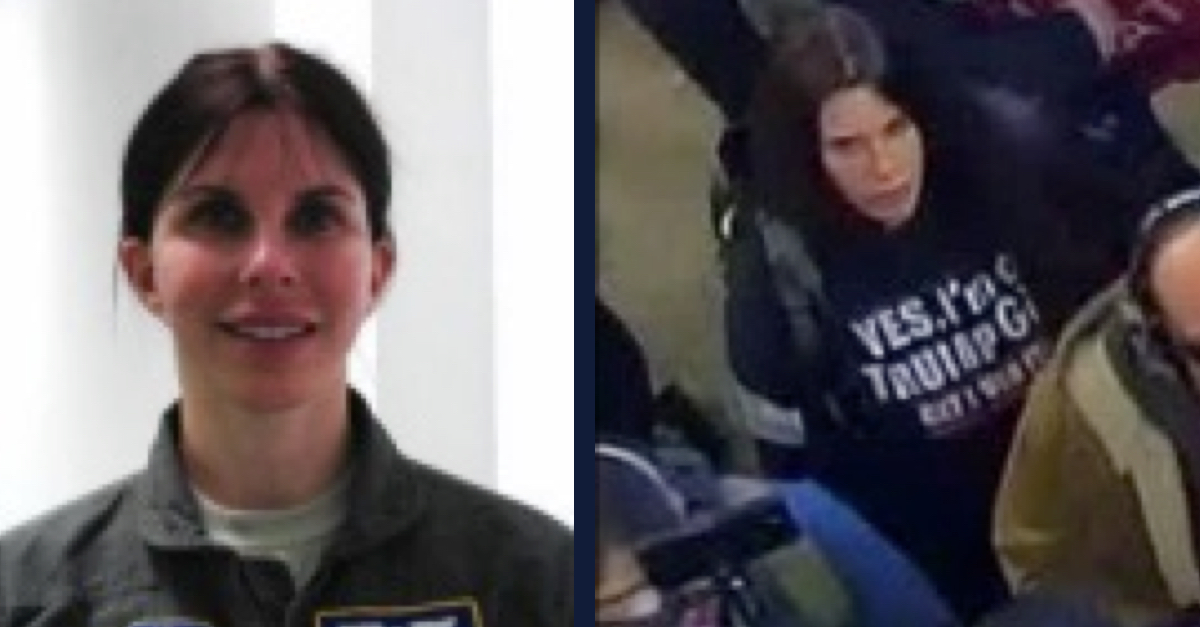 A West Virginia National Guardswoman photographed wearing a shirt emblazoned with the words “Yes, I’m A Trump Girl” as she joined the mob that stormed the U.S. Capitol on Jan. 6 has pleaded guilty to a misdemeanor.

Jamie Lynn Ferguson, 44, admitted Wednesday to entering the Capitol Rotunda alongside scores of other Donald Trump supporters angry over Joe Biden’s victory in the 2020 presidential election.  Surveillance footage shows that she was wearing blue jeans and the dark-colored sweatshirt bearing the “Trump Girl” phrase in stark white all-caps lettering.

According to the complaint, Ferguson had attended Trump’s so-called “Stop the Steal” rally with her mother and father from approximately 9:00 a.m. to 9:30 a.m. Ferguson’s parents left after the rally, while she proceeded toward the Capitol, “believing she would be able to see the President again,” the complaint said.

(Although Trump had told the crowd of supporters that he would go to the Capitol with them, he ultimately didn’t — although not, according to former White House aide Cassidy Hutchinson, for lack of trying.)

She pleaded guilty on Wednesday to one count of parading, demonstrating, or picketing in a Capitol building, a misdemeanor that carries a potential one-year jail sentence and up to five years of supervised release. The plea lets Ferguson off the hook for three additional trespass and disorderly conduct misdemeanor charges with which she has also been charged.

During the hearing, U.S. District Judge Amit Mehta, a Barack Obama appointee, engaged with a somber-sounding Ferguson in a series of questions meant to ensure that the defendant was making the plea deal knowingly and voluntarily. Ferguson answered each question with a simple “yes” or “no,” and did not make any other comments.

“Do you still wish to plead guilty?” Mehta asked as he reached the end of his colloquy.

“Are you pleading guilty because you are, in fact, guilty?” Mehta continued.

Before the Capitol attack, Ferguson was not shy about broadcasting her intention to go to Washington on Jan. 6 and join Donald Trump supporters in protesting the results of the 2020 presidential election.

On Jan. 3, she shared an article on her Facebook page with a picture of a crowd in front of the U.S. Capitol with a storm cloud and Mount Rushmore above the building and the words: “Jan. 6, 2021 — A Storm of Patriots will fight for the Republic, this will be an historic day[.]”

Ferguson added her own caption: “I pray this is exactly what DC will look like on Jan. 6th. #HoldTheLine.”

When commenters asked if she was planning on going to Washington that day, Ferguson responded that she was.

According to the complaint, the Department of the Air Force, Office of Special Investigations submitted an investigation report to the FBI advising that Ferguson, a member of the West Virginia National Guard, was suspected of breaching the Capitol building on Jan. 6. The report confirmed that Ferguson was on leave from Jan. 5 to Jan. 7, and had listed her destination as Washington, D.C.

As part of her plea deal, Ferguson will pay $500 in restitution toward the estimated $2.7 million in damage to the Capitol.