‘A Federal Crime of Terrorism’: Prosecutors Ask Judge to Send Guy Reffitt to Prison for 15 Years for Jan. 6 Attack 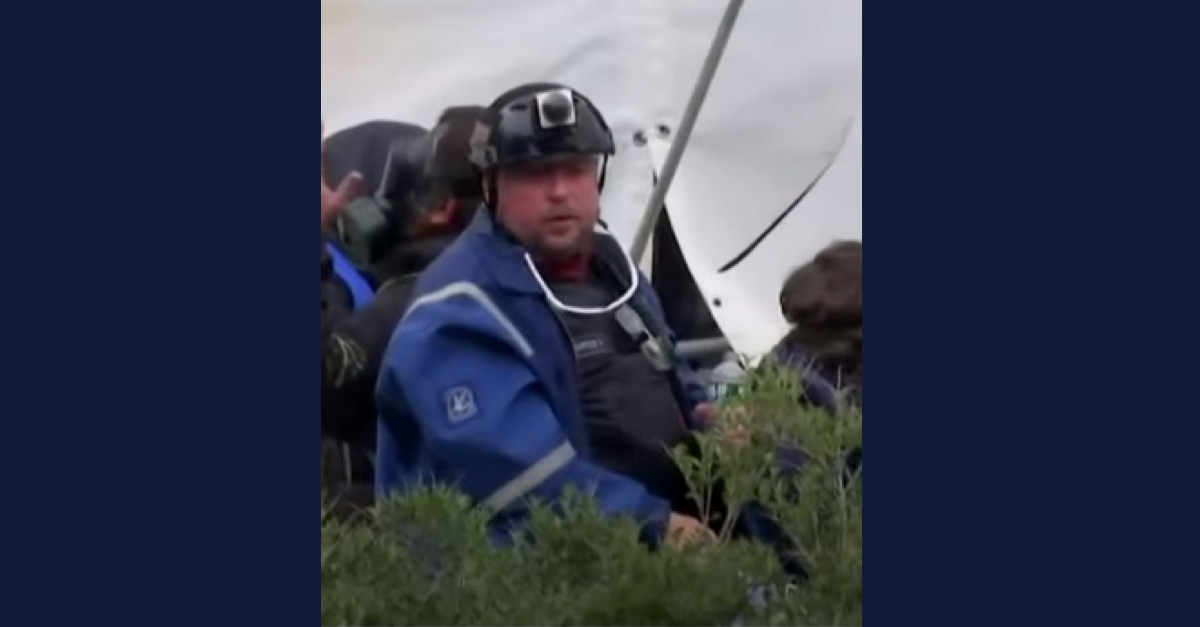 Guy Reffitt is seen at the Capitol on Jan. 6. (Image via FBI court filing).

Prosecutors have asked a federal judge to sentence a militia member from Texas who was convicted of bringing a gun to the Capitol on Jan. 6 to 15 years behind bars, arguing that his actions were “intended to promote [] a federal crime of terrorism.”

His lawyer has asked for a sentence of 24 months.

Guy Reffitt, 49, was convicted by a federal jury in March of five counts, including obstruction of an official proceeding of Congress and bringing a gun to the Capitol, both felonies. He was seen facing off against police on the Capitol steps on Jan. 6, as a growing mob of Donald Trump supporters — angry over Trump’s loss in the 2020 presidential election — tried to stop Congress from certifying the results.

Indeed, the mob did cause Congress to temporarily stop certifying Joe Biden‘s electoral win; as rioters roamed the building, lawmakers were forced to either evacuate or shelter in place.

Reffitt, a member of the Three Percenters militia group, which draws its name from the false idea that only three percent of American colonists fought against the British in the Revolutionary War, also warned his children against reporting his participation in the riot to federal authorities.

“Traitors get shot,” he said to two of his kids in the days following Jan. 6, according to the feds.

DOJ: Reffitt’s Actions Were “Intended to Promote a Federal Crime of Terrorism.”

Prosecutors also argued that Reffitt’s behavior warrants an upward departure because his “offense of conviction ‘involved, or was intended to promote, a federal crime of terrorism.'”

In its sentencing memorandum, the government argues that U.S. Judge Dabney Friedrich should make an upward departure from the federal sentencing guidelines range of 9 to 11.25 years, or 108 to 135 months.

Reffitt, armed with a holstered handgun, police-style “flexicuffs,” and fortified with a tactical helmet and body armor, confronted three U.S. Capitol Police officers on the west side stairs of the Capitol building.

“Reffitt rushed at the officers, who unsuccessfully tried to repel him with two different types of less-than-lethal projectiles before successfully halting his advances with pepper spray,” the DOJ’s sentencing memo says. “To assist Reffitt, other rioters cut down the tarp covering the scaffolding, both to further penetrate into the scaffolding and to use the tarp as a shield to protect Reffitt from additional pepper spray and projectiles. Before and after being hit with pepper spray, Reffitt encouraged other rioters to charge forward at the officers, which they did both by moving up the stairs and by climbing up through the scaffolding, overwhelming the police officers trying to defend their position on a landing at the top.”

That landing, prosecutors say, was the “access point to the final set of stairs leading to the Upper West Terrace and the Capitol building itself.”

Reffitt didn’t breach the Capitol, but prosecutors say that his actions that day made the siege on the Capitol possible.

“Reffitt’s actions enabled rioters to reach the West Front of the Capitol Grounds, where some of the most vicious assaults on police officers occurred,” prosecutors argue in the government’s sentencing memo. “And those assaults, in turn, made the rioters’ entry into the United States Capitol Building on January 6, 2021, possible. Initiated by the most fervent smaller groups and individuals within the crowd — individuals like Reffitt — and using the mob itself as a cloak for their actions, each blow helped the crowd penetrate further into the United States Capitol Police’s defenses until the building itself was accessible and its occupants were at risk.”

Prosecutors also argued that Reffitt’s behavior warrants an upward departure because his “offense of conviction ‘involved, or was intended to promote, a federal crime of terrorism.'”

Although Reffitt was not convicted of an enumerated terrorism offense, prosecutors say, he acted “with the object of influence government conduct or retaliating against a government.” That intention warrants a terrorism enhancement to the judge’s sentence, the government says.

“It is clear from Reffitt’s conduct, including his express and implied intent, that Reffitt sought not just to stop Congress, but also to physically attack, remove, and replace the legislators who were serving in Congress,” the DOJ’s sentencing memo argues. “This is a quintessential example of an intent to both influence and retaliate against government conduct through intimidation or coercion.”

So far, the longest sentence handed down in Jan. 6 conviction is just over five years, according to a Law&Crime review of sentences in Jan. 6 cases. Robert Palmer, who had pleaded guilty to one count assaulting, resisting, or impeding officers while using a dangerous weapon, was sentenced in December to 63 months in prison.

Reffitt, through his lawyer F. Clinton Broden, asked for a downward departure and a sentence of two years. Broden focused heavily on a federal sentencing factor that requires judges to try to avoid unnecessary sentencing disparities, and he listed other sentences issued so far in Jan. 6 prosecutions — including Palmer, Scott Fairlamb (41 months), the so-called “QAnon shaman” Jacob Chansley, and Lonnie Coffman, among others.

Those defendants, however, pleaded guilty; they were not convicted at trial. Still, Broden argued that Reffitt should not receive a harsher sentence than those defendants, some of whom engaged in direct violence with police by attacking them with weapons, objects, and chemical spray while others entered sensitive parts of the Capitol itself.

“[T]he very fundamental question that must be answered is, should Mr. Reffitt, who did not engage in any violence, did not throw any objects at police, did not attack police with any weapons, did not spray police with hazardous chemicals contained in fire extinguishers, spent only a limited time in the restricted areas (i.e. the Capitol steps and landing), and did not enter the Capitol (let alone the Senate chambers) be treated similarly to those that did?” Broden argued.

“Frankly put, most if not all defendants who received a sentence of greater than 24 months imprisonment are at a whole different level than Mr. Reffitt and Undersigned Counsel submits that is it important for Mr. Reffitt’s sentence to reflect these distinctions,” Broden added.

Broden also requested that, instead of day-for-day credit of the 19 months Reffitt has already spent behind bars, the court fashion a “different ratio and reduce any sentence it would otherwise impose in this case by the additional number of months produced by that ratio.”

Such a reduction, Broden argued, would be fair in light of the solitary conditions in which he says Reffitt has been held.

Jackson Reffitt — Guy’s son who flagged his father’s activity to the FBI — did not write a letter of support, but he did not go unmentioned.

Jackson’s sister Peyton Reffitt recounted the now-notorious exchange between Reffitt and the two children in the days after he returned from Washington. An increasingly paranoid Reffitt had told his children that if they told the FBI that he was part of the Capitol siege, they would be traitors to him, and “traitors get shot.” Reffitt also told Peyton that if she was recording him on her cell phone at that moment, he would “put a bullet” through her phone.

In a letter to Friedrich in support of her father, Peyton described the exchange as “a statement that really had me and Jackson feeling disappointed in his choice of words.”

“Jackson claims he felt as though his life was threatened by our fathers statements about ‘traitors getting shot’ but I was there and I can say honestly that I saw our father ranting to more of a bigger picture of things rather than us, his own children,” Peyton wrote. “Jackson immediately asked if what he said was a threat, to which our father replied ‘don’t put words in my mouth’. Our father also stated he’d put a bullet through my phone if I was recording his nonsense. I thought ‘he pays for the phone, it’s his anyway’, although I wasn’t recording. I never felt threatened, my father doesn’t threaten me, I rather get annoyed about his dramatic way of speech that often uses outdated references and recitations. I guess he was nervous about being discovered and picked up by the FBI, as they were already doing in North Texas.”

Guy Reffitt himself also discussed Jackson in his letter to the judge, blaming his fractured relationship with his son, at least in part, on a teacher who was “very far on the left side of the spectrum” with whom Jackson, according to Reffitt, had an “odd teacher relationship.”

In that same letter, Reffitt, who has been incarcerated since his arrest in January of 2021, appeared to express sorrow over his actions at the Capitol that day.

“My regrets for what has happened is insurmountable,” he wrote in a letter to Friedrich. “There’s not a day go by that I don’t regret how much this has affected [his family]. 227 days of solitary confinement allows lots of time to reflect.”

“43% of my time has been in my cell wishing I could return back the clock and stay home,” Reffitt later wrote.

Reffitt was the first of the more than 855 Jan. 6 defendants to go to trial. So far, 11 trials have resulted in at least partial guilty verdicts, including at least 9 defendants convicted of felonies, according to a DOJ summary of the prosecutions and Law&Crime’s own review of court records.

Read the government’s sentencing memorandum, Reffitt’s memo, and the letters in support of Reffitt below.