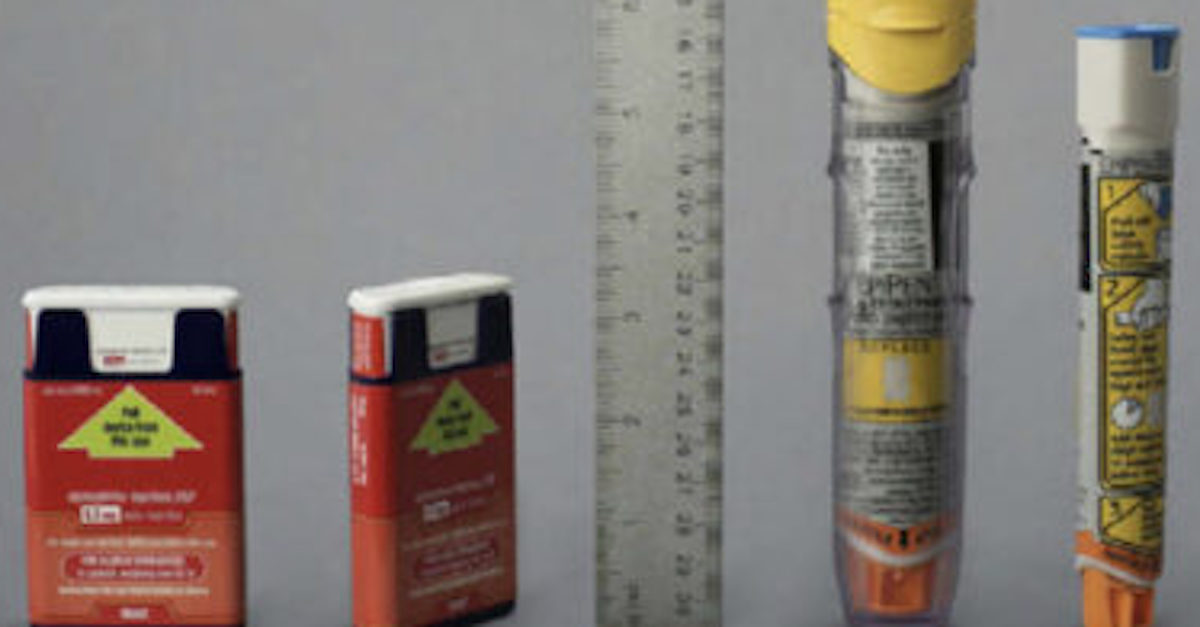 The U.S. Court of Appeals for the 10th Circuit affirmed a district court’s dismissal of an antitrust lawsuit against pharmaceutical company Mylan, the distributor of EpiPen, by a rival firm.

Mylan acquired the rights to distribute EpiPen in 2017, a time during which the price of the drug skyrocketed to over $600. Pharma giant Sanofi sued Mylan and alleged that Mylan monopolized the epinephrine auto-injector market, essentially blocking Sanofi from bringing its own product — the Auvi-Q auto-injector — to market. The two products have the same purpose: the delivery of potentially life-saving epinephrine for individuals at risk for anaphylaxis due to allergic reaction.

In its lawsuit, Sanofi argued that coupon and rebate programs offered to health plans by Mylan amounted to anticompetitive activity.

As seen in the above image, Mylan’s yellow-capped EpiPen allows an individual to flip the cap open and swing the tube down firmly against one’s thigh, causing the needle to automatically protract and inject epinephrine. By contrast, the red-labeled Auvi-Q is smaller and flatter, and has a retractable needle. It also plays audio instructions. To administer Auvi-Q, the patient removes its cover and follows the audio instructions to press against the leg without the need of the swing motion.

The district court threw out the lawsuit, and a three-judge panel of the 1oth Circuit affirmed. U.S. Circuit Judge Bobby Baldock, a Ronald Reagan appointee, penned the 89-page decision for panel, which found that the use of coupons and rebates do not constitute federal antitrust violations. U.S. Circuit Judges Nancy Moritz (a Barack Obama appointee), and Allison Eid (a Donald Trump appointee) also heard the case.

Baldock discussed in detail the relationship between drug manufacturers and health care plans, and explained that drug pricing is complex and that typically, due to rebate and coupon programs, the amount a consumer pays to a pharmacy does not represent the actual price of the drug.

Baldock provided some market context about the potential for Sanofi’s sales:

From the outset, Mylan knew Auvi-Q was a potentially disruptive product. Auvi-Q offered patients a solution to one of EpiPen’s most significant problems: its size and shape. This would make Auvi-Q a particularly attractive option for certain patient populations who do not carry bags or purses

Still, EpiPen controlled over 80% of the market during the years relevant to the lawsuit. Mylan argued that any rebates it provided were “short-term and easily terminable” and that it “never prevented payors from making formulary changes.”

Baldock said the panel was in “full agreement” with the district court’s dismissal.

“At the height of its allegedly anticompetitive behavior, Mylan only foreclosed Auvi-Q from 31% of the U.S. population,” the judge explained. “That means Auvi-Q was still covered and available for nearly 70% of the U.S. population. And remember, patients whose health plans excluded or restricted Auvi-Q could still pay out of pocket for the device if they so desired.”

“When a patient purchases health insurance, the patient necessarily relinquishes some treatment-choice autonomy in exchange for lower premiums,” Baldock wrote, noting that some health plans might choose to offer lower premiums by covering only EpiPen.

“The proper balance between health plan premiums and formulary coverage is better struck through the workings of the private market than the judiciary,” the judge added.

“We are disappointed by the Tenth Circuit Court of Appeals’ decision and continue to firmly believe Mylan’s actions were anticompetitive,” a Sanofi representative told Law&Crime via email Monday. “We are evaluating next steps.”

The Sanofi lawsuit has not been the only litigation over EpiPen. In February 2020, Mylan settled a class action lawsuit for price gouging for $264 million with a class of plaintiffs.

Counsel for Mylan did not immediately respond to request for comment.