Man Who Dressed as ‘Captain Moroni’ from Mormon Sacred Text on Jan. 6 Tells Judge He Still Believes Election Results Were ‘Tampered’ with, Gets Jail Time 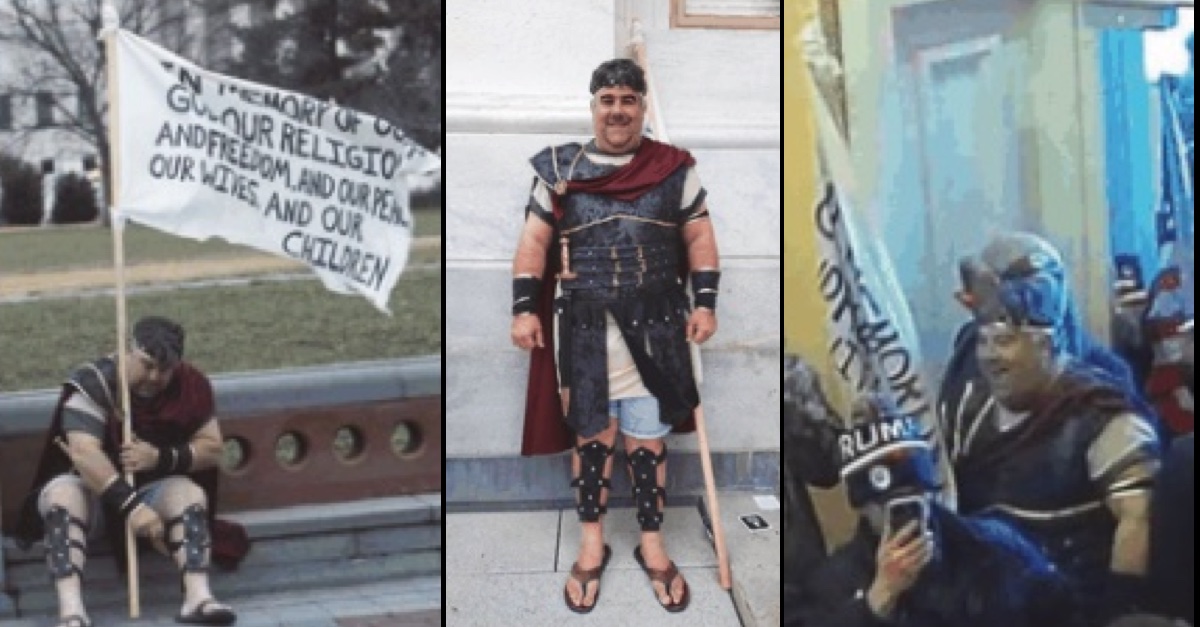 The Arizona man who donned an ensemble he claimed represented a figure from the Book of Mormon will spend 45 days in jail for joining the violent mob that stormed the U.S. Capitol.

James Wayne Entrekin, 49, wore what prosecutors described as a “Roman Gladiator Costume” as he made his way through parts of the Capitol building on Jan. 6, joining hundreds of Donald Trump supporters who pushed their way inside in an effort to stop Congress from certifying the results of the 2020 presidential election.

He told another rioter that he was dressed in the style of Captain Moroni, a figure from the Book of Mormon who is believed to have led a fight against a group of people who “wanted to overthrow democracy and install a king.”

Entrekin, however, appears to have wanted to stop the democratic process himself, insisting that Joe Biden should not take office despite winning the election.

“We can’t let Biden … to be our president,” Entrekin recorded himself saying while inside the Capitol. “We can’t … there’s no way.”

“Where’s my ice cream, Nancy?” he can be heard saying, in what prosecutors say is a reference to Pelosi’s appearance on a TV talk show in which she shared a video of her freezer that she had stocked with high-end ice cream.

“Why can’t you people just do what he want?” he also recorded himself saying in a diatribe prosecutors say was directed at members of Congress. “Why do you gotta make it so hard? Why do you take our money and use it for nefarious purposes?”

Entrekin entered the Capitol twice, having been forced out the first time by police officers. Prosecutors say he entered two sensitive areas of the building—the Senate Parliamentarian’s Office and the office of Sen. Jeff Merkley (D-Ore.), where he recorded people destroying property.

He pleaded guilty in January to a misdemeanor count of parading, demonstrating, or picketing in a Capitol building. He faced up to six months in jail, five years on probation, and a potential $5,000 fine.

At his sentencing hearing on Friday, Entrekin said that he was sorry he went into the building, although he didn’t seem to have budged on why he needed to have gone there in the first place.

Entrekin said that despite his defiant-sounding remarks at the time, he took the breach seriously, although his words indicated that he might not fully believe he didn’t have permission to be there.

“It was very solemn,” he said. “Despite my toting around that big flag and putting up a smile or two, inside I knew at a fundamental level that the people that had broken in and allowed for us to come in, that was wrong and my coming in afterwards hence was also wrong.”

Entrekin said that the purpose of wearing the costume was “to portray a character in the book of my belief, my church.”

Pan said that while she believed Entrekin was sincere in his regret for entering the Capitol, his actions showed that he intended to interfere with a cornerstone of democracy.

“Mr. Entrekin unquestionably shared the goal of stopping the peaceful transition of power by blocking certification of the election results,” Pan said.

The judge noted that even though he was not accused of engaging in violence or property destruction, his mere presence—including the fact that he seemed to “cheerfully narrate” his movements and the chaos around him—helped enable the mob to overwhelm police.

“He lent his presence and support to group effort to swarm the building,” she said. “This goal could not have been achieved without the support of people like Mr. Entrekin.”

During the hearing, Pan directly addressed the issue of “split sentences,” or a sentence that includes a period of incarceration and probation. Judges in the D.C. district have been divided on the issue.

“I adopt the reasoning of the ruling in [U.S. v. Little],” Pan said, referring to a written opinion by Senior U.S. District Judge Royce Lamberth, a Ronald Reagan appointee, that said federal sentencing and probation law “affirmatively authorizes” a court to impose a sentence of jail and probation in petty misdemeanor cases.

Like Lamberth, Pan determined that federal law does allow such sentences in cases like Entrekin’s, where the crime is a petty misdemeanor.