Woman Sentenced for Giving Undercover Cop Down Payment to Kill Her Then-Boyfriend’s Sister over $40,000 Debt 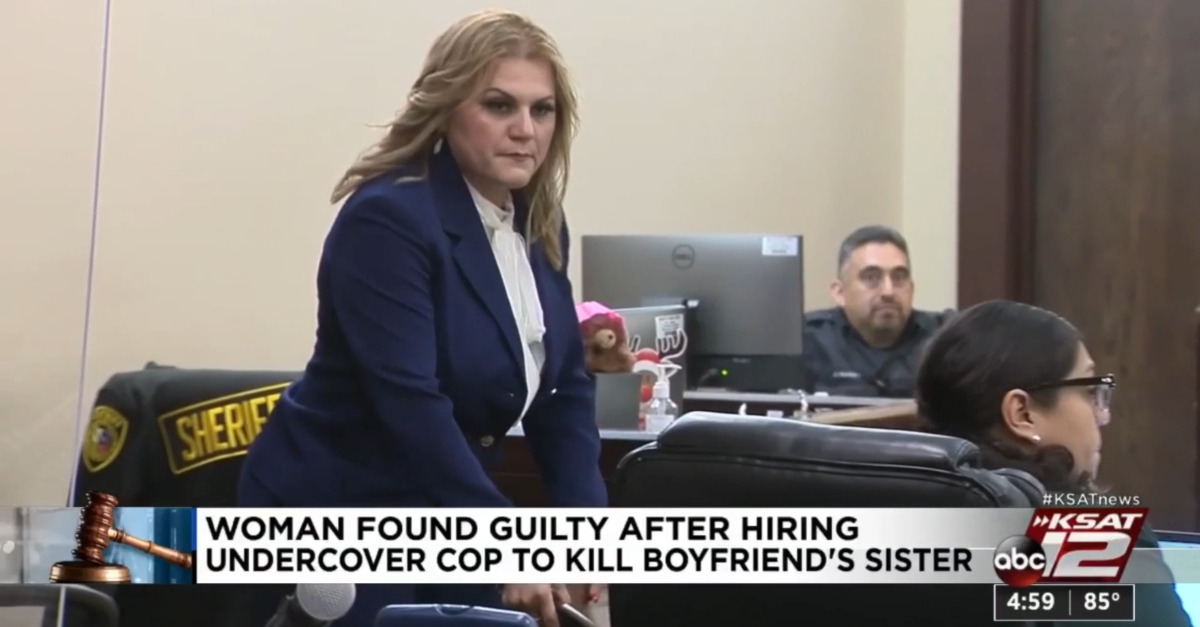 A Texas woman was sentenced on Friday for trying to hire someone to kill her then-boyfriend’s sister, who owed her money. The person she thought would carry out the hit turned out to be an undercover cop.

Angelica Navarro-DePaz, 44, must spend 20 years in prison after jurors heard her orders to carry out a murder. She reportedly will be eligible for parole after serving a quarter of the sentence.

“I don’t care how she dies,” Navarro-DePaz said in a recording, according to The San Antonio Express-News. “Snatch her, slit her throat, do whatever.”

Authorities said the defendant was targeting Anayeli Mendoza Flores. Flores reportedly owed $40,000 after Navarro-DePaz snuck her into the United States.

To get the murder plot in motion, Navarro-DePaz made a $850 down payment of a $1,700 total price, authorities said.

But Navarro-DePaz took the stand in her own defense. She asserted she was the real victim in all of this. Yes, that was her voice on the incriminating recording, but what she did was done under duress, according to Navarro-DePaz’s version of events. She and her children faced threats from a woman identified as “Katie,” the confidential informant for authorities.

Katie isn’t around to speak on her own behalf. She died in 2021, according to KSAT.

As far as Navarro-DePaz was concerned, however, Katie and Flores belonged to the same criminal group. Facing threats against her and her children’s lives, Navarro-DePaz approached the undercover officer and spoke to him as scripted by Katie, according to this version of events.

Flores testified to never meeting Katie, according to KSAT.

Navarro-DePaz’s reportedly estranged husband Jose DePaz backed up the defense’s story, but his testimony broke down in dramatic fashion. He maintained that Katie and Flores came to his business to threaten his wife and children. Prosecutors reportedly objected to this as hearsay.

Judge Melisa Skinner cleared jurors out of the courtroom as Jose DePaz acted emotionally and kept talking over the state.

“My kids are in danger,” he said through a translator. “I have an opportunity to talk and I have to say they are in danger.”

At one point, DePaz appeared to be crying as he got out of his chair and seemed to kneel on the witness stand.

Jurors ultimately did not buy the defense’s story and convicted Navarro-DePaz on Wednesday of solicitation of capital murder.

“She’s had five years to think of this story and come up with the lies she has told you,” she said during closing arguments on Wednesday.

The defense maintained that Navarro-DePaz never wanted to carry out the hit, and that there is no proof showing that she did.

At the time of her arrest, police maintained they had more than just her words to use against her. They had evidence of the specific steps she took to get the killing done.

“When you get a case like this, you’ve got to determine how credible it is,” San Antonio police Sgt. Jesse Salame said in an Aug. 16, 2017 report. “People say things sometimes and just saying that alone is not enough to do anything about it. It’s when you start to make arrangements and you start to exchange money and take those other steps to make this happen. That’s when we are able to prove the case and that allows us to make an arrest.”

“I do hope that the victim in this case is able to rest at peace tonight knowing that the person who victimized her for all this time, the person who did this to her will be behind bars for the next 20 years,” Phillips said.