Kansas Man Who Denies Turning Himself in to the FBI After Jan. 6 Gets Permission to Represent Himself 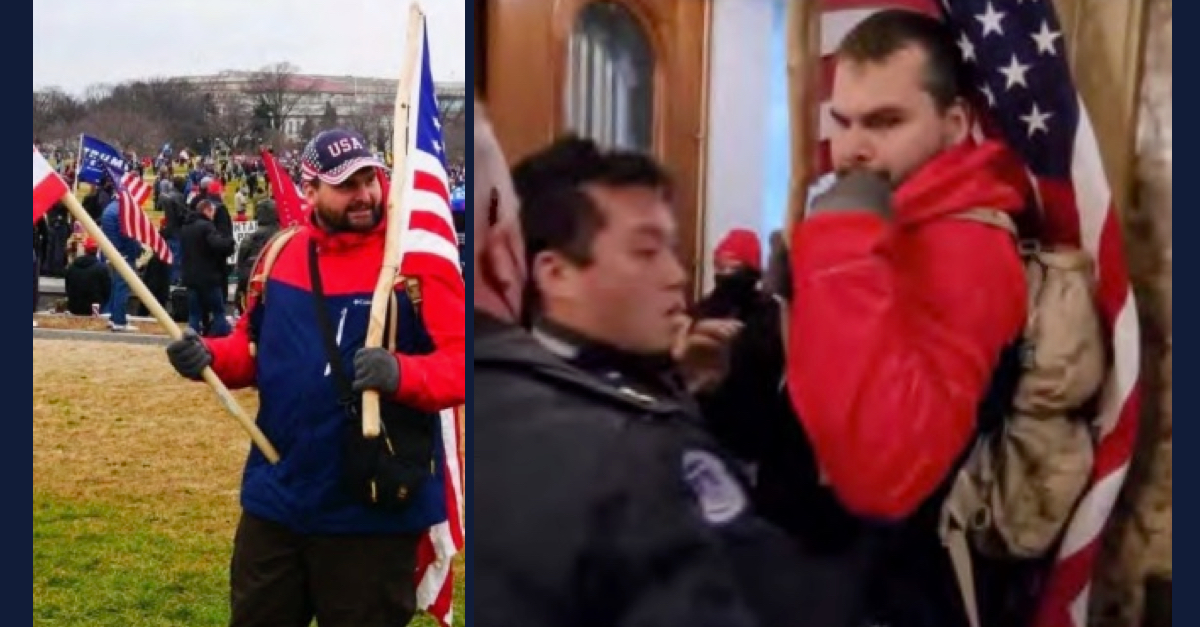 A Kansas man who allegedly turned himself in to the FBI after breaching the U.S. Capitol building on Jan. 6 — although he vigorously denies doing so — has gotten the go-ahead from a federal judge to represent himself.

William Pope, 36, faces multiple felony and misdemeanor charges, including obstruction of Congress, civil disorder, and a handful of trespassing and disorderly conduct allegations. According to prosecutors, he entered the Capitol with his brother, Michael Pope, who lives in Idaho, after the two met up in Philadelphia on Jan. 5.

As Donald Trump supporters flooded the building, angry over his loss to Joe Biden in the 2020 presidential election, William Pope allegedly resisted police officers’ attempts to stop him from going inside the building and refused to leave an elevator when asked by police, forcing them to engage in a physical confrontation.

Pope is also allegedly seen in video taken at the time Ashli Babbit was shot and killed as she reportedly tried smash a window outside the Speaker’s Lobby.

“I’m Not Going to Have Much Money Left Over, Your Honor.”

Pope had filed a request in June for his lawyer, Gregory English, to be allowed to withdraw from the case so that he could represent himself.

At a hearing on Tuesday, U.S. District Judge Rudolph Contreras wanted to know why.

“I feel I know the facts of my case better than anyone, and I feel I’m going to be the one who most vigorously defends myself at trial,” said Pope, who had previously told the judge that he has completed two master’s degrees and is currently in a Ph.D. program. “As you know, the charges against me the government has brought are very serious, and I feel I need a vigorous defense to counteract those and I believe I’m the best one able to do that.”

Contreras, a Barack Obama appointee, noted that Pope had cited English’s apparent “lack of technical ability” and reiterated that he would be prepared to appoint a new attorney that was more adept at handling the large amount of digital discovery that has become commonplace in Jan. 6 cases.

“But you indicated your concerns were greater than that,” Contreras said. “It wasn’t just a matter of a lack of technological ability.”

“I believe I need to have the ability to manage and control my own case,” Pope told the judge. “I appreciate the knowledge and procedural skills an attorney has. However, I feel there are some intangible decision-making elements I need to maintain control of.”

As Contreras began the colloquy with Pope, the defendant at times appeared relaxed, almost jubilant, offering jokes about his situation and the possible penalties he could face.

“There are a lot of counts, as I indicated earlier,” Contreras said. “We have to go through them,” he added, noting that it was likely to take some time.

“The government can drop a few if they’d like to,” Pope shot back, eliciting a laugh from the judge.

When Contreras told him that one charge — entering and remaining in a restricted building or grounds — comes with a potential $100,000 fine, Pope again responded with a joke.

“I’m not going to have much money left over, Your Honor,” Pope said. “They’re going to take it all if they [convict].”

“I might be able to afford the $25 [special assessment],” he added, referring to the mandatory financial penalty imposed on anyone convicted of a federal crime.

After going through the charges and potential consequences — including the obstruction charge, which carries a potential 20-year prison sentence and a fine up to $250,000 — Contreras asked Pope if he is familiar with the federal rules of evidence.

“I’m becoming more familiar,” Pope said. “I’ve got a book on them now.”

English, Pope’s soon-to-be former lawyer, indicated that he believed his client could indeed handle his own criminal representation, despite not having had formal legal training.

“It’s not often I have a client that has his level of intelligence and education,” English said.

In the end, Contreras agreed to allow Pope to represent himself, although he said he would appoint what’s known as “standby counsel” to assist with “basic courtroom mechanics and routine clerical matters.”

When Pope suggested setting his next status conference on the same day as his brother’s, Contreras said that they “seem to be heading in different directions” and that he didn’t see the need to coordinate the two going forward.

Pope: DOJ Allegation That He Turned Himself in Is “False Information.”

Prosecutors have said that Pope turned himself in to authorities, telling a local newspaper that he sent a text message saying: “I’ve reported myself to the FBI and remain loyal to the United States of America.”

According to the Statement of Facts:

This appears to be a reference to a message William Pope left on the FBI internet tip system to report criminal activity connected to the January 6, 2021 riot. Specifically on Jan. 12, 2021, William Pope left the following message:

“I would like to turn myself in. I was in the Capitol on Jan. 6. I did not damage any property or engage in any violence. I am loyal to the United States and was only there to exercise my freedom of speech. I left the building voluntarily.”

Pope also submitted a picture of himself in the area of the Capitol on Jan. 6, holding two flags and wearing a cap emblazoned with “USA,” prosecutors say.

In his June letter to the court, however, Pope insisted that he did not turn himself in to authorities.

“[T]he prosecution’s charging documents incorrectly state that I reported myself after initial media reports about me came out,” Pope’s letter says. “Whether that false information was intentionally included by the DOJ, or included by error, the result is the same. Local and national publications have since perpetuated false and defamatory information about me which increases negative bias towards me as a defendant.”

Pope said that the “lack of factual accuracy could taint a jury” and deprive him of his right to a fair trial.

In his letter, Pope also said that the lawyer he had prior to English was slow to get him digital discovery, and that the government has not provided “new batches of discovery” since English took over representation.

The DOJ disputed this in a responsive filing, saying that the “case-specific discovery in this matter is substantially complete.”

“Contrary to the representations in Defendant’s June 28 letter that he has not received his ‘full discovery’ and that he has only received ‘partial batches of discovery,’ the government produced most of the case-specific discovery to Defendant’s prior counsel in productions that were made on May 4, 2021 and August 14, 2021.”

The filing added that the government re-produced the discovery to Pope’s new lawyer, and made a “small supplemental production of case-specific discovery” in June.

Read the complaint against Pope here: