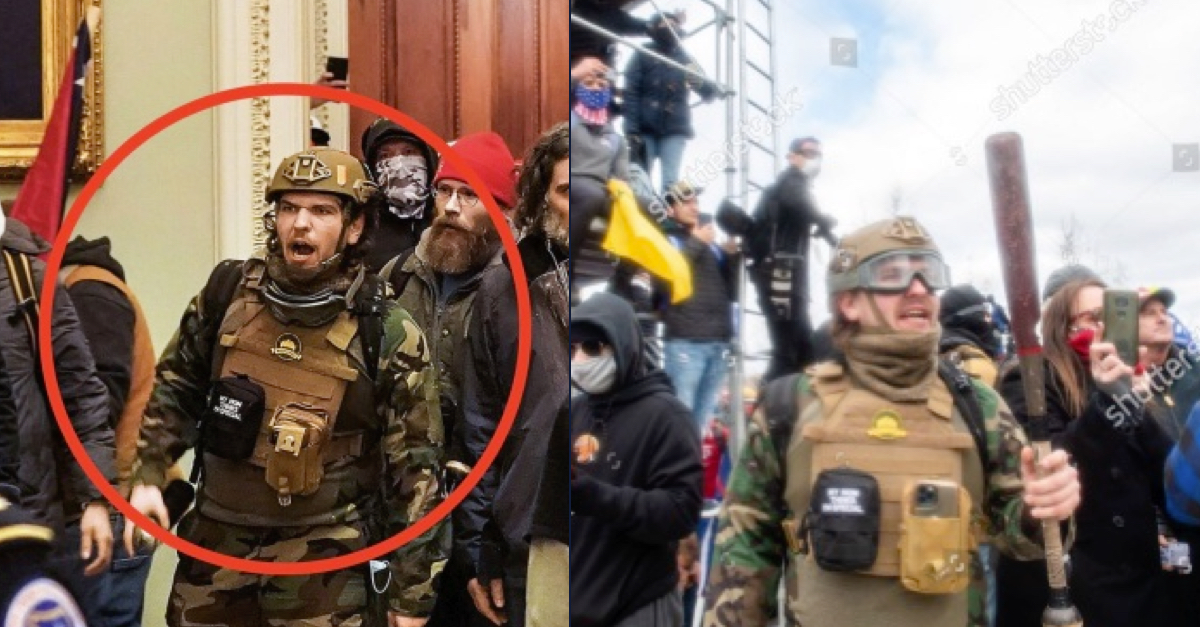 Robert Gieswein at the Capitol on Jan. 6 (via FBI court documents)

After a Colorado man accused of assaulting law enforcement on Jan. 6 indignantly disrupted his pretrial proceedings about his “First Amendment right” to speak on his own behalf, a federal judge informed his attorney that his client’s protections do not extend to ranting out of turn in a courtroom.

Accused police assailant Robert Gieswein “will be back in a lockup in a second if he keeps mouthing off,” Senior U.S. District Judge Emmet Sullivan warned.

Already jailed pending trial, Gieswein faces multiple felony charges, including assaulting police officers, civil disorder, and obstruction of an official proceeding. Decked out in military-style gear including a helmet, goggles, and tactical vest, Gieswein allegedly entered the Capitol through a broken window. He allegedly sprayed law enforcement with a chemical spray and brandished a baseball bat as he and other supporters of Donald Trump overran police and swarmed the Capitol building as Congress was certifying Joe Biden‘s win in the 2020 presidential election.

According to Gieswein’s lawyer, Ann Mason Rigby, residents in the District of Columbia feel “victimized” and “targeted” by what happened on Jan. 6, and they are more invested in the outcome of Gieswein’s trial because “they know that the next Jan. 6” would also likely take place in the capital. Rigby made that point in seeking to change venue of her client’s trial.

“That is the government’s theory,” Rigby agreed.

“It’s not far-fetched,” Sullivan replied, adding: “Where in the continental U.S. or Hawaii can Mr. Gieswein get a fair trial, if not D.C.?”

“In a city where a jury will not be made up of people who were directly impacted by Jan. 6,” Rigby started to reply.

“But the theory is that everyone in a democratic country is impacted by terrorists storming the Capitol,” interrupted Sullivan, a Bill Clinton appointee. “That is the government’s theory. The argument is this was the worst assault on democracy since the War of 1812.”

At this point, as Sullivan and Rigby were talking over each other, Gieswein jumped into the exchange.

“Your honor, I object to all of those comments there,” Gieswein said.

“I don’t want to hear form you,” Sullivan said, telling Gieswein that he should keep talking only if he wanted to be “excluded from the room.”

“This is my case and I have a First Amendment right,” Gieswein replied.

After Sullivan said Gieswein “mouthing off” would land him behind bars, Gieswein reminded the judge that he was already incarcerated. Sullivan urged Rigby to talk to her client and cautioned Gieswein once again against speaking out in court.

“You have an excellent lawyer speaking for you,” Sullivan said.

“You’ve Got to Get a Hold of Yourself”

The judge softened his tone somewhat later in the hearing, telling Gieswein that he could end up hurting his own case.

“Trust me, Mr. Gieswein, if the case remains here—and I’m inclined to let it remain here—it’s going to be fair,” Sullivan said. “You’re going to have to get a hold of yourself. I don’t want you to have any outbursts during trial. I don’t want you to prejudice yourself before a jury that’s been selected.”

“I just feel I would like to speak in my case,” Gieswein replied. “I’m the defendant, I have a right to speak.”

“As smart as you are, you’re not a lawyer, and you have these two brilliant lawyers representing you,” Sullivan said, referring to Rigby and Elizabeth Ann Mullin, who both work for the office of the federal public defender. “I have a job too, to save you from yourself,” Sullivan added.

“You’re not going to prejudice me,” the judge told the defendant. “You start exhibiting this conduct in front of a jury and you know, it’s not good. It’s not good for your presentation … Let your attorneys work for you. They’re brilliant. They’re hard-working. They file motions for you at 10 or 11:00 at night. That’s their job.”

Gieswein’s trial is set to start on Oct. 24, having been continued from its original February date.

The defendant’s outburst aside, Sullivan said he was not inclined to grant the motion on Wednesday, suggesting instead that he would have an expanded voir dire process to ensure that a fair jury was selected. He also wanted to give prosecutors the chance to respond to survey data filed by the defense in support of its argument that D.C. jurors would be prejudiced against Gieswein.

The rest of Wednesday’s hearing did not generally go in the direction Gieswein had perhaps hoped, as Sullivan denied three of his motions: a motion to dismiss two of the assault counts counts against him, a motion to dismiss the indictment on the grounds that his right to a speedy trial has been violated, and a motion to reconsider detention.

Gieswein was arrested in January of 2021 and has been in custody since then.

Sullivan disagreed with the arguments from Gieswein’s lawyers that the indictment against him failed to specify facts and details to meet the elements of the offense. He also noted that several other judges overseeing Jan. 6 cases denied motions to dismiss on similar grounds.

Sullivan said that while Gieswein had presented new information regarding his detention—specifically, information about poor conditions in the D.C. jail where he is housed—the judge did not find that those circumstances had a material affect on whether Gieswein would pose a danger to the community if released. Regarding the speedy trial motion, Sullivan found that the pace of Gieswein’s case was not due to purposeful delay or bad faith, and therefore that his right to a speedy trial was not being violated.

Toward the end of the hearing, prosecutors noted that the government had offered Gieswein a plea deal that would allow him to drop all but two of the assault charges against him. Gieswein rejected that offer.