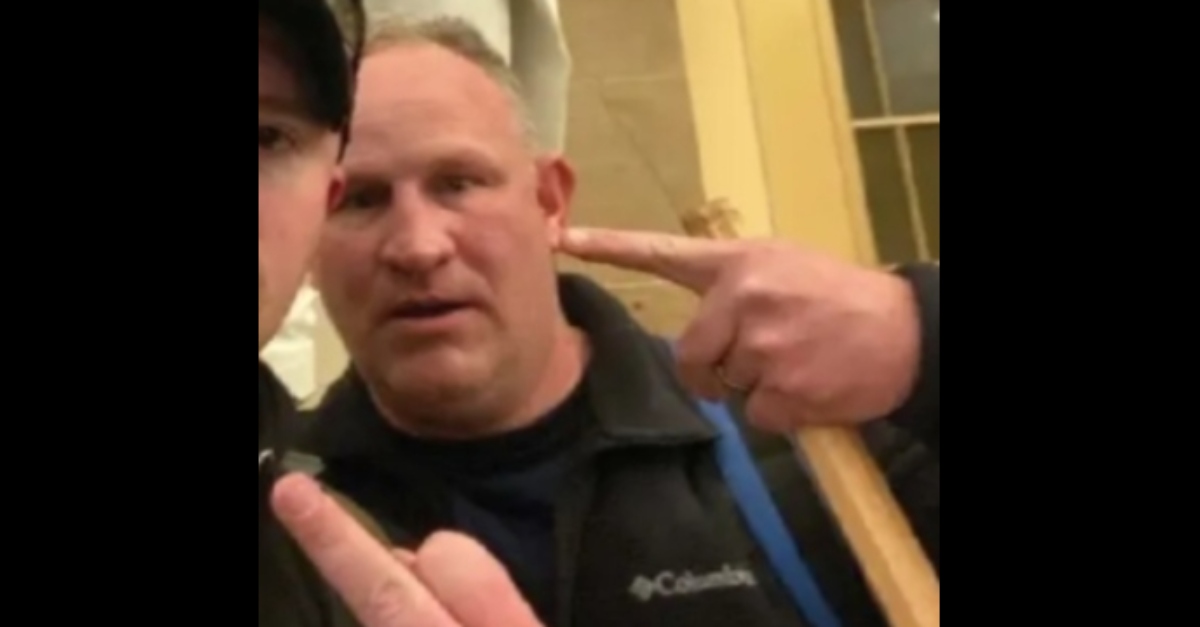 A former police officer who lost his job after being charged with storming the U.S. Capitol also lost his freedom on Wednesday. A federal judge, alarmed by the stockpile of guns and other weapons found in the defendant’s home, ordered him to jail and found he may have committed a felony.

Thomas Robertson, a 47-year-old former Rocky Mount, Va. police officer, had previously been out on bail since shortly after his arrest in January.

Then, the FBI said it found a loaded M4 military-style assault rifle, ammunition, four silencers, and what authorities described as a “partially-assembled pipe bomb” in his home on June 29. A prosecution motion to revoke Robertson’s bond landed on the docket shortly after that, and the ex-officer distanced himself from what the FBI reported finding.

“As explained below, there is probable cause to believe that Robertson committed a felony—willfully shipping or transporting firearms and ammunition despite being under felony indictment—while on pretrial release,” his ruling states. “Under the applicable statute, this finding gives rise to a rebuttable presumption that Robertson cannot be safely released into the community pending trial under any conditions.”

Prosecutors also flagged Robertson’s rant some six months after the siege of the U.S. Capitol, suggesting his extreme views had only hardened.

“I’ve said before. They are trying to teach us a lesson. They have. But its definitely not the intended lesson,” Robertson allegedly wrote on the Gunbroker.com forum on June 10. “I have learned that if you peacefully protest than you will be arrested, fired, be put on a no fly list, have your name smeared and address released by the FBI so every loon in the US can send you hate mail. I have learned very well that if you dip your toe into the Rubicon. . . . cross it. Cross it hard and violent and play for all the marbles.”

The missive concerned the federal judge, too.

“The undisputed facts demonstrate a concrete risk that Robertson might participate in or provide material support to acts of ideologically motivated violence if released at this time,” Judge Cooper wrote. “His recent social media posts may contain elements of bravado and hyperbole, but they provide evidence that Robertson is sympathetic to calls for a violent ‘revolution,’ […] and has been further radicalized by his pending prosecution.”

“Coincidentally or not, Robertson has also embarked on a remarkable shopping spree for high-powered assault weapons,” the judge continued. “Robertson’s procurement of these dangerous weapons under the surrounding circumstances heightens the risk to public safety, despite the fact that he might have to lie on a federal form in order to take physical possession of them.”

Robertson’s lawyer wrote that the 34 firearms that his client bought while out on bond were “World War II-era guns” that are “nearly all over 50 years or old,” suggesting that these were collectibles.

Rejecting that explanation in a footnote, Judge Cooper wrote: “The record shows otherwise.”

“For example, a government inventory of the guns shows that many of them are recent vintage military-style assault weapons,” the footnote continues.

Robertson’s lawyer Mark Rollins did not immediately respond to an email requesting comment.