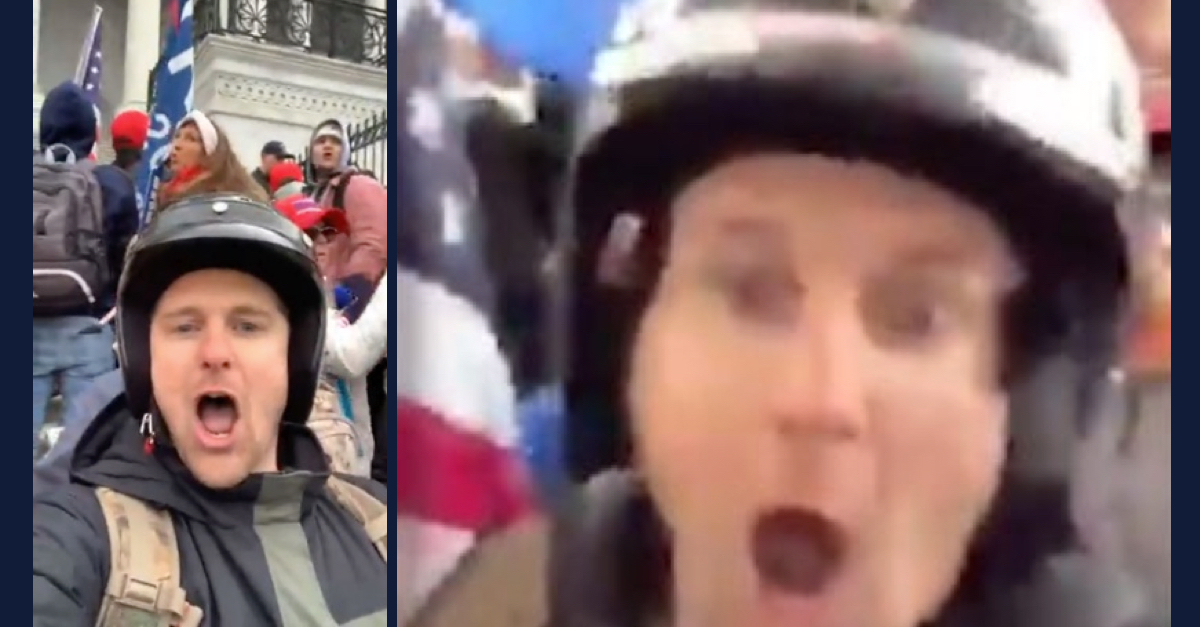 A former West Virginia lawmaker who was recently sentenced to prison for participating in the Jan. 6 Capitol attack has drawn the ire of prosecutors after giving a radio interview in which he appeared to have walked back his previously-stated regret about participating in the riot.

Derrick Evans, 37, livestreamed himself as he entered the U.S. Capitol on Jan. 6 among the throngs of Donald Trump supporters who breached the building that day.

As he got closer to the doors, he continued to narrate: “We’re at the door now. There’s cops on the inside stopping us now.”

Once the Rotunda doors started to open, Evans celebrated: “The door’s cracked! We’re goin’ in!”

“We’re in!” Evans shouted in celebration seconds after crossing the threshold. “Derrick Evans is in the Capitol!”

He stayed inside for about 10 minutes. According to court filings, he later sought to delete the video so that there was “no evidence” of his actions.

Evans pleaded guilty in March to obstructing, impeding, or interfering with law enforcement officers while engaged in the performance of their official duties during a civil disorder, a felony punishable by up to five years in prison and a maximum fine of $250,000.

As part of his plea, Evans acknowledged that he “admits that the civil disorder obstructed, delayed, or adversely affected the performance of a federally protected function.”

At his sentencing hearing last week, Evans insisted that he regretted his actions and that he is a “good person who unfortunately was caught up in a moment.”

On June 23, Evans was singing a different tune, according to prosecutors.

“In a 24-minute radio interview given by Evans on ‘The Tom Roten Morning Show,’ which aired the morning following his sentencing, Evans made several statements inconsistent with the contrition that the government credited and on which the Court relied in imposing Evans’s sentence,” prosecutors wrote in a June 30 Notice of Defendant’s Post-Sentencing Statements.

The government wasn’t asking for a modification of Evans’ sentences. Rather, prosecutors sought to alert the Court to “the speed and degree of Evans’s about face.”

During the interview, the DOJ said “Evans made multiple, self-exonerating statements that are directly contradicted by his own livestream video from January 6, 2021.”

For example, Evans told Roten that he “had no intention” of going to the Rotunda doors.

“I never honestly thought that we was going to be inside the Capitol, never crossed my mind,” he allegedly added.

Evans also allegedly said that “Nobody was trying to get inside [the building] at that point [when the barriers were breached]. They wanted to get to the Capitol steps, basically, make their voices heard.”

Prosecutors say that the defendant’s retelling is “clearly contradicted by the multiple points throughout Evan’s livestream video wherein he verbalizes his intent and the crowd’s intent to enter the Capitol building[.]”

Evans’ statement to Roten that he had video of a “lady police officer” waving rioters into the East Plaza also contradicts the actual video, prosecutors said in the filing.

“In Evans’s livestream video, rioters are screaming as they grapple with bike rack barricades and push against a line of police,” the DOJ said. “There is no police officer visible on Evans’s livestream video waving rioters into the Plaza, and Evans himself states in the video, just after the barricades were breached: ‘They’re in. We’re in. Everybody’s in … There’s too many for them [the police] to do anything about it. Every side, every angle!'”

When Roten asked whether Evans regretted what he did on Jan. 6, the former lawmaker said only that the regrets his current situation.

Evans told Roten that the “worst thing” he saw while at the Capitol that day was when people stood on a statue and took a picture. He also said that while he was fairly elected in 2020 to his lawmaker position, the presidential election was “without a doubt” stolen from Trump. (It wasn’t.)

At the time of the breach, Evans had recently been elected to the West Virginia House of Delegates, taking office on Dec. 1, 2020. He resigned on Jan. 9, 2021, having been quickly recognized as one of the Capitol rioters.

While the case docket didn’t reflect a response from either Evans or Lamberth, the judge has not been shy about why he often questions the sincerity of Jan. 6 defendants at sentencing. He has often bemoaned his decision to issue a sentence of probation to Anna Morgan-Lloyd, who pleaded guilty to a misdemeanor, only to go appear FOX News the next day praising how “calm” and “polite” the rioters were.

“The first sentencing I did, I did a sentence of probation and it turned out to be a serious sentencing error on my part,” Lamberth said in May before sentencing a 69-year-old Idaho woman to two months behind bars. “The defendant seemed contrite at the time and the next day made statements on national TV that were embarrassing to me, as well as her, and it turned out I have a hard time discerning the sincerity.”

“The Court often finds it difficult to ascertain the sincerity of these particular defendants’ remorse,” Lamberth wrote in a March sentencing ruling. “Many defendants appear sincere at sentencing, boasting of their purportedly deep shame, regret, and desire to change and be law-abiding citizens. But this Court is all too familiar with crocodile tears. Indeed, one day after being sentenced to probation, another January 6 defendant made statements in an interview that directly conflicted with the contrite statements that she made to the undersigned.”

In January, Lamberth expressed skepticism as to whether a sentence of probation “sends the right message to the public.”

Evans’ lawyer Paul G. Taylor, who wrote in his client’s sentencing memo that Jan. 6 was an example of “democracy” and positively compared the riot to the American revolution, did not immediately respond to Law&Crime’s request for comment.

Read the government’s notice below.