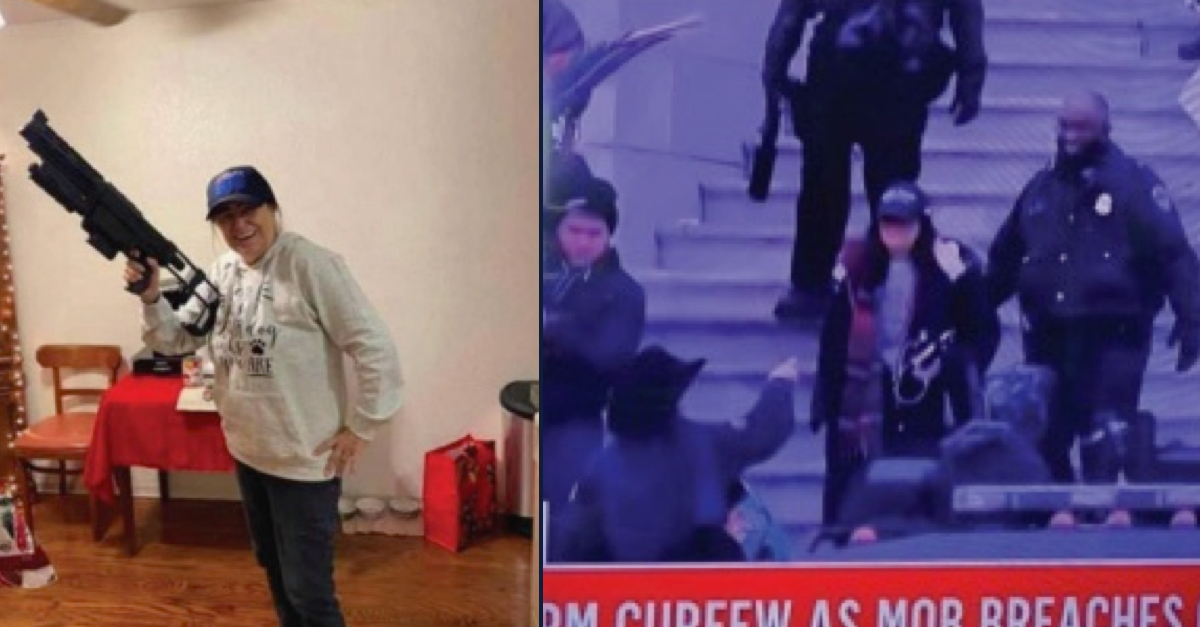 Pam Hemphill leaving the Capitol on Jan. 6, left, and in a photo accompanying a Facebook post announcing that she was going to go to Washington, D.C. on Jan. 6. (Images via FBI court filings.)

A 69-year-old Idaho woman who was seen being walked down the steps of the U.S. Capitol after having breached the building—and encouraging other rioters to do the same—has been sentenced to two months behind bars.

Pam Hemphill, who had flown to Washington, D.C. from Idaho on Jan. 5 to support Donald Trump’s effort to overturn the results of the 2020 presidential election, had pushed through police lines three different times as the crowd outside the Capitol grew increasingly violent. She also encouraged her fellow rioters to push their way inside the building, and she was later seen inside the Rotunda itself.

Prosecutors say that when police offered to help her, Hemphill exaggerated her injuries in an effort to distract officers from more violent protestors.

Hemphill pleaded guilty in January to one count of demonstrating, picketing, or parading in a Capitol building, a misdemeanor punishable by up to six months in jail, a fine up to $5,000, and up to five years of probation.

At Hemphill’s sentencing hearing on Tuesday, prosecutors said that Hemphill presented herself as a frail woman who had been overwhelmed and injured by the crowd, and not as the agitator she truly is.

Prosecutor Katherine Nielsen played video during the hearing that appeared to show Hemphill interacting with police officers who were trying to help her.

“I had to get out of that crowd,” Hemphill could be heard telling an officer. “I had surgery.”

“I understand, I don’t want you being hurt,” the officer said.

“I’m a journalist, they took my breath out,” Hemphill also said.

“I’m sorry for this situation,” an officer replied, before telling Hemphill to take refuge near a gate.

Hemphill, however, did not take any refuge, and a subsequent video appeared to show her encouraging the crowd to press forward into the Capitol instead.

“Just come on in,” she can be heard yelling at the crowd. “It’s your house, whose house does it belong to?”

Later, however, Hemphill presented herself as significantly more frail to other police officers.

“Are you hurt? What were you doing?” an officer could be heard saying.

“I got 40 stitches,” Hemphill could be heard telling the officers, apparently referring to cancer surgery she had had prior to coming to Washington.

Nielsen, the prosecutor, said that these interactions were an attempt by Hemphill to draw police away from protecting the Capitol building as rioters pushed forward.

Hemphill, Nielsen said, “repeatedly asked the police for help while consistently undermining their efforts. She needlessly drew resources from the police at a time they were desperately needed.”

The Jan. 6 melee was not Hemphill’s first time storming a government building: prosecutors say that in August 2020, Hemphill was part of a crowd that stormed the Idaho Statehouse—shattering a glass door in the process—while protesting COVID-19 restrictions.

That protest was led by anti-government militant Ammon Bundy, who has been involved in multiple standoffs with the federal government.

Speaking on her own behalf at her sentencing hearing Tuesday, Hemphill said that she “fully” regretted her actions on Jan. 6.

“I regret everything I did and said at that Capitol,” she said. “Not to excuse my actions, [but] my intentions were to record what was going on, not to be a a part of it. It was as if I was at a football game cheering on the team from the stands and then the fans went on to the field.”

At Hemphill’s sentencing hearing Tuesday, Senior U.S. District Judge Royce Lamberth cut right to the point, telling Hemphill that she will be serving time behind bars.

“As tempting as it is to be lenient in this kind of situation, what I have discerned is it is such a serious offense because it’s such a serious event in the history of our country,” Lamberth said. “I have to agree with the government’s recommendation in this case. I believe that there has to be a penalty when there is a serious offense like this.”

Lamberth, a Ronald Reagan appointee, said that while he believed Hemphill may have been sincere in her apology, he didn’t want a repeat of what happened with Jan. 6 defendant Anna Morgan-Lloyd, who appeared on Fox News and appeared to walk back the remorse she had expressed just one day prior in Lamberth’s court.

“The first sentencing I did, I did a sentence of probation and it turned out to be a serious sentencing error on my part,” Lamberth said. “The defendant seemed contrite at the time and the next day made statements on national TV that were embarrassing to me, as well as her, and it turned out I have a hard time discerning the sincerity.”

In addition to the 60 days in jail, Hemphill will spend three years on supervised release. Pursuant to her plea agreement, she will also have to pay $500 in restitution toward the estimated $2.7 million in damages to the Capitol.