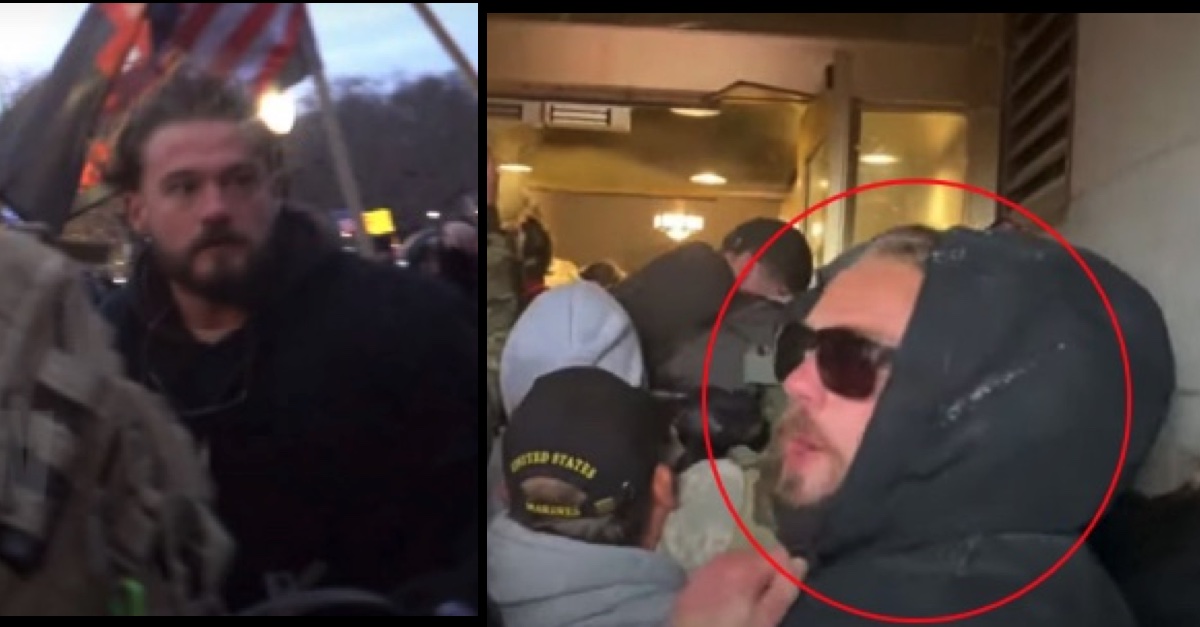 A Florida man associated with the Proud Boys extremist group who hurled multiple objects—including a traffic cone and two chairs—at police outside the Capitol on Jan. 6 has been arrested and charged with assaulting federal officers.

Alan “AJ” Fischer, 28, was arrested Thursday. He has been charged with assaulting, resisting, or impeding federal officers, disorderly conduct, civil disorder, and entering restricted grounds. Fischer’s arrest warrant said that he marched to the Capitol with Proud Boys, flashed their hand gesture, and was identified by a witness as someone who attended the group’s events in Florida, authorities say.

According to investigators, Fischer was an instigator among the mob of Donald Trump supporters seeking to breach the building and stop Congress from certifying the results of Joe Biden‘s win in the 2020 presidential election. He is seen on video throwing a traffic cone, two chairs, and a pole toward a line of police that were trying to push back the crowd of rioters.

But before that, prosecutors say, Fischer helped lead the charge to overwhelm police trying to guard the Capitol building.

“After the crowd overran the line of officers protecting the west side of the Capitol, Fischer moved to the vicinity of the terrace on the west side of the Capitol building where a stage for the Presidential Inauguration was being constructed (the ‘Lower West Terrace’) and positioned himself close to the arched entrance to a passageway that connects the Lower West Terrace and the interior of the U.S. Capitol building (the ‘Archway’ and the ‘Tunnel,’ respectively),” the arrest warrant affidavit says. “At approximately, 2:40 p.m., police officers entered the Tunnel and began to form a protective line with riot shields behind a set of glass inside of the Tunnel. Soon hereafter, numerous rioters entered the Tunnel.”

After entering the tunnel, the affidavit says, “Fischer stopped abruptly, turned around and pulled on his mask and the hood of his hooded sweatshirt, before again facing the line of officers and the Capitol surveillance camera.”

Fischer was then at the front of an effort to push back the police line.

“Between at least 3:16 p.m. and 3:18 p.m., rioters, including Fischer, collectively pushed against the officers – at times rocking together in a coordinated fashion – in an effort to breach the line of officers and gain entry to the interior of the Capitol building. During this time, several rioters took shields from the officers, which the rioters, including Fischer passed back out of the Tunnel. Fischer’s position within the crowd is depicted in Images 5 and 6 below. As depicted in Image 6, Fischer also encouraged other rioters, including by yelling “Push!” while in the Tunnel.”

The line of officers pushed the rioters, including Fischer, out of the tunnel.

Fischer, undeterred, later joined a group of rioters who again “collectively pushed against the officers – at times rocking together in a coordinated fashion – in an effort to breach the line of officers” and reach the Capitol building, the affidavit says.

According to the affidavit, Fischer allegedly yelled encouragement to the crowd as he continued to push against the line of officers. He stayed there for around 45 minutes and “continued to work with other rioters” to overwhelm police, the affidavit says.

Fischer later returns to the west front of the Capitol, and is seen carrying an orange traffic cone on his right hand. According to the affidavit, he also picks up a chair and walks toward scaffolding where police are stationed.

“Seconds later, Fischer can be seen throwing an orange traffic cone and chair in the direction of the officers,” the affidavit says.

Less than two minutes later, Fischer is seen throwing a pole at the line of officers. He then retrieves a second chair and throws it toward the officers, the affidavit says.

According to HuffPost reporter Ryan J. Reilly, Fischer, who had been dubbed “RayBanTerrorist” by online sleuths, was identified by his modeling photos.

“A number of different civilian investigators were working on the case, and one breakthrough came when sleuths got a facial recognition hit on a news story from Tampa Bay that featured images from New Years 2019, including a photo from Fischer’s Instagram page that gave them a lead,” HuffPost reported. “From there, they found additional photos that had been tagged on various social media websites, as well as photos from his modeling career.”

BREAKING: The FBI has arrested a Proud Boy in Florida who was caught with the help of his modeling photos.

Online sleuths had dubbed the man, a military veteran, as “RayBanTerrorist.” https://t.co/exBfXtgQXF

According to the arrest warrant affidavit, investigators used a phone number believed to belong to his current or former girlfriend, identified only as “SV” in court documents, to link Fischer to a Southwest Airlines flight from Tampa to Washington on Jan. 4. An account associated with that number was also used to rent a car from a Hertz in Virginia on Jan. 8, which was returned to a location in Tampa on Jan. 9.

On Jan. 6, Fischer was with a group of Proud Boys that made its way to the Capitol, including a brief stop at food trucks located near the building, investigators say.

Two other Florida men—Zachary Johnson, a 33-year-old from St. Petersburg, and Dion Rajewski, a 61-year-old from Largo—were arrested on Thursday. All three faces civil disorder and other offenses. Fischer and Rajewski are also charged with assaulting, resisting, or impeding certain officers with a dangerous weapon.