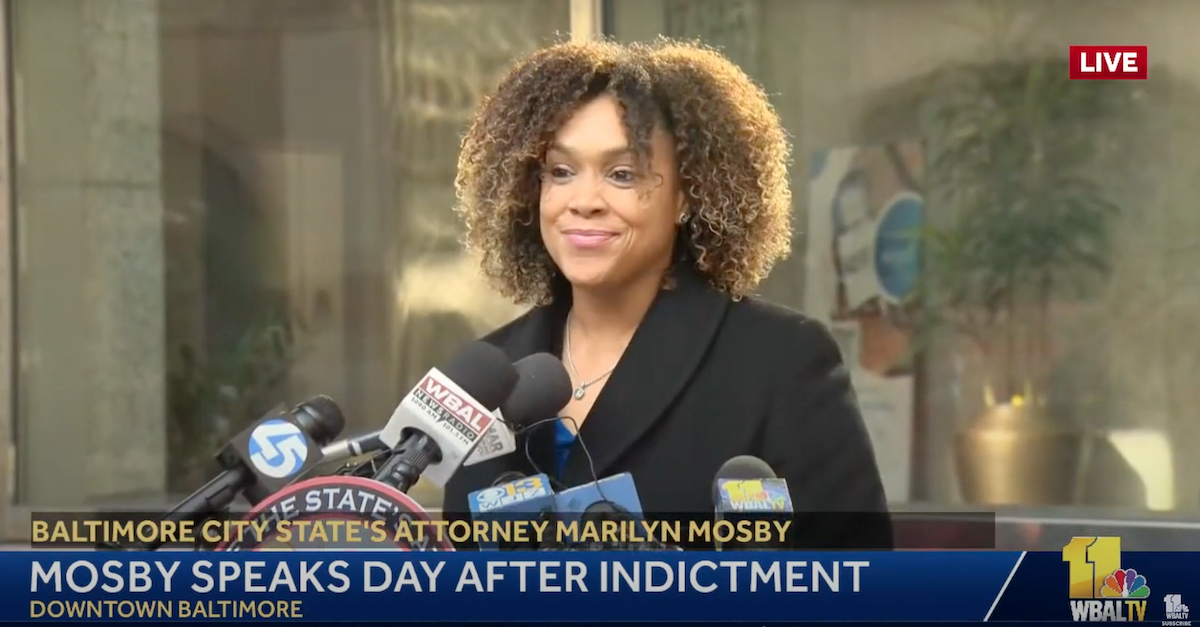 Marilyn Mosby speaks about a federal indictment filed against her. (Image via WBAL-TV/YouTube screengrab.)

Marilyn Mosby, the top prosecutor in Baltimore, Md., on Friday said she was “innocent” of a series of four charges filed against her via a federal indictment the day before. She then blamed “political opponents” in the local U.S. Attorney’s Office for seeking to prosecute her shortly before she was up for reelection.

In a brief speech, Mosby, a Democrat, said she was “wholly committed” to her job as State’s Attorney and that she was planning to continue “to carry out the mission of creating a safer, healthier community for everyone.”

“I also need citizens, who I am blessed to serve, to know that I am innocent of the charges that have been levied against me, and I intend to fight with every ounce of energy within my being to prove my innocence and to clear my name,” Mosby continued.

“I’ve done nothing wrong,” Mosby later said. “I did not defraud anyone to take my money from my retirement savings, and I did not lie on any mortgage application.”

Mosby claimed that the U.S. Attorney and the lead prosecutor who were building the federal case against her had refused to allow her to show her innocence to the grand jury that indicted her.

She also accused the lead prosecutor in the case against her of having “donated to” her “political opponents” and of having a “personal animus” against her. She did not name who that prosecutor was.

Mosby did not mention that under the Federal Rules of Criminal Procedure, defendants do not have an explicit right to appear before a grand jury. Under the rules, those who “may be present” include only “attorneys for the government, the witness being questioned, interpreters when needed, and a court reporter or an operator of a recording device.” The witness being questioned is, of course, called by the government.

As Law&Crime reported Thursday, Mosby is accused of two counts of perjury and two counts of making false statements on loan applications. The indictment accuses Mosby of using COVID-19 hardship exemptions made possible by the federal CARES Act to pull money from a personal retirement account without suffering any cognizable hardships. (Indeed, the indictment says, her salary went up year to year.) The money, according to the indictment, funded Mosby’s purchase of a vacation home in Kissimmee, Fla. The indictment says Mosby also failed to pay federal income taxes and failed to note on loan application documents that she owed a debt to the federal government. The purchase of a Long Boat Key, Fla. condominium, a second Florida home, was also involved, according to the indictment.

A significant portion of Mosby’s Friday speech — she said she would not take any questions and referred reporters to her lawyer — was directed toward recapping her career.

“As a Black woman, a lawyer, a wife, and a mother looking to serve my community, I sought elected office because I knew there was so much more we could do and should be doing to bridge the divide between the criminal justice system and the communities that we are entrusted to serve,” she said. “No one thought I could win. We had very little money and even less name recognition, but we knew that things had to change in the City of Baltimore and around this country — and, so, we fought.” 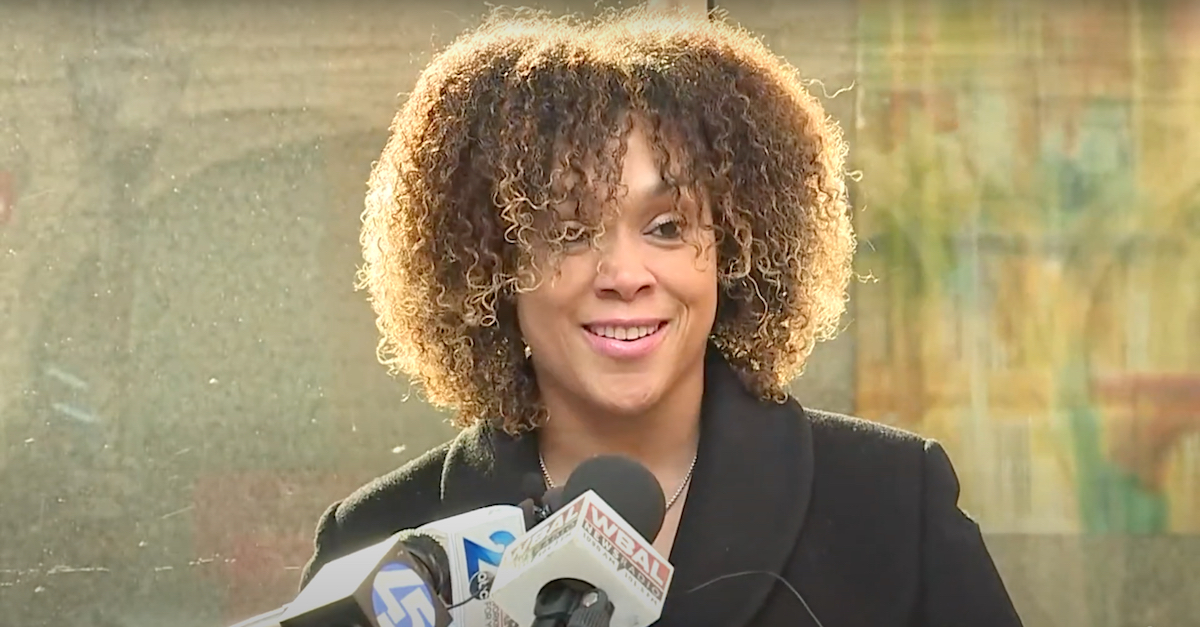 Marilyn Mosby speaks about a federal indictment filed against her. (Image via WMAR-TV/YouTube screengrab.)

Mosby spoke of “long hours,” “sleepless nights,” and missed family events she had to endure on the job. She said she “expected the job to be hard” and anticipated these sacrifices and criticism from both the public and the press — but she then discussed what she says she did not expect:

Mosby then said she was “not shocked” to find herself where she is because she has “had a target” on her back ever since filing charges against six police officers in the death of Freddie Gray, a Baltimore arrestee who died in custody on April 19, 2015.

Mosby said the same federal prosecutors and the same U.S. Attorney’s Office which secured Thursday’s indictment against her had previously warned her not to file charges in the Freddie Gray case. That office also warned her to back off in another high-profile case involving a weapons tracing scandal, she claimed.

Mosby cast herself as a public servant who sought to champion equality, to prosecute police officers “for violating the rights of citizens,” and to decriminalize “drug possession and sex work.” She also said she exonerated 12 Black men “for crimes they didn’t commit.”

“This is not what prosecutors usually do,” Mosby said, “and many people will forever hate me for it.”

Mosby said “powerful institutions,” including Donald Trump and his administration, targeted her because of her “commitment to racial justice.” She also said she had been subjected to “consistent harassment of the Fraternal Order of Police” and also lambasted “the right-wing media.”

She again reiterated that she wanted to “state unequivocally” that she was innocent. She then quoted Isaiah 54:17 before wrapping up the speech.

“Please don’t be fooled,” she concluded. “We are now five months from my next election, and this indictment is merely a political ploy by my political adversaries to unseat me.”

Mosby then left the podium after speaking for almost exactly nine minutes.